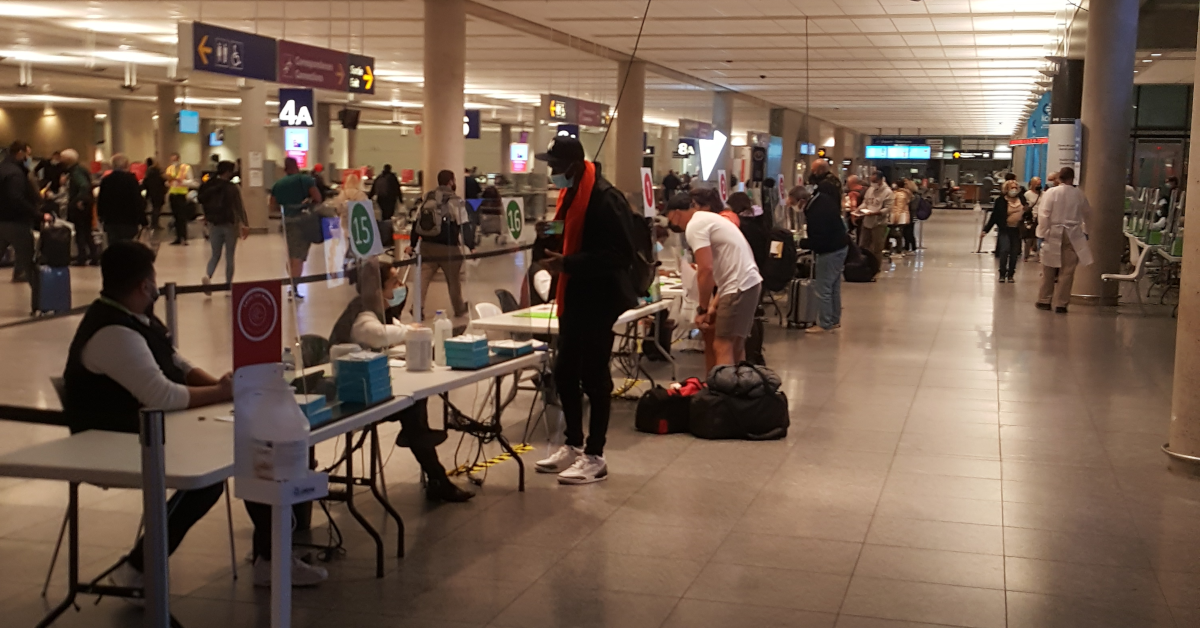 COVID-19 tests are required upon arrival in Canada for (certain) travelers. And as with many travel rules, many travelers are a bit confused about this rule. In this case, there are actually separate and different rules… so for once it is very understandable that many are confused.

Here is a clarification on the tests done upon arrival in Canada.

To be clear, as mentioned in our introduction to COVID-19 tests for travel, there are 2 possible timings for tests that may be required by a country:

The first one is much more common (but there are still 47 countries that do not require any test at all, including the one we are going to next week ourselves).

But Canada is now among the few countries that require both!

You can never have enough restrictions for travelers here. It’s popular with the public so that’s what counts, regardless of the facts.

Even though the Public Health Agency of Canada has been saying for literally over a year that travel is not a major cause of infection according to the data. Even though the panel of scientific experts assembled by the government itself has said that Canada’s testing approach is “excessive” after analyzing it thoroughly.

So, in short… (almost) all travelers over the age of 5 still have to take a pre-departure test to enter Canada. That hasn’t changed since the beginning of 2021 (except for an exemption for trips of less than 72 hours… which already no longer exists).

I say “almost” all travelers because those who have tested positive in the last 6 months can benefit from an exemption… but it’s not as simple as it sounds. This is by far the most common question we get these days, so we’ll be publishing the article on this topic tomorrow (sign up for our free newsletter to get many tips for travelers).

So the arrival tests are in addition to the pre-departure test requirement of course.

Canada has 2 completely separate rules for arrival testing and that is why many people are a little confused about this.

As we’ve already explained, most people don’t know what they’re talking about when it comes to travel rules, so don’t ever rely on what you read or hear if you want to understand correctly and get the right information.

Anyway, in the case of testing on arrival (if you are selected to do it; not everyone is tested), there has been a lot of confusion about whether or not you need to isolate while waiting for the test results.

And few travelers seem to know that there are 2 rules. Hence the need for this article.

Yes, it’s too complicated for nothing and we agree that the government should make it simpler… but those are the rules.

So the 2 separate rules if you happen to be selected for the test upon arrival in Canada are based on where you have been in the previous 14 days:

If you have only been to the United States, you ARE NOT required to self-isolate while waiting for the results of the test done upon arrival (and your odds of being tested are much lower).

If you have been somewhere other than the United States, you ARE required to self-isolate while waiting for the results of the test done upon arrival.

It’s very simple once again, when you take the time to understand and when you understand that there are separate rules.

Other highlights of the arrival testing rules

I’m putting together an ultimate guide to the arrival testing rules for you very soon, in addition to a major update to the resources to help you travel during the pandemic that’s actually going to be a whole new (and awesome) section where you can find content easier.

But in the meantime, in both cases, as mentioned, right now the tests are only random.

But for those who have been somewhere other than USA, the goal is that “soon” 100% of travelers will be tested upon arrival. (It’s been “soon” since like November though; the legendary speed of our federal government at its best, again.)

As for those who have been only to the USA, there is no intention to test 100% of travelers, so it’s really a random selection. The government didn’t provide data on the percentage of travelers who were selected.

Anyway, even if you are selected for a test after a trip to the US, it doesn’t change anything in your life, as you don’t need to self-isolate while waiting for the result.

For those of you who have been somewhere other than the US, you can pre-register for your test if you want, but it is not mandatory and it may not be such a good idea to do so, depending on your philosophy. I’ll explain in the detailed guide next week.

And for all the tests done on arrival, the other conditions are the same no matter where you have been:

By the way, the rules for testing on arrival are different for non-vaccinated Canadians. Yes, they are still allowed to enter, it never changed… another example of people mixing up separate rules: The requirement to be vaccinated is for flights departing from Canada, it has nothing to do with entry rules. All non-vaccinated travelers have to quarantine for 14 days in addition to being tested on arrival (day 1) and also in the middle of the quarantine (day 8). That hasn’t changed in a long time either. What has changed is that they can no longer take a connecting flight after entering the country.

Anyway, that’s why some travelers said they didn’t have to self-isolate while awaiting their results and involuntarily misled other travelers: They had only been to the United States in the 14 days before entering Canada.

Having spent a week in Miami in December, where barely 60% of the population is fully vaccinated, where I didn’t even have to put on a mask once, where all restrictions related to COVID-19 have been removed for over a year… it’s pretty weird that the new rules exclude the US.

Of course, there are too many travelers going to the United States and we don’t have the capacity to test everyone. But why not require those arriving from the US who are randomly selected for testing to self-isolate while waiting for the results as well?

That doesn’t require any more work or capacity. It would make the rules more uniform, less confusing.

What’s the science behind not having to self-isolate while qaiting for your test results when you have been to one of the countries with the highest infection rates in the world… but having to do so for every other country?

Regardless of the fact that having 2 rules that are so similar confuses many travelers… it doesn’t even make sense.

Also, since all provinces are now short on testing capacity, many experts are starting to question whether it is worth investing all these resources to test all travelers upon arrival when they have all been tested already in the previous 72 hours…

That being said, it would obviously be better for Canada to remove its requirement for pre-departure testing (to eliminate the risk of testing positive while traveling) instead of removing the test upon arrival which is better for us travelers… to be continued.

Want to get all our tips for pandemic travel?

This is an important clarification on testing upon arrival in Canada. There are 2 completely separate rules. Those who are selected must self-isolate while awaiting the results only if they have been somewhere other than the USA in the previous 14 days.

What would you like to know about arrival testing in Canada? Tell us in the comments below.

Masks are no longer required on planes in 3 European countries

Traveling during COVID-19 (part 1): going out of Canada after 2 years