There are so many myths in the world of travel, but some are a lot more (or a lot less) important than others. In all cases, as travel experts, we want to debunk them all.

If you read our articles, you might have noticed that personally, I hate when people spread falsehoods without checking if it’s true. So I try to do my part here, at least for everything travel-related (for all the other fake news, sorry that isn’t the topic of our website ?).

People rarely have bad intentions; it’s simply that they really believe these myths are true because no one has told them they weren’t.

This myth won’t change the world, but since many people seem to believe in it, let’s make sure it’s clear: yes, nail-clippers are allowed on planes (in the cabin with you) in most countries.

Tweezers too. Small scissors too. Even small knives (except for the USA for that one). For the others, it applies to the trio of destination that represents a majority of the flights Canadians take: Canda/USA/Europe.

So if you buy a low-priced flight on our cheap flight deals page, you can be reassured: even if 90% of the deals we spot are not on ultra low-cost carriers and include the same bag allowance as regular price flights (contrary to another myth), you can choose to travel light.

By traveling “carry-on only”, you’ll still be able to bring everything you need, including nail clippers (and it’s so much more pleasant to travel this way).

I’ve taken 300+ flights and have always traveled carry-on only. And, at least for all those I can remember in the past years, I’ve always brought a nail clipper without any issues.

But many still seem to (wrongly) think that it’s forbidden.

So here’s the proof for those who don’t believe us (but rest assured we don’t make stuff up and spread fake news for the fun of it).

We’ll be covering many other myths, including an awesome special guide with 15 Travel Myths Debunked: join 50,000+ Canadian travelers and sign up for our free newsletter to never miss great travel content (and our half-priced flight deals).

Proof that nail clippers are allowed on planes

I honestly don’t even know where this myth comes from, but it doesn’t really matter. What matters is that everyone knows those nail clippers are allowed in your carry-on bag.

I was able to find irrefutable proof with a Google search that took about 12 seconds (as is the case for many questions).

The CATSA (in charge of ariport security) has a very useful search tool on its website, so you can see if an item is approved or not. 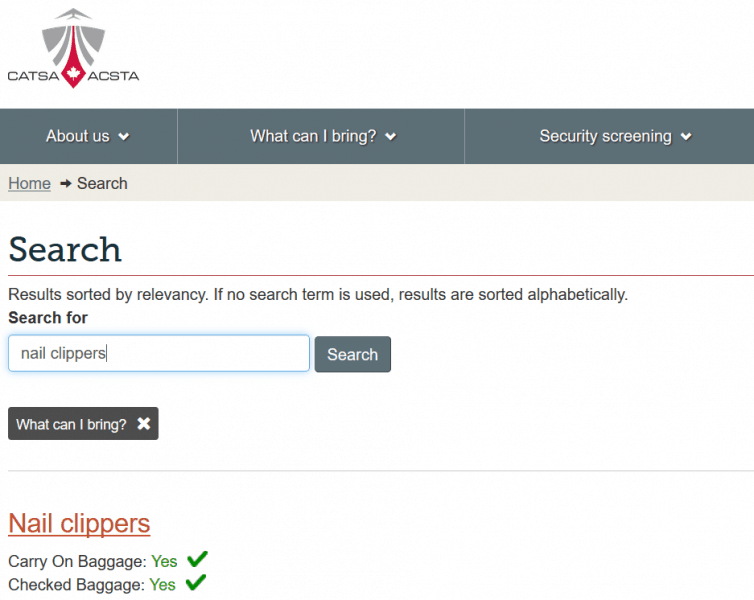 On the other hand, the United States often have their own rules. That’s what I mentioned earlier about small knives, as they are the only major country that doesn’t allow them on planes.

But for nail clippers, no need to worry if you are heading to our Southern neighbors (or if you are connecting there), as you can see on the TSA’s own search tool.

Same goes for tweezers and small scissors, I always bring mine and have never had any problems.

As mentioned though, this is for Canada/the United States/the European Union. Other countries all have their own rules and if you want to be absolutely sure you can check individually.

Personally, in my experience traveling to 50 countries, I’ve never had a problem anywhere. But that might be explained by the fact that even in the US, studies show that security checks consistently miss 80% of prohibited items. That’s probably true in every country.

By the way, it’s just a great opportunity for me to talk about one of my favorite sayings: just because you can, doesn’t mean you should.

I’ve now seen quite a few travelers clipping their nails at the airport, on the plane (!!!) or even in the sanctity of airport lounges. No matter your opinion on those who walk barefoot on the plane (that’s a heated debate it seems), we can at least all agree that clipping your nails anywhere public is wrong, right?

If you think that’s acceptable, ignore this entire article okay, for you, nail clippers are indeed forbidden in carry-on bags?.

So there you have it, joking aside, you are allowed to bring your nail clippers and your 100 mL liquids of course, and so as I’ve done for trips as long as 6 weeks, you can leave with just a carry-on.

No matter where you’re going, it’s a crazy concept, but they too have stores?. Except maybe in the middle of the jungle, although I just got back from a trip in smaller cities in Senegal and even they had almost everything there, albeit with a lot fewer options in terms of brands than the 40+ other countries I’ve been (but still).

It seems to be something keeping travelers from trying to travel light, and it really shouldn’t. You’ll be able to buy whatever you need to refill, like shampoo for example. And if you choose a destination where you can travel for less (where the cost of living is the lowest), the same shampoo brand you buy in Canada will probably even be cheaper there.

The only exception is sunscreen and bug spray, bring a couple of 100 mL of those always, I’ll share that in a future article.

Yes, contrary to popular belief, nail clippers are allowed on planes. As are tweezers, small scissors and even small knives (except in the US for the latter). Therefore, there is no good reason not to travel light; you can bring everything you need.

Did you know about this? Share it with us in the comments below!

5 Longest Bridges In The World