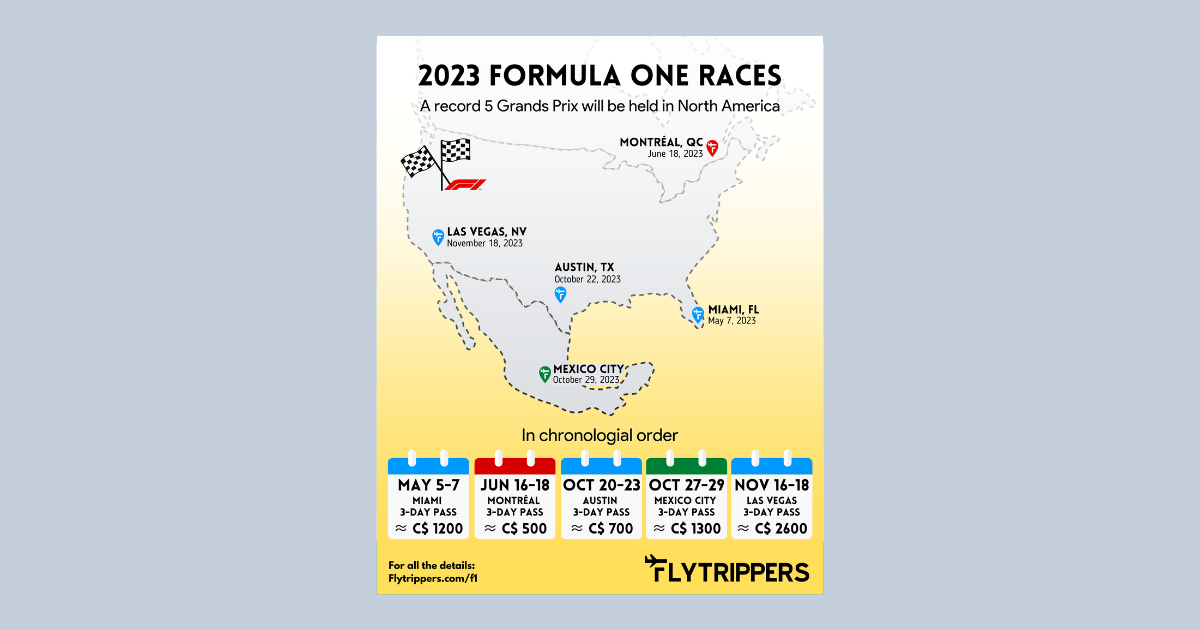 For the 1st time ever, a whopping 5 Grand Prix races will be held in North America during the 2023 Formula One World Championship, in all 3 continental countries! That is thanks to the addition of a new night race on the Las Vegas Strip, which will certainly become an iconic event.

Since our post about the 2026 FIFA World Cup in North America was popular, here’s an intro to the 5 North American F1 races, including prices for 3-day passes (spoiler alert: it’s not cheap) and even a teaser for hotel prices.

Map of the 2023 Formula One Grands Prix in North America

Here’s the map of the 2023 Formula One season’s 5 Grands Prix races in North America.

The longest-running of the 5 North American Grands Prix is right here in Canada.

Held in Montréal almost every year since 1978, there have been 57 Canadian Grands Prix in total.

It will once again be held at Circuit Gilles Villeneuve, named for the father of the only Canadian to ever win the F1 driver championship, Jacques Villeneuve. An F1 driver in his own right, Gilles died tragically in a crash during a qualifying session in Belgium. The circuit is on Notre Dame Island, right next to Downtown Montréal in the middle of the Saint Lawrence River.

On the 2023 F1 calendar, the Canadian Grand Prix will be the 2nd race in North America and the 9th in total. It’s almost always held in June, so nothing is changing.

Montréal is a great city to visit in the summer, and Grand Prix week is usually very festive, as you can imagine.

Here’s a map of hotel prices in Montréal on the Saturday night before the race:

For the 1st time in 40 years, there will be 3 Grands Prix in the United States.

In part because of the infamous Indianapolis debacle (when only 6 cars raced because of a technicality), the US did not have any F1 races for 4 seasons. Since 2012, the United States Grand Prix has returned and has now been run 51 times overall.

It’s now held at the Circuit of the Americas in Austin, the capital of Texas. It’s the 1st circuit that was purpose-built for F1 in the US, and it’s located about 30 kilometers from downtown, on the eastern edge of what’s known as the Texas Hill Country.

On the 2023 F1 calendar, the United States Grand Prix will be the 2nd race in the US, the 3rd in North America, and the 19th in total. It keeps its calendar spot, as it has always been held in late October or early November.

Austin is such a fun city, very different from Dallas, Houston, and San Antonio. Leave your Texas stereotypes at home.

Here’s a map of hotel prices in Austin on the Saturday night before the race:

Last year, the US got its 2nd F1 race. The inaugural Miami Grand Prix was a hit, as was to be expected since Miami is such a great fit for F1.

It will again be held at the Miami International Autodrome, a purpose-built temporary circuit that is installed in the parking lot around the NFL’s Miami Dolphins’ stadium, in the suburb of Miami Gardens. It’s about 30 minutes from Downtown Miami, depending on which level of Miami traffic you get (either the baseline horrible or the very common, even worse levels).

On the 2023 F1 calendar, the Miami Grand Prix will be the 1st race in North America and the 5th in total. Like last year, it will be in early May, probably to avoid the torrid Miami summer heat.

Miami is one of my favorite cities in the world, which is why I’ve been there 30+ times. And I don’t even like beaches, so there really is a lot to see and do other than just enjoying the tropical climate.

Here’s a map of hotel prices in Miami on the Saturday night before the race:

The inaugural Las Vegas Grand Prix, the US’s 3rd F1 race, will take place directly on the Las Vegas Strip, arguably the most well-known street in the world. It will be the 1st night race in North America (or even in the Western Hemisphere, if I’m not mistaken). It will also be held on a Saturday, not on Sunday.

The Las Vegas Street Circuit will feature many Vegas landmarks, like the fountains at the Bellagio and almost all of the famous themed hotels. Vegas did have F1 races in 1981 and 1982 (which was the only time the US had 3 races in the same year), but those were held entirely in the parking lot at the Caesars Palace, not quite as appealing a setting.

Las Vegas is a very popular destination, as the so-called entertainment capital of the world. It’s very touristy and artificial, but a lot of people love that. If you like gambling, shows, and nightlife… there’s certainly a lot of that.

Here’s a map of hotel prices in Las Vegas on the Saturday night of the race:

For those who want a little bit more of a culture shock, this one is your best option in North America obviously.

The Mexican Grand Prix has been held every year since 2015 (except for 2020) after a 20 year hiatus and has now been run 23 times overall.

It will once again be held in Mexico City at the Autódromo Hermanos Rodríguez, named after 2 brothers who were drivers and who both died while racing. The circuit is unique in that it is located in the middle of the city, just 8 kilometers from the historic center of the Mexican capital.

On the 2023 F1 calendar, the Mexican Grand Prix will be the 4th in North America, and the 20th in total. It keeps its calendar spot, as it has always been held in late October or early November since the 2015 revival.

The Mexican capital city is a huge metropolis with something for every type of traveler. The metropolitan area is actually the most populous in all of North America, with more inhabitants than New York City! It’s a vibrant city with so many attractions.

Here’s a map of hotel prices in Mexico City on the Saturday night before the race:


Want to receive more inspiring content to plan your next trip?

For the 1st time ever, 5 Formula One Grand Prix will be held in North America in 2023! So whether you want to soak in the atmosphere of the Mexican capital before a race or hear the roar of engines under the Vegas Strip lights, this is a great opportunity for fans of racing and travel!

What would you like to know about Formula One Grands Prix all over the world? Tell us in the comments below.

Where to go on a Quick Stopover in Mexico?