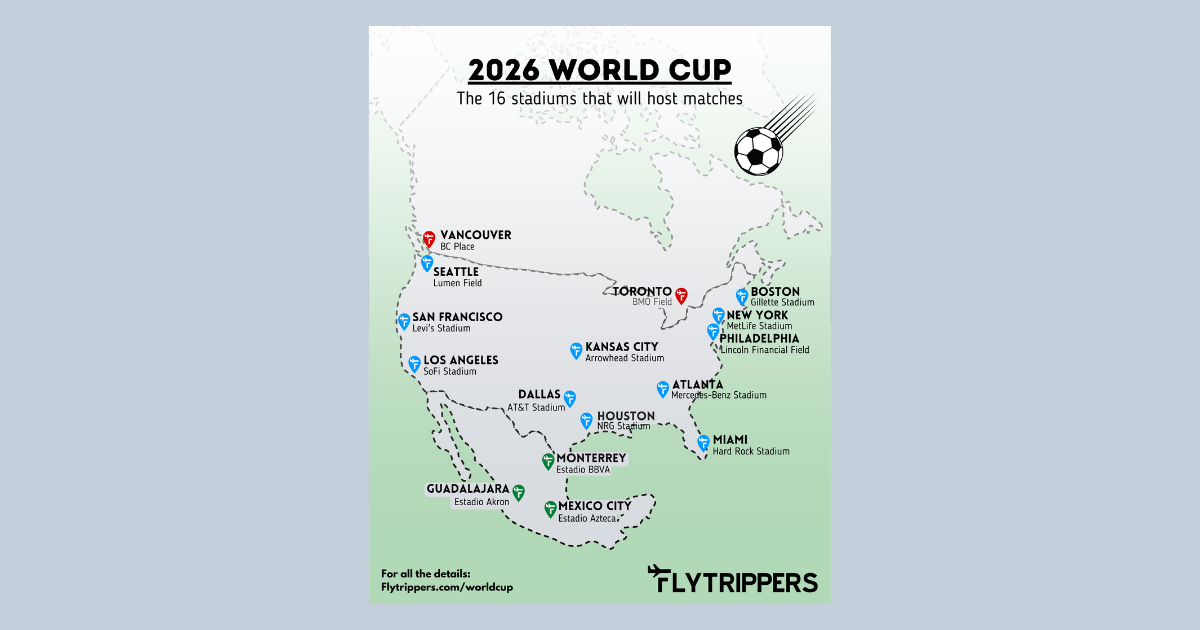 The 2022 World Cup just concluded, and you might be wondering where exactly the next edition will take place. It will be the first World Cup to be hosted by 3 countries: Canada, the United States, and Mexico. Here’s our map of the 16 locations on the list of World Cup 2026 stadiums, along with a bit of info on each city.

All but one of the stadiums are stadiums that normally host handegg games (American/Canadian football), except in Mexico, where the other football is a lot more popular.

A total of 80 matches are planned, but the exact format could still change until then, as the number of participating countries is increasing by 50%, reaching 48 teams.

The map of the 2026 World Cup locations

Only 2 cities in Canada will host matches, 10 in total.

BMO Field is the home stadium for the Toronto FC Major League Soccer team. It’s located just west of Downtown Toronto, along the lakefront. It’s the only stadium on this list in Canada and the USA that is a soccer-specific stadium which means it’s too small for FIFA standards and will need to be expanded to be used for the World Cup.

Toronto is Canada’s most populous city by far and there’s so much to do there. But since there are so many ultra low-cost carriers now offering really cheap flights to Toronto, you can go just for a match too. We often spot deals for $100 roundtrip on our cheap flight deals page.

BC Place is the home stadium for the BC Lions, in the Canadian Football League. From the outside, it’s a stunning stadium and it’s very well-located in the very walkable downtown area of Vancouver.

Vancouver is Canada’s 3rd most populous metropolitan area, and arguably the most beautiful one, with such a great natural setting around it. You don’t even need to leave the city to feel like you’re in a different world, with beautiful Stanley Park giving you great water and mountain views.

A total of 11 cities in the United States will host matches, and all games will be held there starting with the quarterfinals, with 60 in total.

MetLife Stadium is 1 of only 2 shared stadiums in the National Football League, being the home of both the New York Jets and the New York Giants, even though the stadium isn’t even in the state of New York. Located on the other side in a rather ugly part of New Jersey, there is nothing around except a giant shopping mall.

SoFi Stadium has brought 2 NFL teams back to the 2nd most populous metropolitan area in the country, after a couple of decades without any teams. It’s the home of the Rams and Chargers (but is more often overrun by fans of opposing teams). The stadium is located near the airport, quite far from everything (as is the case for everything in LA, really).

The city of angels needs no introduction. With its mild year-round climate, numerous attractions, and beautiful beaches, Los Angeles is one of the most popular destinations in the country.

The home of the iconic Dallas Cowboys team, AT&T Stadium is the one that got the ball rolling for mega stadiums in the United States. The urban area of Dallas and Fort Worth is absolutely huge and the stadium is pretty much in the middle between the 2 downtowns.

Dallas is not an option that is often considered for a getaway in the United States but being the 4th largest metropolitan area, there is plenty to see and do. And it’s certainly more of a change of scenery to be in Texas than in many other places.

NRG Stadium is the home of the Houston Texans in the NFL. It is located not too far from downtown.

The 5th most populous metropolitan area in the country, not many people know this but Houston is also the most diverse city in the US (in terms of race and ethnicity)! I enjoyed my trip there this summer, I’ll soon be sharing highlights of this destination that deserves to get more attention.

Lincoln Financial Field is the home of the Philadelphia Eagles in the NFL. It is located in the southern part of the city.

Philadelphia is the 7th most populous metropolitan area in the country and one of the most important in the country’s history. It’s an absolutely great city to visit!

Mercedes-Benz Stadium is the home of the Atlanta Falcons in the NFL, conveniently located right downtown. Its unique design definitely stands out. It is known for its affordable food prices and its famous Chick-fil-A inside, which, like all others, is closed on Sundays (the day most football games are played).

Atlanta is the 8th most populous metropolitan area and it’s a fast-growing city, as are most of the southern cities. On the travel side, it is best known for having the busiest airport in the world, courtesy of the Delta hub.

Hard Rock Stadium is the home of the Miami Dolphins of the NFL. It is one of the oldest on this list, but it has been completely renovated. It is located kind of in the middle of nowhere, in the suburb of Miami Gardens. It’s the only one on this list where I’ve been to games and it’s a great experience, especially with the tailgating before the football games (both for the Dolphins or the Hurricanes at the college level).

Miami is the 9th most populous metropolitan area in the country and one of the most popular destinations in the world. The Latin and Caribbean influence, the tropical climate, and the countless activities and events make it one of my favorite cities to go to personally.

Gillette Stadium is the home of the New England Patriots in the NFL. It is located in Foxborough, which is closer to the Rhode Island state line than it is to downtown Boston.

That said, Boston, the 11th most populous metropolitan area in the country, is an absolutely beautiful city, one of my favorites of the many I have been to in the United States.

Levi’s Stadium is the home of the San Francisco 49ers in the NFL, but it is located about 70 kilometers from the city in Silicon Valley.

San Francisco is the 13th most populous metropolitan area, but that excludes Silicon Valley (San Jose and surrounding areas), which is also very populous and close enough to have the team’s stadium. SF is one of the most popular destinations in the US and it’s true that it’s a beautiful city, although recently, it seems that several neighborhoods are experiencing issues that have been well-publicized.

Lumen Field is the home of the Seattle Seahawks in the NFL, one of the loudest in the league. It is located just south of downtown.

The city of Seattle is the 15th most populous metropolitan area and the metropolis of the Pacific Northwest region, known for its iconic Space Needle. On one side you have water and on the other, you have a stunning view of Mount Rainier. A little-known fact, the city is further north than Toronto and Montreal.

Arrowhead Stadium is the home of the Kansas City Chiefs in the NFL. Kansas City is located in Missouri, not Kansas (although the city is on the Kansas border at least). The stadium is in the middle of nowhere in the city’s southeastern suburbs.

Kansas City is the 31st most populous metropolitan area and is rarely among the most popular destinations. But sometimes, those are the best places to go to, maybe that’s the case for KCMO! It’s one of the cities with the most fountains, it’s got lots of grand boulevards, and urban parks and is known for jazz and barbecue.

Only 3 cities in Mexico will host matches, 10 in total, like Canada.

Estadio Azteca is the home of Club América and Cruz Azul in Liga MX, the highest level of competition in Mexican football. Once a year, the handegg variety of football is played there too, in the NFL International Series. It’s the largest stadium in Mexico and all of Latin America.

The Mexican capital city is a huge metropolis with something for every type of traveler. The metropolitan area is actually the most populous in all of North America, with more inhabitants than New York City! It’s a vibrant city with so many attractions.

Monterrey is Mexico’s 2nd-most populous area, the metropolis of the northern part of the country. It’s not a city that many people visit, but it apparently has a lot to offer.

Estadio Akron is the home of C.D. Guadalajara in Liga MX. It’s located on the extreme outskirts of town, on the west side.

Guadalajara is Mexico’s 3rd-most populous metropolitan area, known as one of the country’s cultural hubs. You’ll find Mexican classics in food and music, with beautiful architecture too.

If you want to experience the World Cup in person during the next edition, you can go to one of the cities on this list of locations for the 2026 World Cup.

What would you like to know about the World Cup in 2026? Tell us in the comments below.

Which Country Has The Most Time Zones