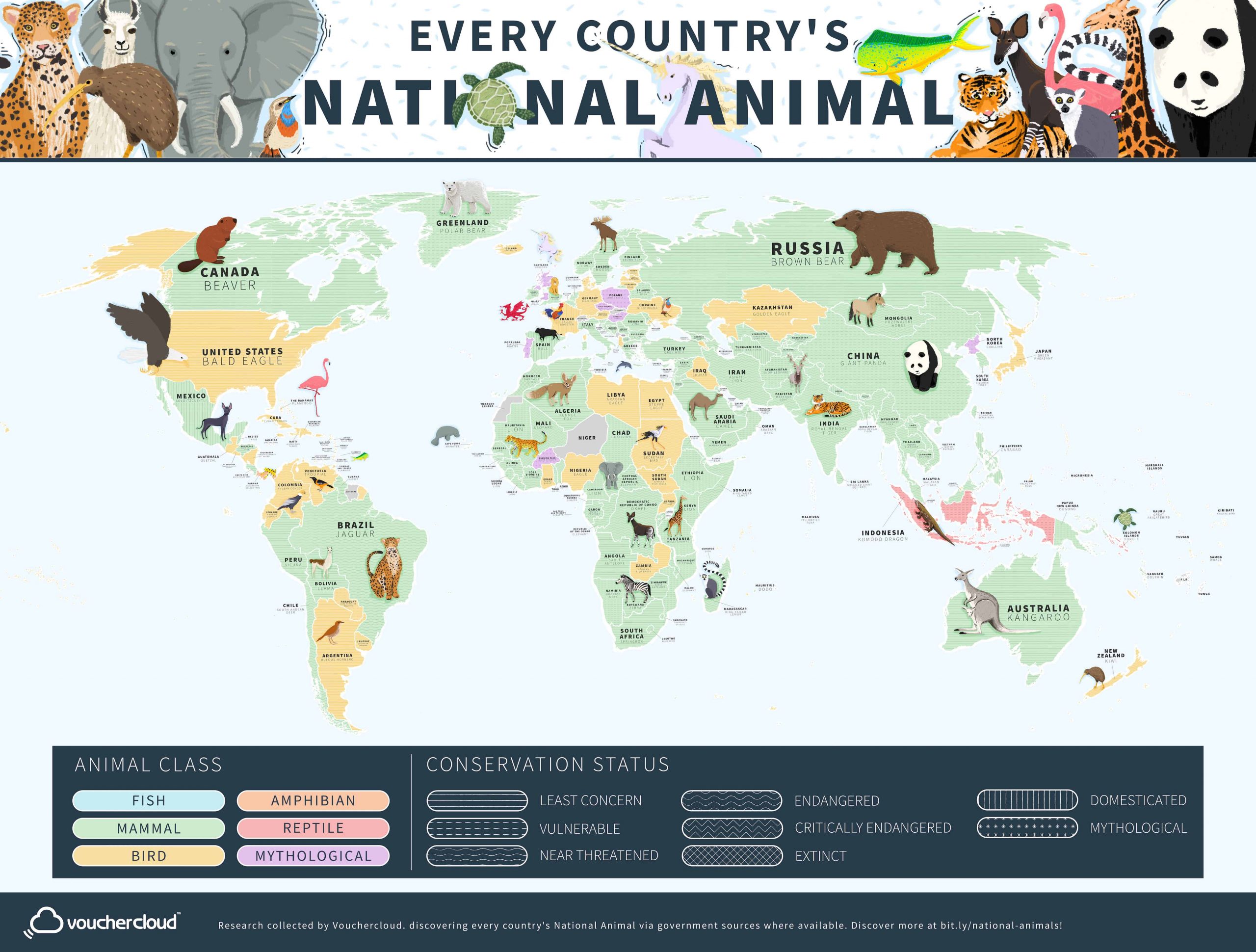 Animals are adorable! Who can argue with that? All the countries in the world seem to agree—they use all kinds of animals as their national symbols. Almost every country in the world has an official national animal, and some have more than one.

America’s bald eagle is one of the most widely known national animals. Canada has two national animals: the well-known beaver, and also the lesser-known Canadian horse (that is not even on the map below).


Some countries even choose mythological creatures as their national animals: Wales* has the dragon; Scotland* has the unicorn; and Singapore went even further and designed a new animal, the Merlion, which is half fish half lion.

*Scotland and Wales are “countries”, but not “sovereign states”: we’ll explain the difference in a future article

Let’s take a look at the map, the most common types of national animals, and which among them stand out.

You can see the full-size version to read the small print.

Just by looking at all the green on the map, it’s quite apparent that mammals dominate the list, because yes, the map is color-coded:

Let’s take a look at the numbers for each:

The map also shows the conservation status of the animals: if you zoom you’ll see the patterned backgrounds. You’ll notice that more than 30 of the national animals are extinct or critically endangered, and more than 40 are considered vulnerable.

National Animals That Stand Out

Some national animals are surprising since they aren’t typical symbols of their countries at all.

In Europe, for example, several countries use the lion as their symbol, even though it’s not a particularly lion-heavy part of the world.

The lion is so popular, in fact, that it’s now the national animal for 19 different countries (it’s by far the most common one).

Other national animal symbols are often part of a country’s attempt to create a visual representation of its people’s goals, values, and history and are very emblematic, while others are just unique and we’ll look at these by category.

Some national animals are well-recognized symbols of their countries, such as:

Do you want to get more cool maps like this in your inbox?

Is there a country you’ve visited that has a cool national animal? Which national animal are you surprised to learn about? Share with us in the comments below!