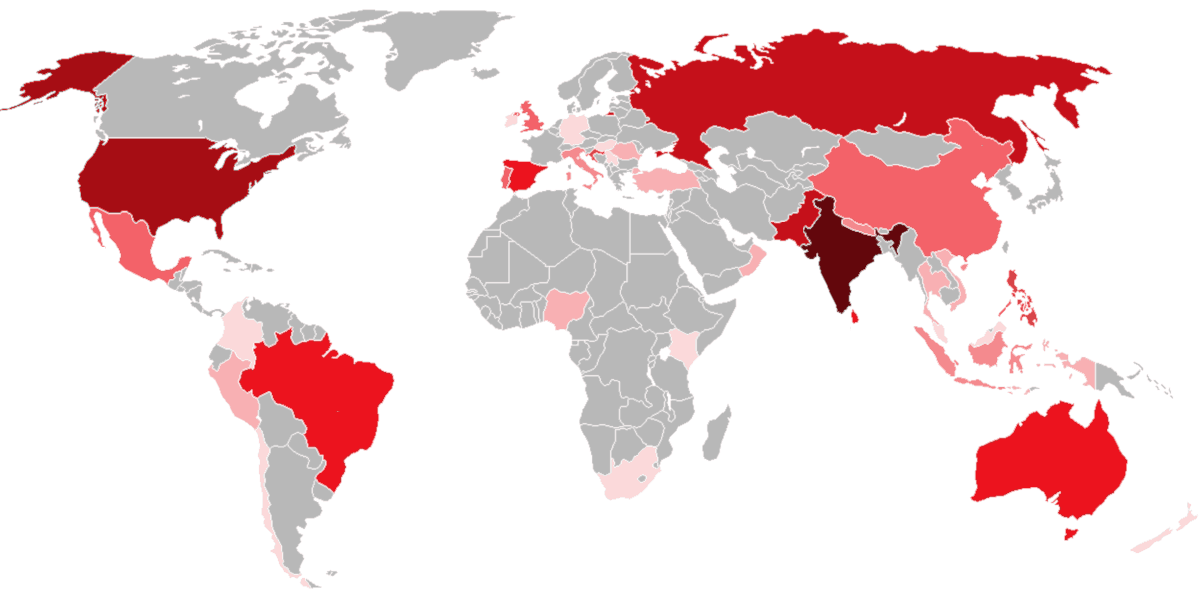 Selfies have taken over the world in recent years, for better or for worse. But people giving more importance to taking pictures instead of living in the moment pales in comparison to other consequences: death or injury.

Yes, a couple of hundred people are known to have been seriously injured—or to have died—while attempting to take a selfie.

Especially in one country. And you won’t believe some of the stories.

Selfie-related deaths and injuries by country

Here is the map with the numbers:

Reddit user anaconda300 put together this map of these incidents by country, based on available data from Wikipedia. Unfortunately, the data doesn’t distinguish between serious injury and death, in case you would have been interested in knowing the details.

That being said, whether the selfie attempt results in serious injury or death, to me, both are equally deserving of a Darwin Award anyway. Sure, some are unfortunate accidents, but still…

The mean age of victims is 23 years old, and 75% are men. And as you can see, India is by far #1 in the world. Even though it is the 2nd-most populated country, the number is still shocking. It was boosted by the single worst incident worldwide, when 48 were killed or injured by taking selfies too close to a burning bakery, despite repeated warnings.

That happens to be the only fire-related selfie incident, see below for the 7 types.

By the way, this is not data for a specific year, but rather all the deaths since selfies became a thing. Wikipedia defines being “selfie-related” as an incident “in which one or more subjects of a selfie were killed or injured, either before, during or after having taken a photo of themselves, with the accident at least in part attributed to the taking of the photo.”

The list is probably not even exhaustive, meaning there are likely to have been more deaths because of selfies, as it’s not like this type of death was an official statistic for authorities. Not to mention others might have happened without anyone ever knowing it was related to taking a selfie.

It goes without saying, but risking your life to take a selfie is pretty stupid. Don’t do it.

Enjoy the moment, appreciate the view, and when you do snap a picture, please do it safely.

How do selfie-related deaths or injuries happen?

There were 7 types of incidents:

I expected many of them to be falls, since a recent one in the Grand Canyon was highly mediatized here in North America.

But there were a lot of drownings, many of which are actually falls… into water. But some drowned after standing up in a small boat to take a selfie, causing the boat to capsize. I actually had to warn a dangerous tourist on my boat safari in Chobe National Park this summer, that will be a story for my article about that otherwise very fun Botswana activity.

In the transport category, there are many highlights, or rather lowlights: A passenger elbowed a small plane’s pilot in the head during a selfie, causing a crash. In a sightseeing helicopter with no doors, a passenger wanted to take a picture of her feet dangling in the air, but her harness got caught in a switch and the helicopter crashed. A passenger fell from a moving train and died while taking a selfie, but then 4 of his friends jumped to help him and got hit by another train. Other were just hit by a train when talking a selfie on the track.

And trains are a great bridge from the transport category to the electrocution category: many many people got electrocuted by a train during selfies, in various ways.

The animal category is pretty straightforward: many people died trying to take selfies with wild animals. A majority were elephants, but there was also a rattlesnake, a bison, a bull, a bear, a jaguar, and even a walrus.

Firearm incidents are next. There were only 11 of these, and less than half were in the US in case you thought that’s the only place gun selfies are a thing. All incidents are identical: the victims were talking selfies with guns to their heads and shot themselves by accident.

Finally, in the “other” category, there are no guns. But there’s an instance where 2 Russians pulled the pin from a live grenade for a selfie. Both died, but the phone survived and the picture was there as eternal evidence of that great idea.

Your odds of dying while traveling are infinitely lower than while you are just driving home. But of all the extremely improbable ways of dying abroad, one that can be very easily avoided is the selfie-related death. Take your eyes off your phone for a second to make sure whatever you’re doing is safe. Oh, and don’t play with grenades.

Are you surprised by this data? Tell us in the comments!