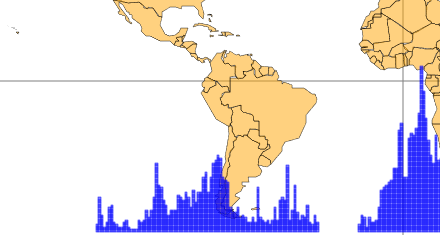 Our planet’s inhabitants are far from being evenly spread out and it’s interesting to look at this phenomenon from a different angle: how much people live on each longitude and each latitude. In other words, how many people live in each “slice” of the planet, in both directions (north-south and east-west).

Most travelers know the basics of which parts of the globe are densely populated and which parts are not, but here’s how that split looks like when looking at each slice of the globe.

In other words, on a 2D world map, the latitude is horizontal and the longitude is vertical. Here’s a very basic graphic that shows it clearly.

Let’s start with the longitude.

First, I’ll explain the visual. The higher the blue line at the bottom of the graph, the more people live in that vertical slice.

For example, since most of you can easily spot New Zealand (the two islands in the bottom right), you can see the easternmost blue line is pretty tiny. That’s because if you draw a vertical line at that precise spot where that last blue line is, from the South Pole all the way up to the North Pole, not many people live there. There’s basically just New Zealand, an empty part of Far Eastern Russia, and plenty of water in between.

So looking at the entire map, even if there is a lot more landmass in slices across the Americas and Europe/Africa, there are so many people living in the densest parts of Asia that they are still the most populous longitudes in the world. India is fascinating, having by far the most populous longitudes even if there is nothing but ocean south of it, and almost no one living in the regions north of it.

Without surprise, the gigantic Pacific Ocean and a portion of the Atlantic Ocean are where the lines are nonexistent.

Now let’s look at the latitude.

We’re not as used to considering the world in that direction. Densely-populated Western European countries actually line up with parts of North America and Asia that are virtually empty, making it once again not very high in terms of total population.

With very few exceptions, the entire Southern Hemisphere is very low-density, while the densest slices are in the Southern half of the Northern Hemisphere: the ones that line up with India and China, unsurprisingly.

If you want to see another series of interesting maps about how the world’s population is spread out, check out our post about world population density maps.

These maps offer a way to visualize the planet’s density in a way that we’re not too used to. Unsurprisingly, they highlight the most populous parts of our world pretty clearly.

What do you think of these maps? Tell us in the comments below.

A Map With the Most Popular Attraction of Each US State