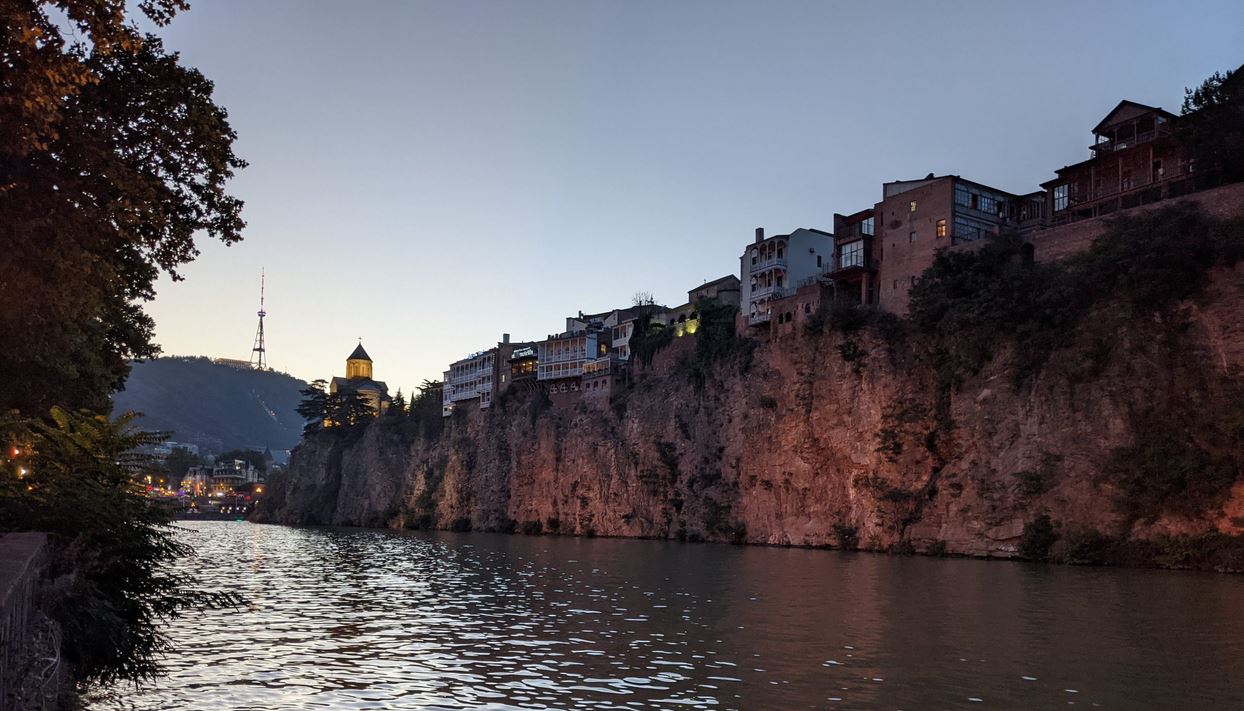 Georgia is a little-known, but truly amazing country. It is one of the places where I will have stayed the longest of all my many visited countries. I’m still here after more than a month, following a brief stint in Texas for a free vaccine, 2 months in Mexico, and 1 month in Turkey (again).

In April, I ended my forced break of over a year and returned to my digital nomad lifestyle. This is what allowed me to discover this super affordable and really interesting country.

Here is an introduction to this part of my trip and 24 photos of Georgia.

Overview on the trip logistics

If you’re interested in learning more about the logistics, let me know in the comments below.

I’ll give you at least a teaser.

Georgia is in the Caucasus region, a place full of history and one I’d been wanting to visit since I read about the country on a Wizz Air flight during our 2018 trip to Europe, when we flew to 12 countries in 14 days to show how awesome ultra low-cost carriers (ULCC) are (8 flights for $200 total).

So 3 years later I’m finally there. Like neighboring Turkey, it’s at the intersection of Europe and Asia (with more European and Russian influence than Turkey I would say).

First, I’ll show you the map of where Georgia is located, because the country is not well known and often confused with the southern state in the USA (which is also pretty, I liked Savannah along the coast and Atlanta, the state’s biggest city).

The country has only 4 million residents and is about the size of the province of New Brunswick. It’s also quite mountainous and the climate is quite varied for a small country, but in Tbilisi at least, it gets cold enough in winter that I will move to another country in October.

From Canada, we don’t often find low prices to this country on our cheap flight deals page, but we do find some to Europe in the $400s roundtrip. With a little flexibility, it’s sometimes cheaper to combine that with a ≈ $200 roundtrip flight from there to Georgia.

The country’s major cities, and those with commercial airports to land at, are:

Traveling during the pandemic is different, but normally it is easy to enter Georgia by land from Turkey, Armenia, or Azerbaijan (Russia requires a very expensive visa for Canadians) You can do this both by bus and by train.

Because the entry rules were less restrictive by air than by land (which sometimes happens… and sometimes it’s the opposite too), I took a more expensive last-minute flight to Tbilisi (flights from Istanbul are usually around $50) from Diyarbakir (DIY), via Ankara (ESB) and Istanbul-Gökçen (SAW), for $230.

Being fully vaccinated thanks to my free Johnson & Johnson single-dose in Dallas in early April, I didn’t need to do any pre-entry or arrival testing (and no quarantine of course).

Finally, Georgia has a fairly low cost of living, I’ll talk about that again if many ask. In short, my nice private 1-bedroom apartment cost me $788 for the whole month. But that’s because I’m always at the last minute, because I saw very nice ones for half the price for the following months.

But since I decided to stay here for 1 month literally the day before, there was not so much choice and the prices were much higher. Last-minute travel almost always costs more, contrary to popular belief.

The more prepared you are and the more planning you’ve done, the less expensive it will be to travel.

There is also a Marriott category 2 hotel in Tbilisi, which means that with the current Marriott Bonvoy American Express Card welcome bonus, with a travel buddy, you can get 10 nights free there (instead of 17 nights in Bali and some other countries).

Anyway, these low prices, combined with the fact that Georgia is a quite developed country and very open to digital nomads… that explains why there are many of us here and why the community is quite lively!

I visited Tbilisi and Batumi, so here are some pictures.

Batumi is on the Black Sea coast with beautiful mountains around.

Batumi is also known as the Las Vegas of Georgia, with its exotic casinos and hotels.

That means there is some very touristy stuff…

And imitations of famous landmarks, just like in Vegas.

There were a lot of Russian travelers and there was a lot of new hotel construction all over the city.

The Batumi skyline is not too shabby.

The Alphabetic Tower on the right has the 33 letters of the Georgian alphabet to celebrate how unique the language and their culture are (much like Albania).

The architecture is quite varied in Batumi.

Many areas have a very classic European look.

Batumi has the Ali and Nino Monument, two 8-meter high statues (a woman and a man) made of transparent steel that slowly move to cross each other and gradually become one, every 10 minutes.

The country’s capital is where I spent most of my time. and where I still am now.

A river divides the center of the city.

The old town is impressive.

You can see it from above thanks to the cable car that allows you to go up to the “Mother of Georgia” statue.

The city is really modern in places too though.

Even near the old town, there is the Bridge of Peace and a nice park next to it.

Vake is one of the more modern neighborhoods.

The very nice Moxy Tbilisi Hotel, the category 2 Marriott hotel I mentioned, is not too far away, right by the river.

I spent a night there just so I could tell you it’s beautiful, but when I travel solo in cheap countries, I stick to category 1 hotels only to make good use of my valuable Marriott points.

Georgia is known for its churches and monasteries.

I went to visit the Holy Trinity Cathedral of Tbilisi.

Georgia is also known for its wine (it’s where they invented wine in fact).

On the food side, the adjarian khachapuri is a Georgian classic.

Another local dish is khinkalis.

Finally, here’s just what one of my full private apartments looked like for $27 a night.

It was very nice.

Georgia is a fascinating and affordable country, definitely a recommended destination if you want somewhere that offers a little more of a culture shock than the rest of Europe.

What would you like to know about Georgia? Tell us in the comments below.

10 Incredible Activities To Do In South Africa

Memories from my most recent trip to Kyiv in November

7 reasons why you should visit Poland