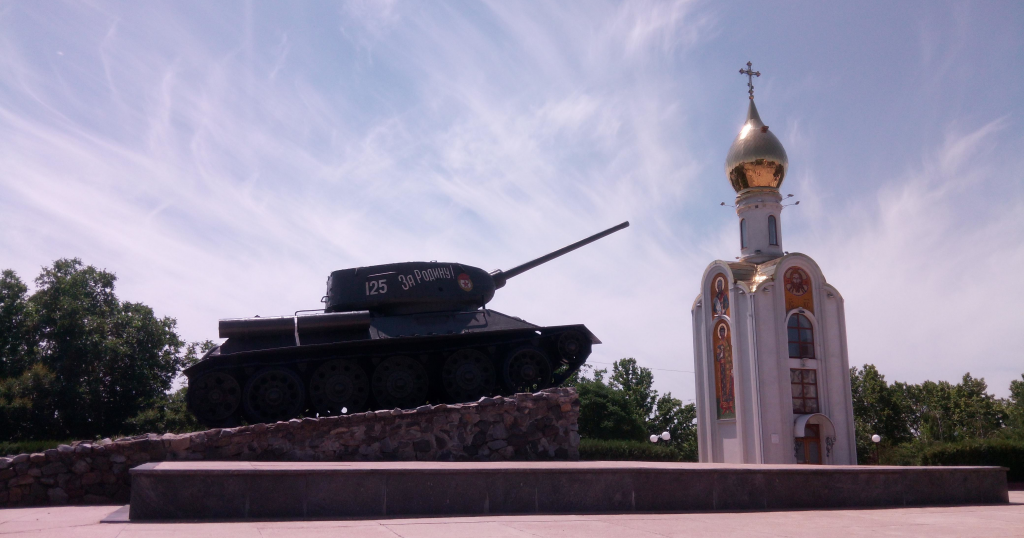 We love places that are off the beaten path, so visiting an unrecognized country is always very special. Transnistria is one of those I got to explore and it was said to be like stepping into a Russian time capsule from what we’d heard.

For some background on this “country that doesn’t exist,” its “frozen conflict” with Moldova, and its pro-Russian history, read part 1 of this post.

Here is what it was like to travel to Transnistria (although it’s literally one of the only countries in Europe those who are more fearful should not travel to these days with the Russian threat).

Tiraspol is Transnistria’s capital and main city. It has a population of 130,000, so it’s not huge. About the same as Kingston, Ontario.

That’s where we stayed.

As for the vibe, it was indeed special because the country has been almost cut off from the rest of the world for 30 years. Trade and relations in general are definitely more complex when there’s a delicate situation like a country that doesn’t actually exist.

As far as feeling like I was in the 90s as many were saying, I have to say it was a bit disappointing. I would have liked to go back in time, that’s not something you can do often.

But I didn’t find it was really the case. It was exotic for sure, but not really frozen in time or anything like that.

It’s true that there weren’t really any modern buildings. I guess it’s hard to attract investments in such an uncertain political environment.

Maybe that’s what people were referring to.

Or maybe we would have had to get out of the city.

(But then again, would Transnistria’s rural areas really have been that different from the obviously less “modern” rural areas I saw during my roadtrip in Moldova, right beside?)

I’ve never been to Russia, and neither has Kevin (we try to boycott countries who want us to pay just to enter, AKA countries with visa requirements), so we can’t really compare, but I think Tiraspol probably looks more like a small Russian town would today (in the present — unfortunately not really in the past).

But that in and of itself was a real change of scenery. Especially with the (very) huge language barrier.

A proof that it’s similar to Russia: the grocery stores had much larger vodka shelves than water shelves! 😉

And there were a lot of old Ladas, too!

It’s pretty rare that we can’t communicate by speaking English anywhere in the world.

I can tell you that Transnistria is one of the places where it was the hardest to talk to anyone, even today after visiting 66 countries (and a few more “fake” countries, of course).

Even at our hotel, employees spoke only Russian, Ukrainian, Moldavan, or Romanian. Thank you, Google Translate!

Our $3 Moldovan SIM card worked very well in Transnistria to access the app, despite the borders being even more imaginary than the other normal imaginary borders. As we’ve been telling you, never use your Canadian provider’s roaming plan scam, of course! Such a common mistake; we’ll have a detailed post about that this month.

Otherwise, the Google Translate app allows you to save languages in offline mode, just like you can do for Google Maps, so you don’t even need mobile data.

But it wasn’t just at the hotel: very, very few people spoke English during our brief stay in Transnistria, and with everything written in Cyrillic script, it seemed like it was even more intimidating (we now each have an awesome Google Pixel phone that translates signs and text by simply pointing the camera at them; we highly recommend it for that and for the amazing pictures; not the ones in this post).

Even in other countries with indecipherable alphabets, there’s almost always an English version on signs at least.

It adds to the feeling of exoticism, for sure!

In short, despite the particular political situation, life is quite normal in Transnistria, as it is almost everywhere in the world (as you know if you’ve ever been to a country that’s not too touristy — as all travelers should obviously do more often)!

People live their lives. For example, they go to the market.

The political situation obviously affects the economic situation, which means everything is extremely affordable.

It’s among the poorest places in Europe. And even though most of the city was pretty well maintained, it’s not the case everywhere (but I’ve been to Memphis in May, in the richest country in the world, and I can say the same about that place…).

It’s not so good for them obviously. But objectively, it’s very beneficial in terms of the costs to visit Transnistria for us as travelers.

This delicious chicken meal was a mere $5.13 total.

Breakfast at the hotel was included, prepared à la carte — but not in English though, obviously.

The food was very Soviet, no surprise.

Speaking of food and drinks, one of Tiraspol’s attractions (of course, there aren’t that many) is KVINT, a distillery and vineyard right in the center of town.

It was established back in 1897 and is known for its cognac, which has won international awards.

KVINT is apparently considered a national treasure, so much so that the factory is on the 5-rupee note! I guess it helps that it’s owned by a conglomerate that has a huge stake in the Transnistrian economy and is present in just about every sector.

Funnily enough, the bottles say “Made in Moldova” because it’s required internationally to have the name of a “real” country as the origin of an alcoholic beverage.

Speaking of currency and “unreal” countries, Transnistrian rupees are a pretty special currency for an unrecognized country: you can only get them once you’re in Transnistria and you have to exchange them before you leave, if you have any left.

Because there’s not a single exchange office that will touch a currency that doesn’t actually exist, obviously.

I don’t know if it’s the effect of the KVINT alcohol, which was available everywhere, or just a Russian stereotype that might turn out to be true… but people were having a lot of fun in the city.

No one is going to mistake Tiraspol for Budapest, but the Transnistrians were partying on a party boat in broad daylight! Or maybe they were actually Moldovans, who knows?

The Dniester River is very important in Transnistria, as it forms the country’s border on the entire Moldovan side.

It runs very close to the center of Tiraspol.

As it’s often the case with cities that used to be in the Soviet Union, you’ll find large, majestic parks in the city center.

Other monuments and sites

The style of all the architecture is very Soviet, as it actually is in pretty much this whole corner of the world (just like in Uzbekistan and Kyrgyzstan where I went in May 2021).

Like any ex-Soviet destination, it has war monuments. The one in the cover image of this post is the most important.

This is just in front of the parliament which was the cover image of the 1st part of the post.

This architectural style is pretty common in churches.

It’s always beautiful and interesting to see this for an architecture lover.

Finally, we also saw this, which is pretty special. I really couldn’t tell you what it was, though!

Logistics of our trip to Transnistria

Apart from certain specificities about leaving the country and the always too alarmist governmental travel advisory mentioned in part 1, the unrecognized currency, and the language barrier, the rest of any trip to Transnistria is pretty normal and simple.

The only thing I haven’t mentioned yet relates to accommodations.

We stayed at the Sofia Hotel right in the heart of Tiraspol.

It didn’t really look like a hotel and it doesn’t seem to exist anymore, perhaps another casualty of the pandemic the governmental response to the pandemic.

We recommend Booking.com to do your research (below), because it has lots of filters, but then always book on Hotels.com if the price is similar to get 10% back in rewards.

We’ll soon have more content to help you save on lodging everywhere!

Want to receive some travel inspiration?

Even if it wasn’t really a trip back in time to 1990s Russia, Transnistria is a really interesting unrecognized country to visit, with relics from its Soviet past and affordable prices for budget-conscious travelers looking for a change of scenery.

What would you like to know about traveling to Transnistria? Tell us in the comments below.

14 Stops On Our Epic Roadtrip Itinerary In Albania

27 photos of our trip to Central America in January

5 reasons why I loved my visit to Bishkek, the capital of Kyrgyzstan