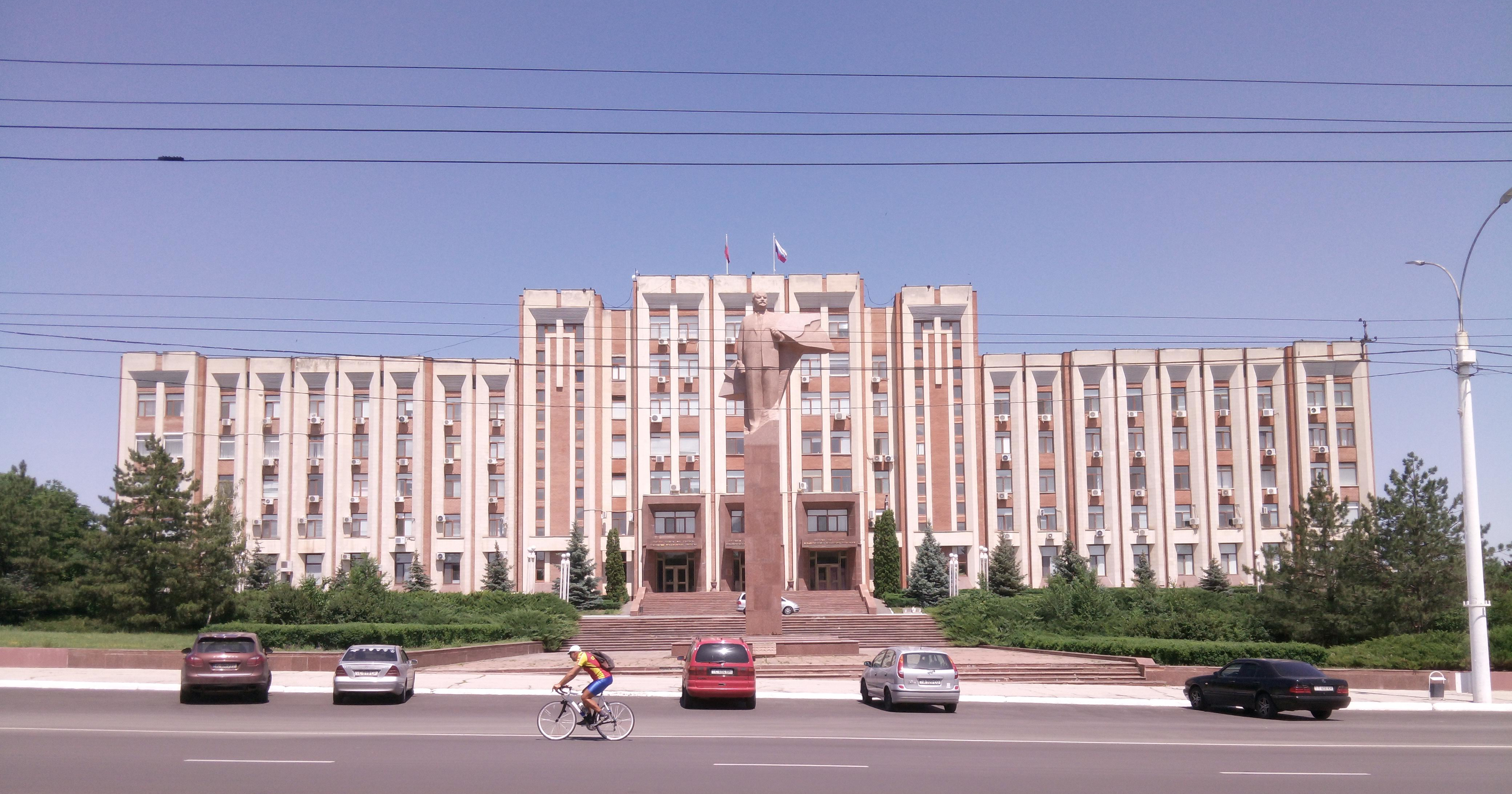 Transnistria is a European territory that’s officially part of Moldova, but is fully autonomous and has been supported by Russia since it has been in the midst of a frozen conflict since 1992! Yes, Transnistria has been caught in some sort of political limbo for 30 years.

It’s not technically a real country, but in practice it is! They have their own customs, their own currency, their own army, etc. That’s why it’s often called a country that doesn’t exist.

We were told that going to Transnistria was like traveling back in time: that it was as close to feeling like Russia in the 1990s as we could find! But…

Here’s part 1 of what it was like to travel in Transnistria.

This is more of an introduction to this unique place and how to get there: come back next Friday for 25+ additional photos and all the details of our travel experience in this “country” (or subscribe to our free newsletter to receive everything).

Context of our trip to Transnistria

Many Flytrippers readers ask us to talk more about our own travels, since we travel so much.

(I’m currently on my 6th trip of the year and have 8 or 9 planned for the rest of 2022, to give you an idea. It’s honestly easy to travel more when you know all the pro tips, and we’ll be compiling them for you and sharing them in an ultimate guide soon).

So we’ll have more content about our own trips, including more structured reports for each one eventually (I published part of the 1st one on my trip to Central Asia in 2021 very recently).

As for our trip to Transnistria and Moldova, it was in June 2019, after Kevin and I had been invited to represent Québec at a conference about the digital industry in France.

Moldova is located between Romania and Ukraine, in Eastern Europe.

It’s downright the least visited country in Europe. It was great though and really affordable (but that’s for a separate post too: I’ll just talk about Transnistria in this one).

Transnistria, officially the Pridnestrovian Moldavian Republic, is basically the part of Moldova that’s east of the Dniester River (hence the name of the country), all the way to the Ukrainian border.

(By the way, it’s not recommended to use the name “Transnistria” there, it’s a sensitive topic; use “Pridnestrovie” instead if you ever go there!)

Transnistria is a bit smaller than Prince Edward Island and has 350,000 inhabitants (a bit more than the Saskatoon metropolitan area, for example), almost half of which are in the capital, Tiraspol.

When we went in 2019, it was striking that the 1st thing you see when you get there is a Russian flag hanging on the bridge over the Dniester River (the border)… and not a Transnistrian flag.

When the USSR was dissolved at the end of 1991, the various republics that were part of it became independent, including Moldova.

Transnistria took the opportunity to declare its independence from Moldova in 1992, since its population is mostly of Russian origin (while in the rest of Moldova, it’s mostly of Romanian origin).

There was a short war that lasted about 5 months between Transnistrian separatists (supported by Russia) and the Moldovan army, which ended without any real resolution: Transnistria is autonomous, but with a vague and unofficial status.

(The Lenin statue is a reminder of the Soviet years, too!)

And the Russian flag is also on many other buildings in Tiraspol.

By the way, speaking of flags, this is one of the few places in the world where you can see an official display of flags from other unrecognized countries, which are often former Soviet territories.

(These “countries” tend to form relationships and recognize their independence among themselves, in an attempt to gain credibility).

In short, they seemed to be very pro-Russian in Transnistria.

Transnistria and the current Russian aggression

The attachment many citizens feel toward Russia is what makes Transnistria a potential “target” for Russia in the current conflict.

I say “target” because the people there probably aren’t against the idea of joining Russia at all, if we look at history: they declared independence by explicitly saying they wanted to be part of Russia (the politicians at least).

So it’s a bit different from Ukraine… But let’s not go into political details.

Some speculate that Putin would like to take part of the Ukrainian territory in order to get to Transnistria and extend his empire to the Moldovan border without interruption, which greatly worries the Moldovans, as you can imagine.

This country may be one to avoid this year for your summer revenge travel, unlike almost all European countries.

By the way, even when we went there in 2019, the Canadian government had issued an advisory to avoid all non-essential travel to Transnistria. You know, in case all of a sudden, after 30 years, the day you go is THE day the conflict “unfreezes” and everyone dies instantly… 🙄 You can’t take zero risks in life! It’s amazing how so many people struggle to contextualize risks…

But mostly — we clearly saw this during the pandemic — there’s hardly anyone who understands what a government travel advisory is, so I’ll do a separate post on that so we don’t get into that here.

How to get to Transnistria

Transnistria doesn’t have a commercial airport, so you have to go by land through Moldova or Ukraine (by car, bus, or train).

From Chișinău, the Moldovan capital, we took a typical “marshrutka,” a small shared van like there are in quite a few countries to get around cheaply: it cost $2.50 for a trip that lasted about 1 hour 15 minutes. We took one that was a little more luxurious for the return trip, which resembled a real bus (but a mini-bus), for $1 more.

As I said, there is a border post as if it was a real country.

We were the only Westerners in the “marshrutka,” but we had no problems at all at the customs; it was as simple as entering anywhere else. But you have to keep the little piece of paper they give you at the border and give it back when you leave.

It’s important to always check if there are special rules like that one when you go to an unrecognized country. It’s obviously a very particular border situation.

Speaking of passport stamps, Transnistria doesn’t stamp passports unfortunately, for those who like to collect those like we do. By the way, if you’re really serious about visiting all the countries in the world like us, we’ll have a special invite soon, just let us know if you’re interested.

Last side note: I recently learned that some airlines downright refuse boarding to passengers who have “fake” stamps (like the classic Machu Picchu one that I had in my previous passport). So there’s always more to learn, even when you’re a travel pro!

Why the refusal? A “fake” stamp desecrates the passports which must in theory be used only for real stamps and official reasons. So, I won’t do that anymore.

And if Transnistria had a stamp, it would definitely have been 100% in Cyrillic script, like everything else in the country…

Coming up next Friday

I’ll tell you about our impression of the vibe, the communication (or lack of, actually), the logistics and what there is to see in Transnistria with 25+ photos.

Want to get some travel inspiration?

Despite being a small territory with an unclear status between the rest of Moldova and Ukraine, Transnistria is a really interesting place deeply rooted in its Soviet past.

What would you like to know about traveling to Transnistria? Tell us in the comments below.

Logistics of my current trip to Vancouver

Memories from my most recent trip to Kyiv in November