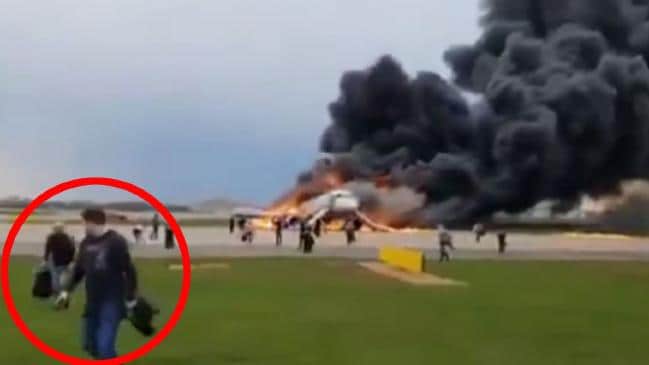 Earlier this month, passengers did not follow a very basic (and important) safety rule… once again. And this time, 41 people died. Here’s what you need to keep in mind to avoid making this mistake and to make sure you do not put other people’s lives in danger.

First, let’s be clear: the chances of an emergency situation happening to you on a plane are extremely low. You are exponentially more likely to be involved in a fatal car accident than a fatal plane crash. So you can take advantage of the great prices on our cheap flight deals page without worrying.

In the United States alone, there are over 80,000 flights a day. And on average, 80,000 a day go smoothly and without any incident. But if something does happen… it’s important to follow the rules, for your safety. But especially for the safety of the other passengers.

After another similar (albeit more minor) incident, I had written an article a year ago, in May 2018, about this same mistake precisely, saying that it was very serious and that even if that time it had not led to any casualties… it could easily be deadly.

For once I was hoping to be wrong, but that is apparently exactly what happened with the Aeroflot tragedy in Russia on May 5th.

So here is a very important safety rule that is clearly worth repeating.

A Russian aircraft caught fire quickly after landing in Moscow and had to proceed to an emergency evacuation once it came to a stop. 37 people survived, but unfortunately 41 passengers died.

Here is a video of the scene, it is quite shocking and it’s not for the faint of heart since it also includes parts filmed inside.

In short, as the aircraft burned violently, several passengers took the time to bring their bags and personal items.

There are no excuses, it’s really simple: during an evacuation, you don’t take anything with you. Absolutely nothing. You get out, and quickly. Hence the term “emergency evacuation”.

Several media reports indicate that passengers trying to take their carry-on bags and their luggage are in fact responsible for the deaths of the other 41 passengers. By slowing down the evacuation process.

It is probably too early to draw those conclusions officially, but we can all agree that it is not too hard to believe… every second counts in an emergency situation. Again: this is why the term “emergency” is used.

Especially in this case… if only 47% of the people onboard made it out of the fire alive, it’s obvious that every precious second lost by idiots (sorry, but there’s no other word) who were doing anything other than EXITING the plane as quickly as possible… is a second that could have saved someone’s life.

Don’t ever do that.

Imagine being in the back of the plane and literally burning alive because people want their bags. It’s unpleasant to read; imagine living it. I hope it shocks you enough to make you remember the rule if it ever happens to you.

So today we’re using our platform for something a bit different than helping people realize that they can afford to travel more often… and we’re doing our part to educate people and make sure everyone who flies knows what to do if there’s an emergency situation. Even though we obviously wish that nothing like this ever happens to you (and the odds are that it will never happen to you).

It’s that obviously, taking your bags slows down the evacuation process on board. But above all, it slows down going down the emergency slide too… so, even those who think they’re so smart by saying “no, it doesn’t slow anything down, I have my bag right here, I’m taking it with me”: no, it’s still stupid to take it. And dangerous.

If the slides are deployed to evacuate, it means it must be done quickly. And taking anything with you will slow the process down, that’s undeniable. Even a fraction of a second is too much.

Evacuation procedures are designed to ensure that aircraft are evacuated in 90 seconds. Any way you look at it, with over a hundred passengers on a plane usually, that doesn’t leave much time already, even when everyone is cooperating (less than a second per passenger),

However, it is feasible if everyone follows the instructions and leaves their bags and personal items, flight attendants are trained for this. But it’s really not the time to waste precious seconds with your bags, they are just objects.

Whatever’s important in your luggage is replaceable. A human life lost because you’re slowing down the process… that isn’t. Moreover, several American states have laws that could send you to prison (“endangering lives”) if you take luggage with you when you evacuate and someone is injured (and it is well deserved) and I hope that this is the case in Russia too.

You probably wouldn’t want people to die just so you could have your bag (at least I hope so). So you must leave everything on the plane and evacuate quickly, as specified in the safety instructions at the beginning of every single flight. It’s a very simple rule!

I am the first to admit I completely ignore the safety instruction demonstrations at the start of the flight. But that’s because I took over 70 flights last year alone… and because I know the rules well as an aviation enthusiast.

If in your case you are less familiar with the rules, you should listen closely.

Statistically, the chances of a situation where you have to evacuate urgently happening twice in your life are almost nil. So if this happens to you once, don’t miss your chance and make sure you do it the right way!

Especially since it’s quite simple! Yes, for many, an emergency situation is stressful, but it’s no excuse. Leave everything; get out; fast.

I can imagine that those who slowed down the evacuation process on that flight feel pretty bad right now. Our thoughts are with the families of the 41 victims of this tragedy, which could have turned out so much better if it wasn’t for the idiocy of some passengers.

It is a very basic safety rule to keep in mind when you are flying. Dozens of people are probably dead because some passengers wanted to bring their bags while the plane was burning. Don’t make the same mistake if you ever experience an emergency situation.

What do you think about this situation? Did you know about this rule? Tell us in the comments.

Cover image: passengers with their bags in front of the burning plane (photo credit: News.com.au)

AROUND THE WORLD for $1,242 (France, Italy, Greece, Singapore, Thailand, China)