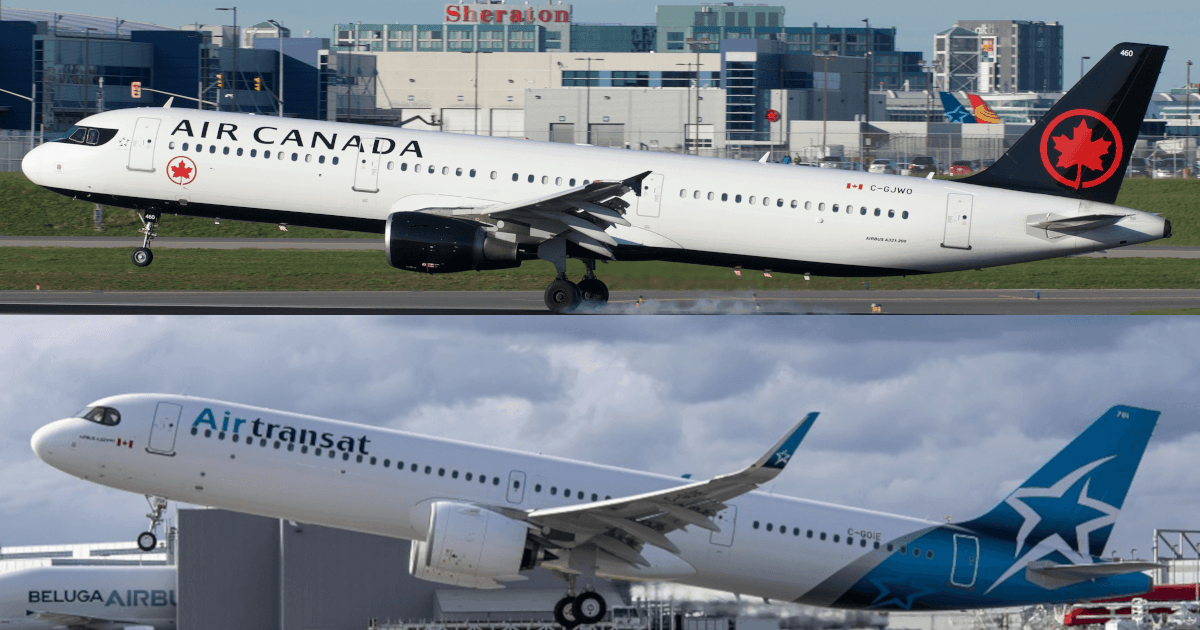 It’s been a busy week in Canadian aviation. Here’s the latest major announcement: Air Canada and Air Transat have entered into an agreement on a 30-day window for exclusive negotiations for the country’s largest airline to purchase the smaller leisure airline.

As we mentioned Tuesday in our article about WestJet being purchased by a private equity firm, Montreal-based Air Transat had also been exploring potential suitors for a couple of weeks.

Yesterday it was announced that a preliminary deal has been reached with our flag-carrier Air Canada. The country’s largest airline has agreed to purchase Transat for $520 million, with the details to be worked out over the next month.

For those of you less familiar with Transat, they are a leisure airline that operates a fleet of 40 aircraft mostly to sun destinations in the winter and to Europe in the summer. But it is a vertically-integrated company: along with the airline, they also have a travel agency division and are even currently building their own hotels for their package vacation customers.

What this means for travelers

In a country like ours, with some of the highest airfares in the developed world already as it is, eliminating 1 of only 4 major airlines means less competition… and therefore higher prices.

Here is an interesting graphic shared by CBC News to show capacity for Europe: 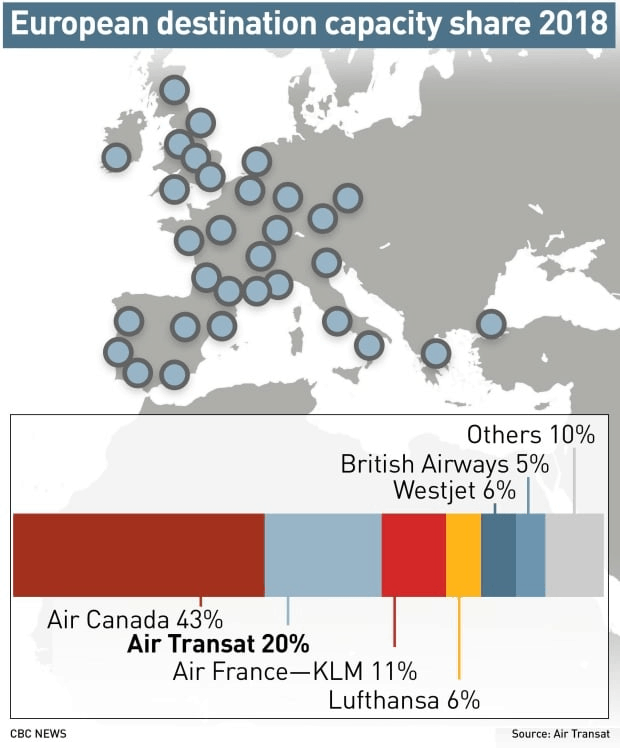 As you can see, Air Canada and Air Transat are the two leading airlines, with 43% and 20% of transatlantic capacity. The two combined airlines therefore have almost two-thirds of the capacity to Europe, one of the most important aviation markets for Canadians.

Even more worrisome is that the closest competitor has only 11% of capacity (compared to the 63%)… and it is a foreign carrier too.

It is now extremely common to see flights to Europe in the US$200s roundtrip from the US (both the East Coast and the West Coast), including on full-service carriers. And while prices have also gone down from Canadian gateways, it is nowhere near as cheap as in the US because they’re is less competition and volume (and higher taxes of course).

So most Canadians still pay $1,000 or so to go to Europe, and nothing about this announcement is encouraging on that front. We fear that instead of prices decreasing like what we’ve seen almost everywhere around the world, Canadians might see the opposite because of this merger, combined with WOW air ceasing operations recently.

That airline allowed me to fly 3 times to Europe for $1,000 TOTAL (3 roundtrips for $247, $300 and $330 de Montréal) and helped keep prices down on other airlines, and Transat was often the cheapest airline since WOW’s demise. And if you’ve looked up literally any flight price ever… you know that Air Canada is rarely the cheapest option.

At least WestJet has plans to become a much bigger player on the transatlantic market with their new long-haul aircraft, but whether or not that is enough to offset the lessened competition remains to be seen.

For sun destinations, the numbers are a bit better: 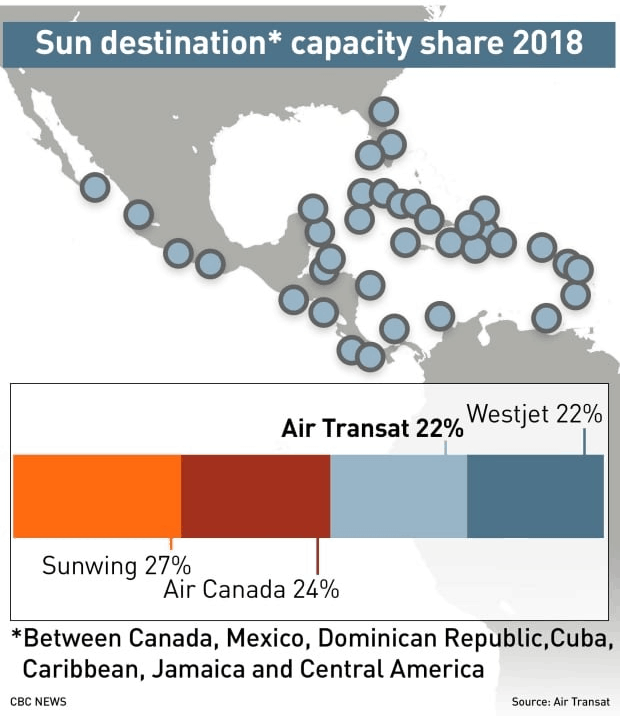 But still: having 4 strong players is obviously much better for competition (and therefore for travelers) than having just 3.

And contrary to the Canada-Europe market, where many European airlines also compete to keep the Canadian carriers honest on prices, the same cannot be said for sun destinations. There will now be only 3 main players, at least for those who only travel with direct flights and like the all-inclusive type of holiday.

Finally, this is extremely (and entirely) subjective but many have strong opinions on whether Air Transat offers better service than Air Canada… so the takeover can either be seen as very bad thing or a very good thing depending on your opinion on the matter. I can’t comment on that since Air Transat is not one of the 40+ airlines I’ve tried, but my general rule is that I really don’t care about anything other than the price (and that’s how I get to travel 10+ times a year)!

As both CEOs alluded to in the press release, this is good news for both companies, their shareholders and their employees. Those things are all likely true. But it usually can’t be good for all these stakeholders and also be good for customers.

It’s true that the takeover could lead to economies of scale and therefore lower costs, but to see that as positive implies thinking that Air Canada would change its business model entirely: their current positioning absolutely does not involve differentiating through price or being cheaper… and with a major competitor gone, why would they change that when things have been going so well with the current approach?

Also, those who have strong nationalistic pride will be happy that Air Transat will stay in the hands of a Canadian company, even though like most protectionist policies, it is not necessarily good for consumers economically-speaking. In fact, that’s precisely one of the reasons airfares have always been high in Canada: by law foreign investors cannot own more than 49% of an airline (and up until recently it was only 25%), limiting Canadian airlines’ access to financing and competitiveness.

Finally, the only way the transaction could be good for consumers is if you believe that Air Transat could not have survived on its own (which is far from a sure thing, since they’ve been in business for decades and seem to be well-liked by their customers): an argument could be made that it’s better to have them being taken over by Air Canada than eventually ceasing operations entirely…

But hopefully, Ultra Low-Cost Carriers (ULCC) that are now in Canada will take advantage of this opportunity and this opening to gain market share and cater to the price-conscious travelers, at least for the sun destinations.

And WestJet expanding internationally could cancel out the effect of consolidation for the Europe market as mentioned. And we’ll keep our fingers crossed that European ULCCs Norwegian and LEVEL decide to expand their routes in Canada to lower prices.

Obviously, many more details will need to be worked out.

The biggest hurdle will likely be Canada’s Competition Bureau, who will have to decide whether the purchase is in the interest of consumers. Based on comments by the Quebec government and the federal Minister of Transport since the announcement, signs seem to point towards an approval, but time will tell.

If the deal goes through, it is extremely unlikely that Air Canada will be interested in the hotel construction projects Air Transat had launched. Even the tour operator side of the business will probably be divested, either by strategic choice or by request of the competition bureau.

And will the Transat brand survive? Or will it be rolled into the Air Canada rouge brand that was launched a few years back to compete with Transat and Sunwing? That seems more likely.

Air Canada purchasing Air Transat is worrisome, at least for consumers, since less competition is rarely a good thing.

What do you think about Air Canada taking over Air Transat? Let us know in the comments!

Get $25 Off Any Hotel in the World