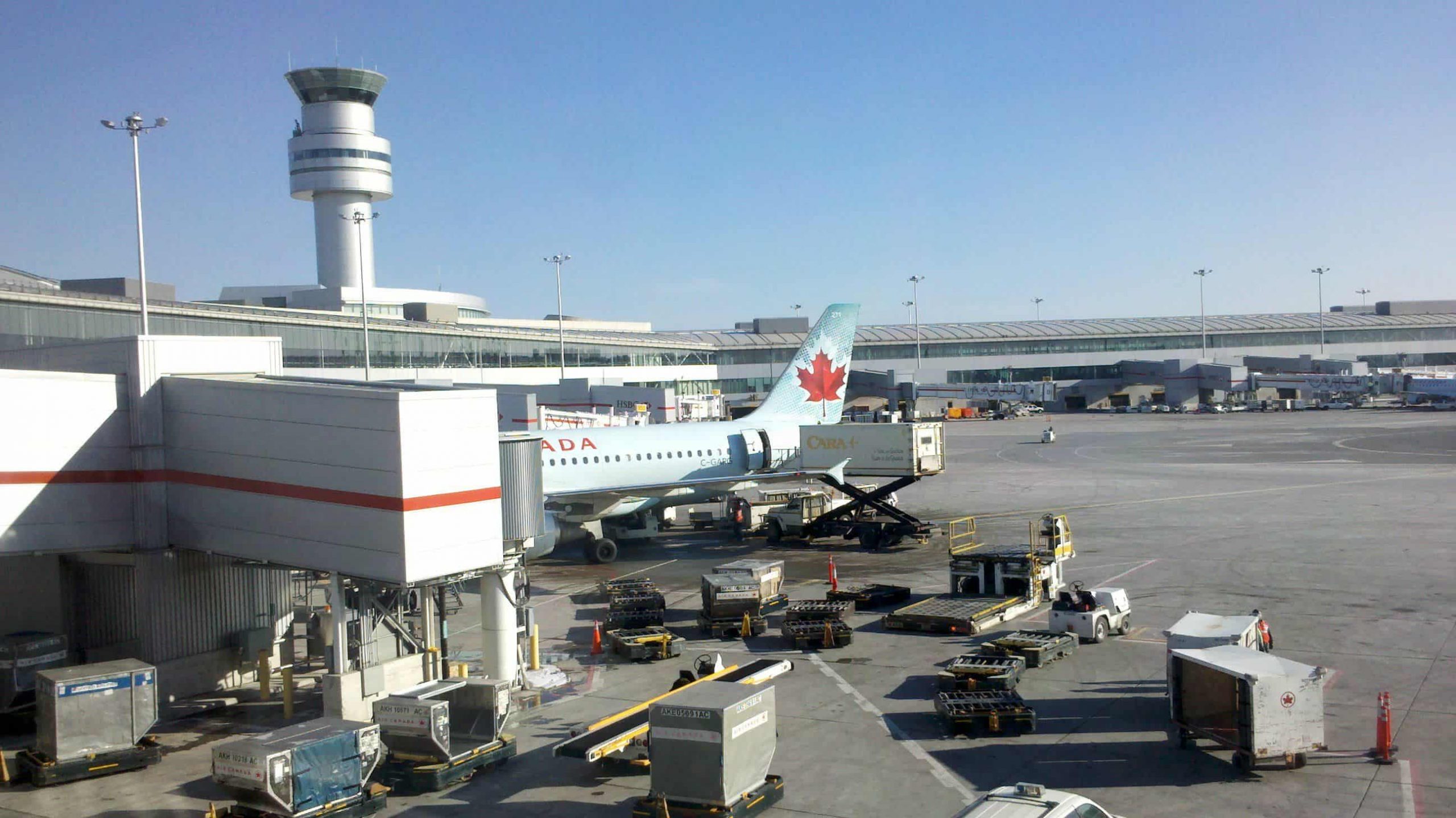 There is a myriad of other reasons why air travel is so expensive in Canada, but there’s no denying that airport fees play a major role.

Here’s what you need to know about the fees list, a few real-life examples, and important implications for those who enjoy getting free travel.

What Are Airport Fees?

Airport fees or airport taxes are officially called “Airport Improvement Fees” (or “AIFs”) and are built-in to the price of each ticket.

So to be clear, this portion of the price does not go to the airlines; they have to pay it back to the airports (although CBC News previously reported that the airlines do keep 4%–7% as a processing fee).

This is not the only tax you pay on a plane ticket, obviously, but it is sometimes the main one. As you’ll see below, you also pay a fee for security and the sales tax, which means before the airline even makes a penny, your flight already costs more than it could cost in total in many other countries.

Airport fees are the reason that we Canadians can’t have $14 flights like the very common deals we spot in the US (deals that those of you who live close enough to the US border and are willing to drive a few hours for an insanely cheap flight can take advantage of—sign up to our free newsletter to get our upcoming article about that tip) and in Europe (like the 5€ sale we told you about last week).

For reference, US airports can charge a maximum of $4.50 USD per ticket while Canada’s 3rd and 4th busiest airports (Montreal and Calgary) both charge $30 CAD, or 400% more than in the US if you prefer. (FYI—in the US, they’re called Passenger Facility Charges, I’ll tell you more below.)

Think about that: $30 just as the airport tax. In the past, I have (and you probably have, as well, if you’ve traveled in Europe and prioritized paying less) bought a dozen flights that have cost me less than $30 in total thanks to ultra low-cost carriers (ULCCs). But that’s just the cost of the airport fee in Canada.

The airport tax amounts vary widely, but most major commercial airports in Canada are within the $20 to $35 per flight range. The fee is charged based on the departure airport, so for a roundtrip it is obviously charged each way.

Here’s the list of AIFs (sortable by province and searchable):

Among The Highest Airport Taxes In The World

As I mentioned, I’ve personally bought $9 tickets in Europe, $14 tickets in the US, $25 tickets in Southeast Asia, etc. And even in Peru, China and South Africa, I saw $30 tickets when planning my trips. In other countries like Mexico, Colombia, Argentina, India, Jordan, Israel, there are also frequent fares under $50 on ultra low-cost carriers (ULCCs).

Obviously, with the airport fees above alone, we won’t be able to reach that amazing level of low prices here in Canada, even though we now finally have 2 ULCCs. We were among the last developed countries to get these, but better late than never.

We did see $8 flights here in Canada with these ULCCs. The departure airport was Abbotsford, Vancouver’s secondary airport that eliminated its airport tax entirely. The fare was, in fact, $0, and the airline only charged the mandatory taxes and fees—as ULCC Frontier Airlines often does in the US.

But that $8 flight was a one-off, and we haven’t seen anything close to that since. Our favorite “upcoming” ULCC, Jetlines, has even blamed these types of low fares for its inability to get off the ground after 6 years of trying, calling them “predatory pricing”. To be fair, they also blamed government taxes and fees at least, too.

They’re not alone, as more credible airlines have come out publicly against these: Calin Rovinescu, CEO of Air Canada, has said that airport fees and other restrictions hinder their ability to compete. And that’s coming from an airline that’s not trying to attract fliers who value low fares, so that’s saying something.

(by the way, many people were excited to see “flights under $300” from Air Canada yesterday.. which were one-way flights, literally for the same price as the roundtrip flights we spot for the same destinations on our deals page: that’s why we told you last week to beware of fake “sales”)

Speaking of Air Canada, for those who want the full breakdown of taxes, here is a recent example when I bought a $460 one-way flight from Bathurst, New Brunswick (ZBF) to Quebec City (YQB). Don’t worry, the event hosts who invited me paid for this—I haven’t changed, I’m still a budget-traveler.

I didn’t even want to get into how insane $460 is for a one-way flight under 500 kilometers, given that I have bought roundtrips to Singapore, China, South Africa, Sri Lanka, and Lebanon for about that same price (roundtrips!)… but I can’t help myself, so I have to add just one sidenote:

For those who think flight prices have anything to do with the distance flown, of course, they don’t.

So just for the fun of it:

Yes, a dollar per km vs. a cent per kilometer, almost 100 times more. But I digress.

Last thing, a fun fact: no, not all Canadian airport codes start with the letter “Y”, as Bathurst is the only commercial airport in Canada where it is not the case (the “Z” still makes no sense, so kudos on sticking to the theme).

So here’s the fine print from that $460 one-way ZBF–YQB flight: 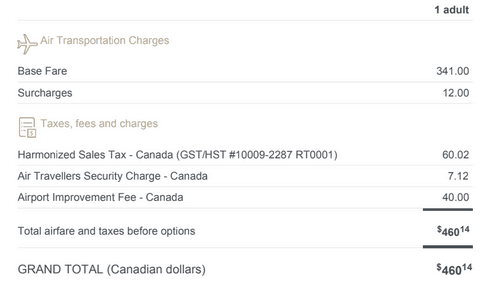 The breakdown of the price is:

Now, that means over $100 of this one-way ticket was taxes. Because the fare was so high, that is a high amount but also a low percentage (“only” 23% tax in total).

So let’s look at a cheaper domestic flight I’ve bought to see how high the tax rate can be.

This was a one-way from Toronto to Quebec City for $99.76 last year.

Here is the fine print: 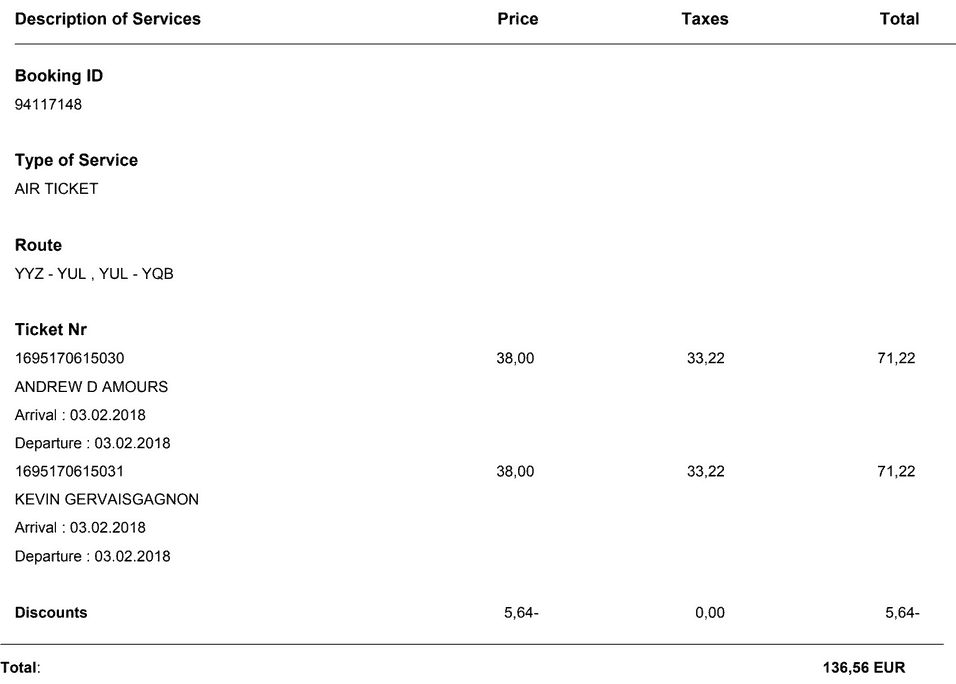 This was for 2 passengers and in Euros, so here’s the conversion in Canadian dollars and for one ticket:

To be fair, in the US, I’ve paid a higher tax rate, as I said earlier… 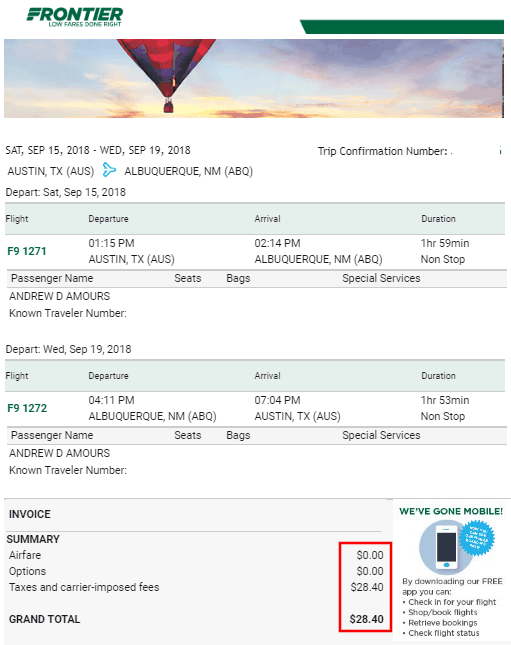 Yet somehow that one is easier to swallow, don’t you agree? Long live $14 flights and long live ULCCs!

Here’s the price breakdown in the US (in $US):

Sure, US airports and Canadian airports have different regulatory landscapes, yada yada yada. Still, the fact of the matter is consumers pay more on each ticket here, whether it’s the airport’s fault or the federal government’s fault. That is a fact and is undeniable.

As advocates for travelers, here at Flytrippers we’ll always condemn whatever takes away the option to travel for less… and airport fees are very high on that list. (What do you think? Tell us in the comments.)

For those who have Aeroplan Miles or are interested in earning free travel with travel rewards points, these high taxes are the reason why many wrongly believe that reward flights aren’t worth it… but the thing is, the taxes aren’t necessarily the problem.

It is indeed harder to get great value out of points here in Canada, but credit card sign-up bonuses still give you free travel.

But the reason it can seem like it’s not worth it is that most travelers make the most common mistake: using Aeroplan Miles on Air Canada. Our flag carrier imposes hefty surcharges, so it’s rarely the best use of your miles.

The taxes aren’t the worst, the surcharges scam is. Just be flexible and find availability on United to avoid them and get more value for each mile.

But even if $100 is lower than $200, it’s still bad compared to the US, where a free flight is actually almost a free flight (that’s why hotel points are great, no taxes to pay… but there are also other types of points that are much simpler, we’ll teach you all about these soon).

In the US, you pay almost nothing. Using Aeroplan Miles departing from Plattsburgh or Buffalo will cost you only C$15 roundtrip in taxes, and the same amount of miles, at least for long-haul destinations in the US (Florida, California, Nevada, Arizona, Louisiana, Texas, etc.)

So there is value to be had with Aeroplan Miles, but it requires more flexibility. That’s the whole premiss of variable-value points: the better you use them, the more they’re worth (i.e., the more they save you).

Even better, for Florida specifically, if you live in Toronto or Montreal and you transferred from AMEX to get Aeroplan Miles (which you should definitely do), you can even save 5,000 Points per person by transferring to Avios instead and flying direct on American Airlines. Toronto–Miami and Montreal–Miami costs only 20,000 Points instead of 25,000 with Aeroplan… with just the same taxes and no surcharges.

Now you have a better understanding of Airport Improvement Fees in Canada, and that unfortunately, they are some of the most expensive in the world (not to mention how we’re a little behind the times when it comes to ULCCs).

Did you know that the airport taxes in Canadian airports are some of the most expensive? Let us know what you think in the comments!

Free COVID-19 Tests In The USA (To Enter Canada)

Video: How I got this amazing hotel for free with my Marriott points