Without further ado, here’s the answer: Brazil. Yes, France’s longest border is with Brazil, a country on an entirely different continent. Here’s why.

You’re probably starting to see the pattern with all these trick questions in our quizzes (I’ll have to switch things up to keep you on your toes for our next one haha).

So yes, France’s longest border isn’t with Spain, Belgium, or any other European nation, but instead with Brazil.

First of all, for those who are new to follow us and don’t know that we never make things up, here is the proof from Google: 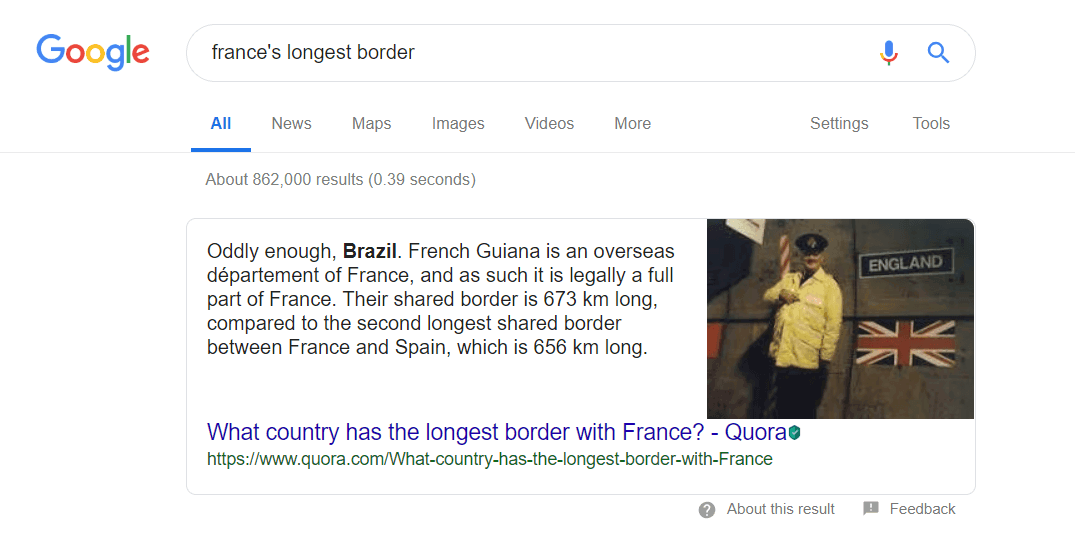 Yes, there is a relatively large French territory (overseas department and region) on the South American continent called French Guiana, which borders Brazil.

It’s the last remaining part of the mainland Americas that is still part of a European nation. As such, it’s legally just as French as metropolitan France back in Europe, unlike many overseas territories that have particular jurisdiction (for example Puerto Rico, which isn’t part of any US state and isn’t a state either).

So since it’s entirely part of France, that territory’s border with Brazil (730 km) means France’s longest border is there, not in Europe.

France’s longest border in Europe (or let’s say Metropolitan France‘s longest border) is in fact with Spain, which narrowly beats out 4 other nations:

But the fact is, the longest border France shares really is with Brazil, via the Guianas region.

By the way, this is a fascinating part of the world, relatively remote and isolated. It would be an awesome spot for those who want to avoid overcrowded, touristy places.

The Guyanas region (named after the Guiana Shield, one of the 3 parts of the South American Plate) is not just comprised of that French territory, as 5 different European countries colonized 5 distinct Guianas:

The Guyanas region was one of the international trips that I had booked for 2019 in my quest to visit every country in the world (Guyana and Suriname). But, after a change of plans, I was able to cancel my non-refundable booking for free, thanks to a pro-tip I will share in an upcoming article.

Make sure you join 50,000+ Canadian travelers and subscribe to our free travel newsletter to get all our content (and 50% off flight deals from your city)!

So there you have it: France’s longest border isn’t with a country in Europe, but instead with Brazil, thanks to the little-known French territory of French Guiana on the South American continent.

Are you surprised? Do you have any questions? Ask them in the comments below.

You’ll probably enjoy this article:
How to save money on rental cars


Advertiser Disclosure: Flytrippers receives a commission on links featured in this blog post. We appreciate it if you use them, especially given it never costs you anything more to do so, and we thank you for supporting the site and making it possible for us to keep finding the best travel deals and content for you. In the interest of transparency, know that we will NEVER recommend a product or service we do not believe in or that we do not use ourselves, as our reputation and credibility is worth far more than any commission. This principle is an essential and non-negotiable part of all our partnerships: we will never give any third-party any control whatsoever on our content. For more information on our advertiser disclosure, click here.

Canada Or USA: Which Country Is Larger In Terms Of *Land* Area (Excluding Water) ?