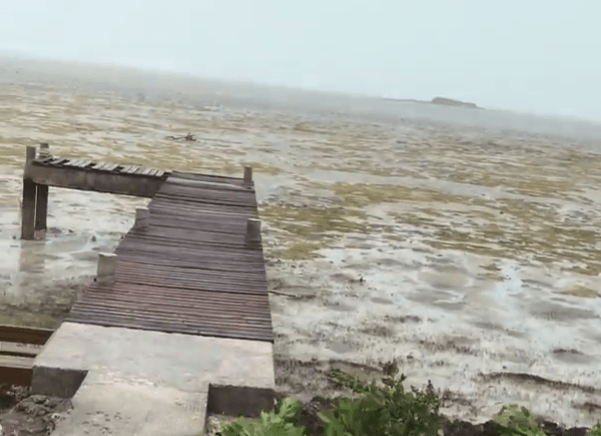 Unless you were hiding under a rock this past week, you know that a hurricane of epic proportions is currently hitting Florida (after going through the Caribbean). But apart from the typical hurricane damage, Irma also made parts of the ocean disappear.

There will be many storylines around this storm once it is all said in done. But right now, let’s start with the fact that parts of the ocean have disappeared.

Yes. It’s a rare phenomenon, caused by those storms that are extremely violent.

In the Bahamas, the ocean has disappeared.

Irma sucked it in, literally.

Here’s a video of where the Atlantic Ocean is supposed to be.

The same thing has now been confirmed in Florida too. It is known as a negative surge. Obviously, it’s only temporary.

The fact is the storm is so strong, for a while it sucks in vast areas of the ocean into the center of the storm.

Then, the hurricane releases the ocean quite strongly. Sometimes directly into the face of some people who think it’s a good idea to take great pictures of the hurricane for Instagram.

Obviously, these aren’t the only fascinating images of this ongoing disaster.

I will spare you all the others that show the devastating effects of the storm, you’ve probably seen a lot already by now.

But maybe if enough people are interested, we will curate a Top 10 images and videos of the storm later on.

There is a lot to say about this hurricane

I love Florida, personally. I’ve been dozens of times (actually 6 times this winter alone), and I really wish the worst can be avoided.

Hopefully, the least possible amount of people will be affected by the rest of the storm, but either way I probably will share an opinion piece that could be considered a but controversial. It’s just that I’m so fascinated by the people over there complaining about the price-gouging issue on plane tickets and most commodities… or just complaining in general.

I apologize in advance to those who do not like contrarian opinions, it will probably be better to skip that article (don’t worry, we’ll keep providing travel tips, inspiration and news multiple times a week).

But for those who could be interested, I’ll share why it’s quite logical (and normal) for prices to go up in these situations…

…and maybe I’ll even venture into my disbelief about how misinformed (or unprepared) people are, and how much they like to complain… but that one may well be too controversial ?

I must say I’ve never been one to shy away from sharing my thoughts, even if they can ruffle some feathers… so why not share it: I would really like to hear your own opinion on these subjects to interact with you guys!

Let me be clear, I really do not want to minimize the ordeal some visitors (and locals) are going through over there, far from it. Of course it’s a terrible situation, no doubt about it.

But it has been known for about 100 years that this time is hurricane season over there… every year… anyways, maybe I should just write a detailed article about how important travel insurance is… or I could delve further and maybe start a nice friendly debate, I do want to know what you think of all this!

Nine years out of ten, you won’t be hit by a hurricane and will have no problems in that area during hurricane season… but it’s still a pretty obvious threat. It can’t be a surprise if it happens, that’s why it’s called hurricane season. If you choose not to get insurance, it’s your choice, it’s a reasonable risk to take… but oh well!

Hurricane Irma (and even Harvey before) is quite historic in terms of strength and impact and the fact that the ocean is being swept away as shown above is actually quite easily one of the least worrying things about the storm, let’s be honest.

Let’s just hope the rest of the storm weakens and hits Tampa and the Gulf Coast less than expected and most of all, that no one else gets hurt.

What do you think of Irma? Do you think it is too sensitive a subject to have a discussion about?