Lisbon, the city of José Saramago, the golden sunsets and the 7 hills. A city that without neglecting its heritage and history, welcomes modernism and liberal thinking. A city with exquisite cuisine, lively nightlife and one of the most generous climates in Europe.

I arrived one day in spring. I read a lot about Lisbon before my arrival, a city often featured on Flytrippers’ cheap flight deals page. All the travel guides and blogs said that it was a warm city, because of its weather and its people.

I have always believed that the climate says a lot about a city. The people who live there have a special shine. The weather makes them warm and smiling people. And Lisbon is just that, it is synonymous with warmth and with friendly people. The spring in Lisbon offers you a perfect environment to enjoy your stay, not only for the temperature; but also because it is a time when the city is vibrant.

I already had a preconceived idea of what the Portuguese capital was like, but when I arrived, my expectations were surpassed and it was even more gratifying. Lisbon has survived modernism, and its inhabitants have known how to respect the historic and heritage value of their city. Streets with marble-clad stones, decorated houses plated with tiles and windows carved in painstaking colors highlight the splendor of the city even more.

The City Of Golden Sunsets

In 5 days, which was all the time I had for my visit, I walked and took pictures of the city tirelessly. Lisbon really is a city to walk around in, to follow its touristic paths and culinary routes. The city has so many viewpoints that you will take hundreds of snapshots. You can see the same viewpoint at dawn, in the evening or at nightfall. It may be the same viewpoint but the postcard will be different. 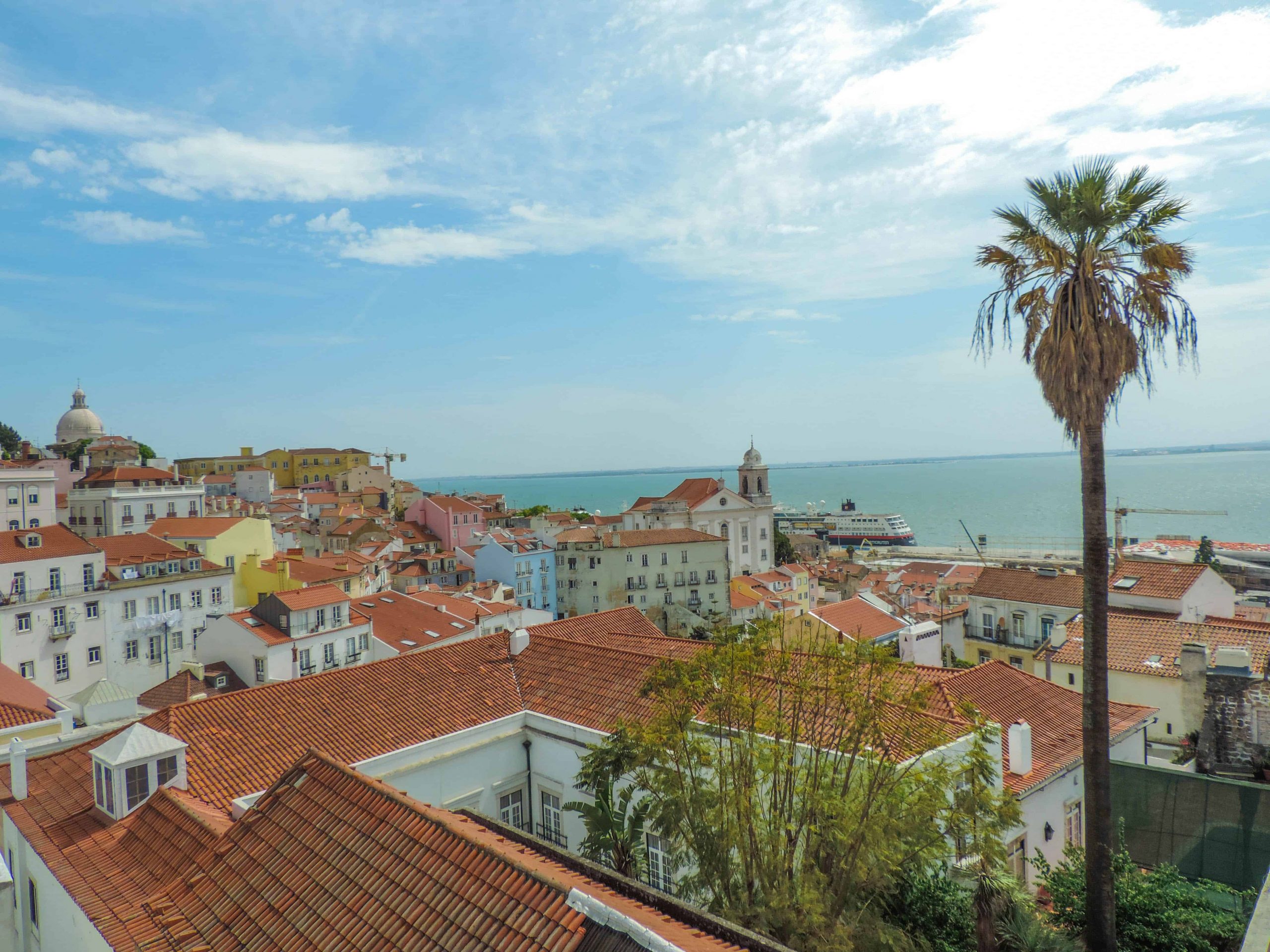 When I arrived, at the end of April, spring had already begun. The twilight was eternal and of a majestic golden. Locals and tourists wait for the sunset from the 7 viewpoints. From the Castle of San Jorge, or from the edge of the Tagus, which is the river that embellishes the city even more and makes it practically a coastal city. The Tagus flows into the sea, and it is directly in Lisbon and a few kilometers away that the water reaches the open sea, to the North Atlantic Ocean.

For me, enjoying sunsets is a pleasure. They are unique moments that give you the opportunity to meditate and think, or simply to keep quiet and observe. But that pleasure of which I speak, it is even greater if you are on the banks of the Tagus, between the two pillars that give the name to the “door” of the entrance to the city. The visitors in past centuries arrived by boat and entered through this door, named Das Columns, crossed the pillars and descended from their barges. Facing the landing, a beautiful square, very European, a little green, but full of history; the famous Plaça Do Comércio.

The sunsets aren’t the only thing that make Lisbon a jewel. Eating in this city is another of the pleasures to which the traveler is exposed. Local food, fusion, and gourmet restaurants are the other side of tourism. The Alfama neighborhood, the oldest in the city and one of the most typical, is a must, and Chiado, a neighborhood where the most sophisticated restaurants and cafeterias that date from the beginning of the 20th century stand out.

If there is someone who perfectly represents the boom of Lisbon food, it is José Avillez, a Portuguese chef awarded with the famous Michelin stars. With a successful empire, and with a well-earned prestige, this chef has a varied range of restaurants. I visited two of them, Bairro do Avillez and Cantinho do Avillez, restaurants that for me stand out for the fusion of their creations, aroma, and flavors.

The neighborhood of Belém (A Few Kilometers From Lisbon) 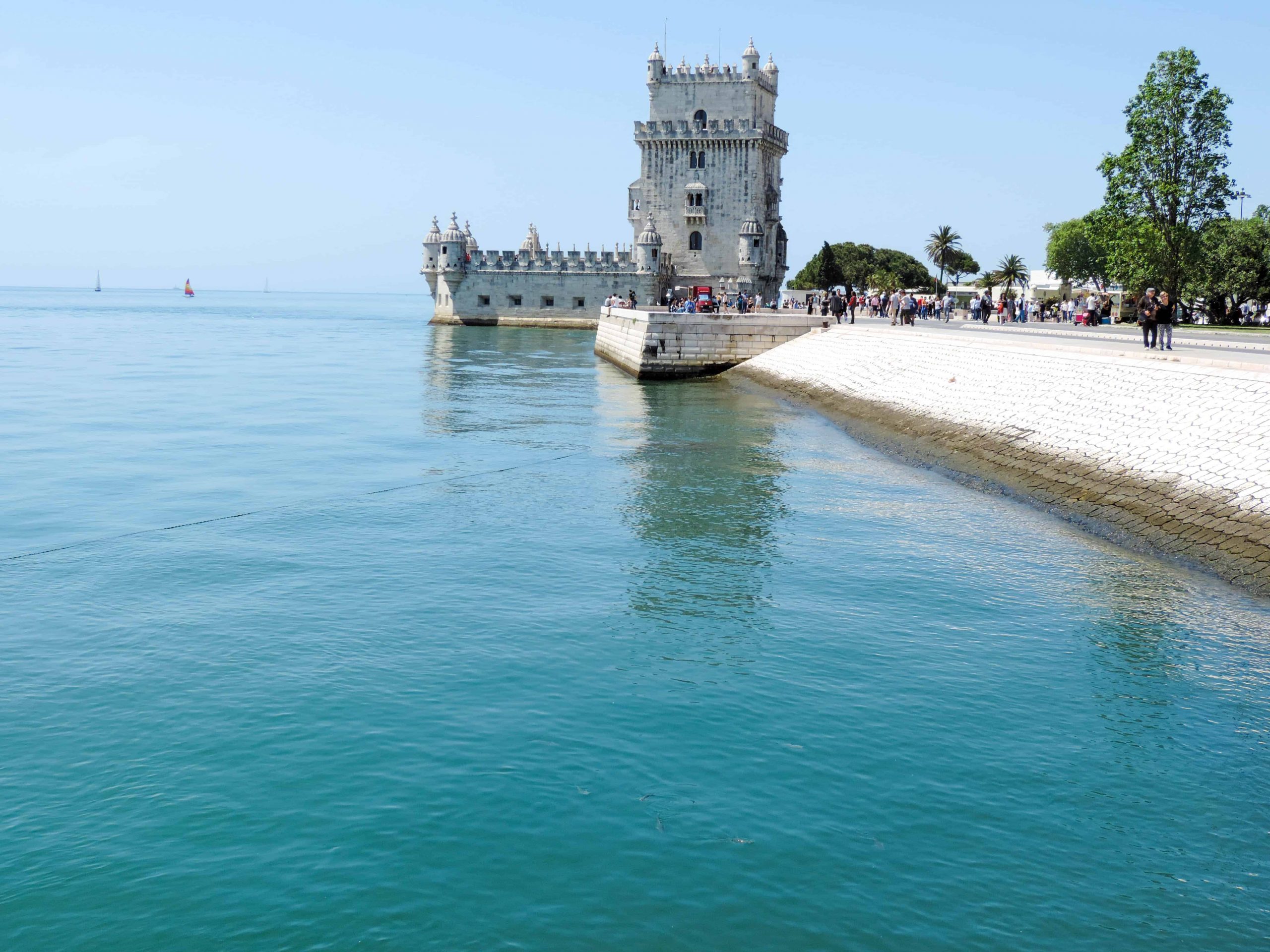 If you have decided to visit Lisbon, you must consider the visit to the Belém Tower and the neighborhood of the same name. The tower of Belém, decadent by the saltpeter of the sea, but equally beautiful, is an iconic postcard of the city. On the banks of the Tagus, it represents one of the most characteristic symbols of Manueline architecture.

In Belém, there is also the Jerónimos Monastery, a building dating backk to 1501 that commemorates the return of Vasco Da Gama  from his trip to India. Both the facade and its interior are imposing, with beautiful and large gardens on the outside. Gothic and Renaissance style, the monastery is very crowded and visited by tourists, so it is preferable that you check the schedules and buy the tickets online; you can avoid long hours of waiting in line.

Belém is also synonymous with the creams, or pastries from Belém, a dessert of roasted milk cream. You have to try the pastry shop Pastéis de Belém, a confectionery that started producing these sweets in 1837 and has not stopped since.

Walking through the city, and not traveling by car, has even more charm; your vision of the city changes. You feel part of it. I decided to walk and I was delighted with its streets and balconies full of tiles and color. The streets of Lisbon have personality. It is essential that you visit the neighborhoods of Alfama, Chiado, and Bairro Alto. Walk and get lost in their tangled and small ruas.

The location of these three neighborhoods is a little distant from one another, and at the top of each neighborhood, on the mountains (which are now part of the city) are the belvederes. Visit them all, because each one will give you a different view. Different angles of the city for different postcards. Your walk will be an up and down, but with a worthy reward.

Each of the 7 viewpoints has something to show you. You will see reddish roofs that are lost in the blue of the Tagus. Golden sunsets if you go at twilight. Points of light if you visit them at night. The panorama, almost always with the Tagus river in the background, makes the view exquisite.

From the top of the hills of São Jorge, São Vicente, São Roque, Santa Catarina, Chagas or Sant’Anna you will distinguish things that you did not see either from below or from the other hills. Each one will be a different way of getting into the city. 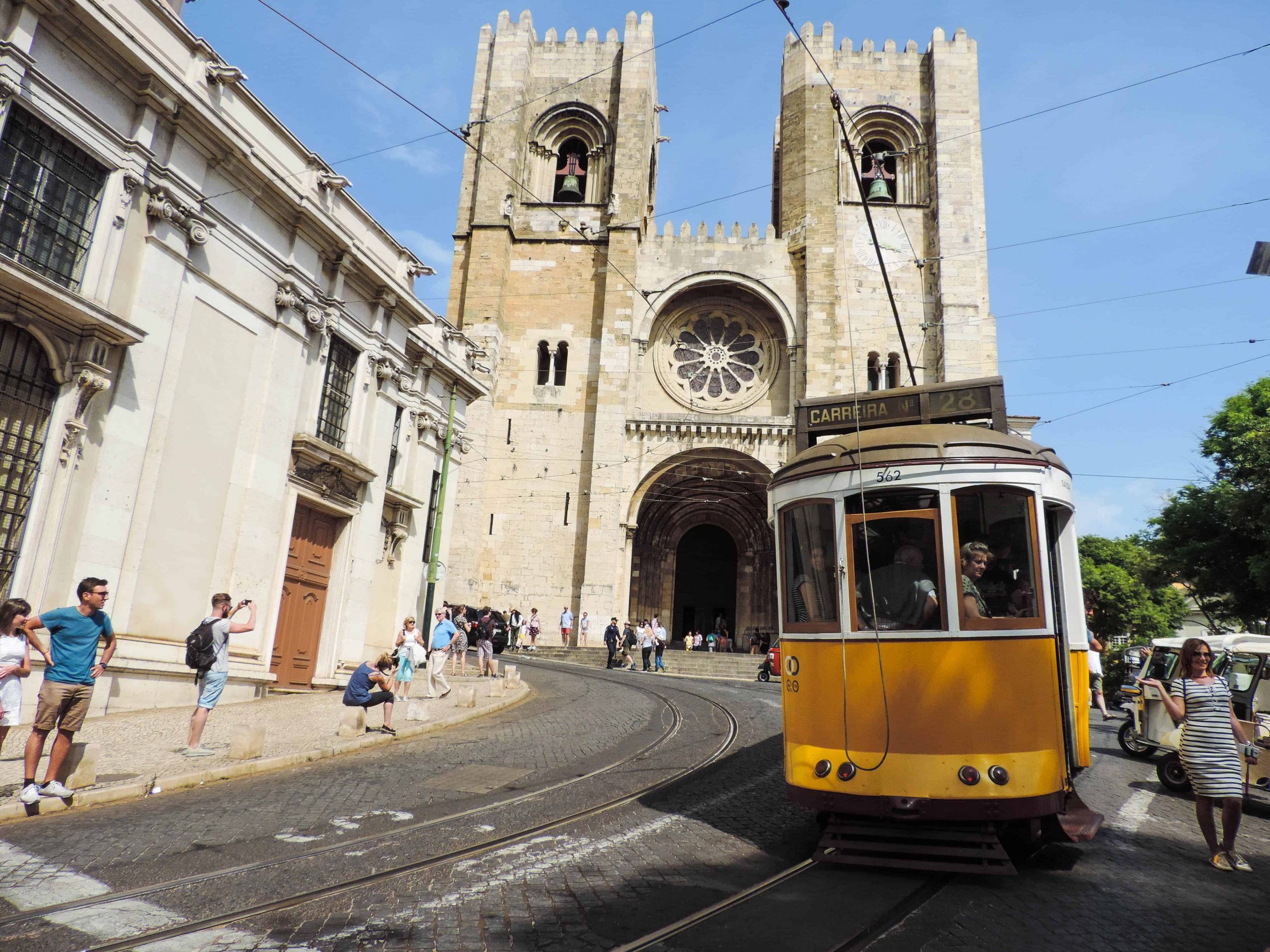 Trams are another icon of the city. Red, green or yellow, whichever you take will be lovely. It is quite the experience, as these trams go back to the 30s or 40s. You will be among the locals who are part of the tumult. Trams are always full.

It is easy to recognize the tourists, always carrying a camera with them. However, it is the locals who will alert you, pickpockets are the order of the day.

Personally, I think Lisbon in spring has everything you would want to see: beach, golden sunsets, streets bathed in marble and tiles, friendly people, luxury gastronomy, nightlife and spectacular views. If you have time, visit the beaches. They are one or two hours away by car.

In Europe very little is heard of the Portuguese capital in general. Portugal is a safe country, without extreme problems and with a high quality of life. In fact, there are reports indicating that Europeans settled in England and Germany, are acquiring properties in Lisbon and its surroundings. It is said that the Portuguese capital and the surrounding cities will be the future vacation cities for the European sexagenarians. 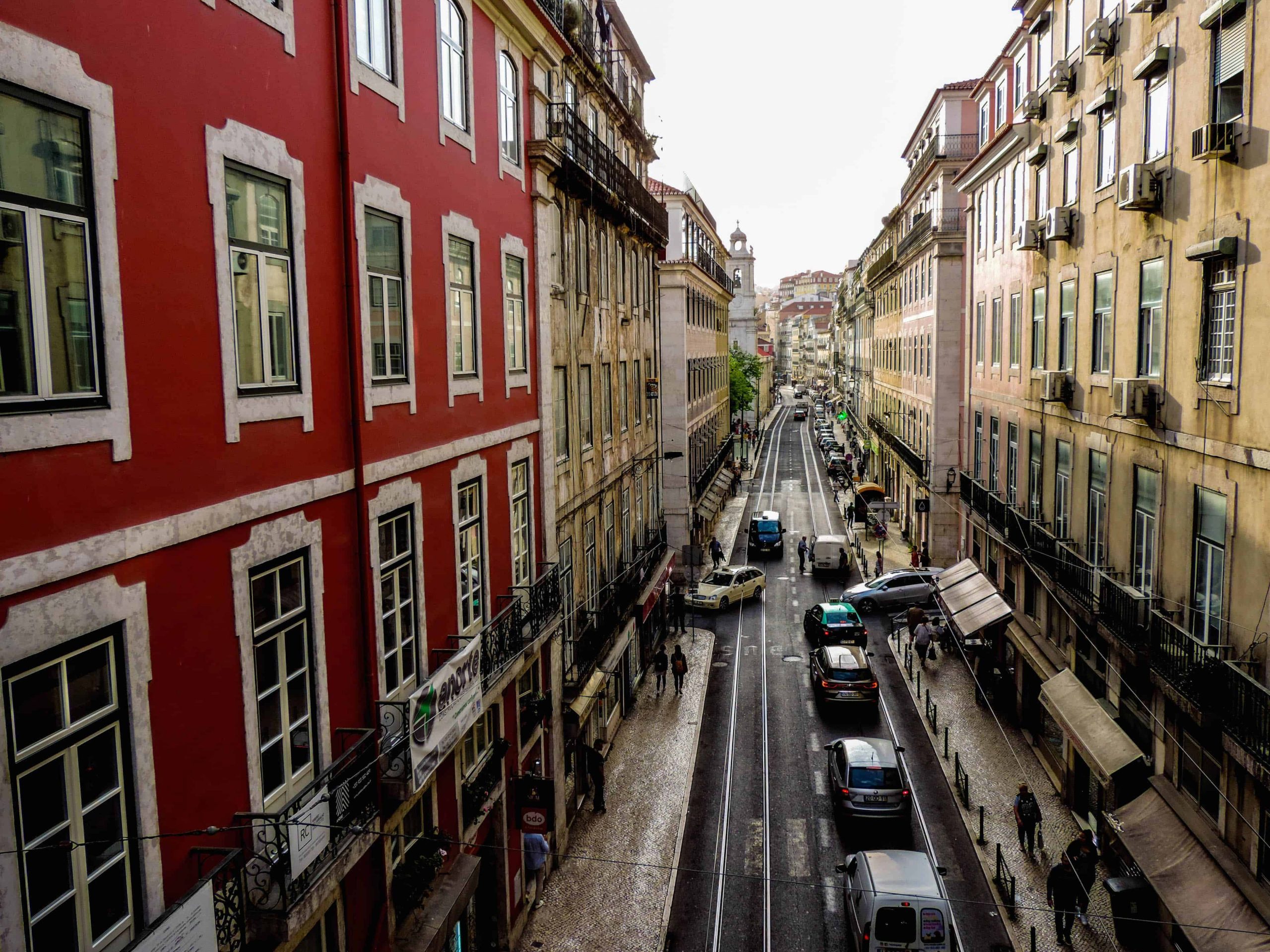 I always say that time, however extensive, is short. You never finish knowing the city you visit. There is always something more to see. You will always lack time to eat a typical dish, walk along a recommended street, visit a museum, go to a trendy bar. Or simply return to that viewpoint that you like so much. There will always be a lack of time, and this argument is not alien to Lisbon.

Ever been to Lisbon? Tell us about it!

I do not enjoy guided tours, rather I prefer to read about the place I visit, its anecdotes and a little of its history so I can take the time that is necessary to enjoy it, take a thousand photos and question each detail that I find interesting. This blog is just about that; we can talk about a tourist town, an urban corner, a busy street; we can question a thousand things about a single place; The idea is to interpret and discover what each destination inspires us. I am an enthusiastic traveler and I discovered it more than 10 years ago with my first trip to Asia. Since then I have tried to travel constantly and discover new places and stories. I am curious and inquisitive, eager to walk the busiest streets of the city, feel part of it, meet new people and try everything that catches my attention.

The Douro Valley Of Portugal: Discovering The Beautiful Wine Region

Faial Island In The Azores: Paradise In The Atlantic Ocean