While Tim Hortons is a beloved Canadian institution, many are surprised to learn that there are in fact Timmies locations in 13 other countries around the globe, from Latin America to Asia, and from Europe to the Middle East. We thought you might want to know where you can come across one on your next trip, whenever that is.

Here’s our map that shows the number of Tim Hortons locations in each country.

(Speaking of maps, we keep getting the same request over and over again: which countries are open to Canadian travelers? For that upcoming map and many other resources for Canadian travelers, sign-up for our free newsletter so we can help you travel whenever you’ll be ready to do so.) 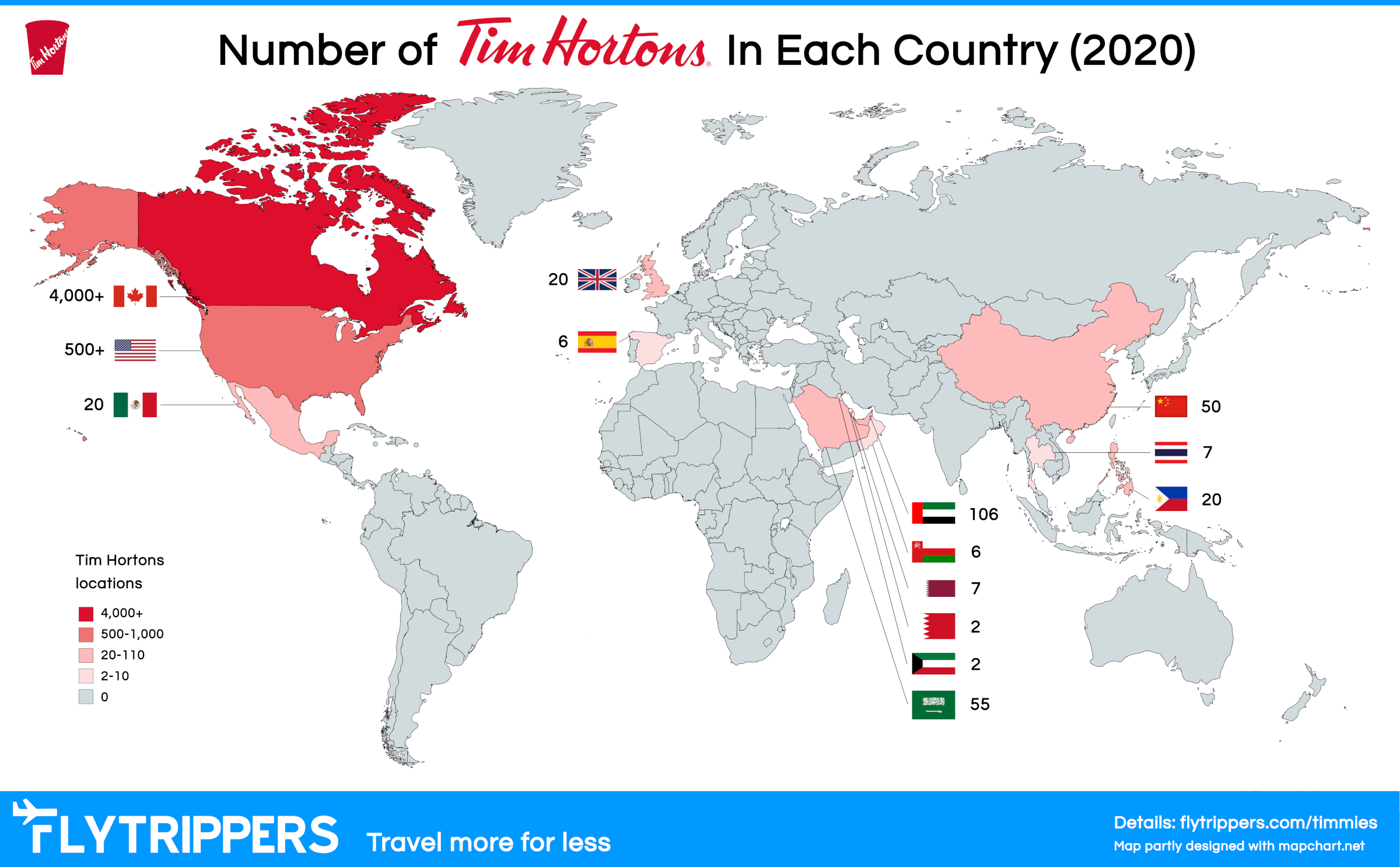 There are just under 5,000 Tim Hortons locations around the world, and unsurprisingly, the majority of them are in Canada (over 4,000). But through master franchising agreements, the iconic Canadian brand has grown internationally in recent years.

And while it would make sense for Tim’s overseas expansion to take place in countries that are most similar to ours, Tim Hortons are not to be found in Nordic European countries with cold climates like ours.

No, outside of Canada and the US, the region with the most Tim Hortons is actually the Middle East, which might seem somewhat surprising given how different the overall culture is over there compared to here in Canada.

Despite the distance, Flytrippers’ other co-founder Kevin can personally attest to the fact that the coffee and iced cappuccinos taste the same in the United Arab Emirates, as he was able to get his Tim Hortons fix in Dubai last year.

It was the month of Ramadan, so they had curtains and panels to hide the food offerings.

As I said; quite different… yet on every other aspect, it’s pretty much the same Tim Hortons as here. And that probably goes for Tim Hortons in the 5 other Persian Gulf countries as well.

I didn’t go to Tim Hortons on my trip to Bahrain and Oman, but at least I feel a lot better from an ethical standpoint knowing that the many weapons the Canadian government sells to Saudi Arabia aren’t our only contribution to the country: they now have a lot of Canadian doughnuts too!

I walked past the Tim Hortons in central Madrid on my trip to Spain (to take advantage of the 17 free hotel nights deal), but I’m probably the only Canadian who doesn’t like Tim Hortons so I didn’t even go inside. In my defense, in terms of dessert, Madrid does have plenty of churro shops, so…

Anyway, the only Tim Hortons you’ll find in Europe are there and in the United Kingdom (though there doesn’t seem to be any in London).

Finally, in Asia, our national restaurant has opened up in 3 countries, including a budget-traveler favorite: Thailand. All 7 locations are in Bangkok, but these have just opened in 2020 so it might grow quickly.

For example, the franchise partner in China expects to open a whopping 1,500 Tim Hortons in the world’s most populous country. And it’s not just the recipes being used: they very much flaunt the Canadianism and try to bring the spirit of Canada to China with the decor as well, including door handles made with hockey sticks (of course).

So next time you’re in one of these countries and want a taste of home, use Google Maps to find a Tim Hortons location.

(Well, except in China—Google products are unavailable there without a VPN.)

Here is the full list (restaurant numbers in some countries are older figures; the most recent available):

There are Tim Hortons in a total of 14 countries around the world, and this map shows you where you might be able to get your taste of Canada on an upcoming international trip!

What would you like to know about international travel? Tell us in the comments below.

Did You Know? You Can Fly To Fredericton… Or To Cancun For The Same Price!