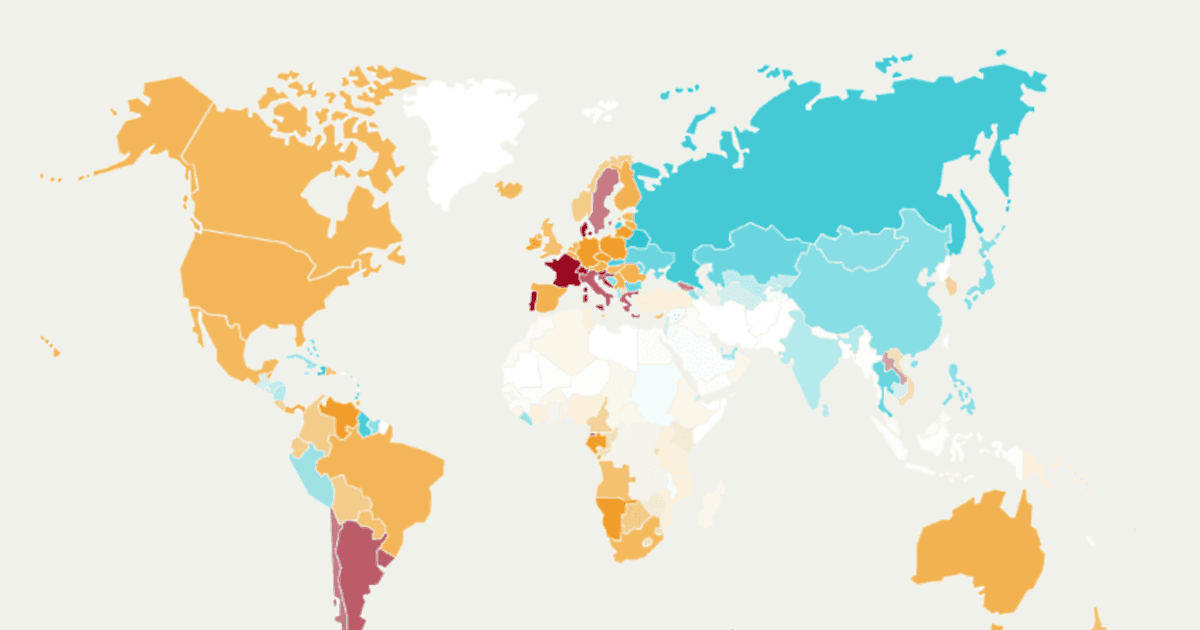 There’s no doubt that a lot of people on earth enjoy a nice drink now and then—especially an alcoholic one. But if you’ve traveled a bit, you’ve noticed that each country has its own preference when it comes to what’s in the glass.

After the Holiday season, there’s no better time to talk about alcohol. It has existed for a long time, and centuries of international travel and trade, as well as historical events, have impacted cultures around the world… in every facet of daily life, like which alcohol each country prefers.

There are 3 main types of alcohol:

Having been to Germany, I know how much they love their beer. I’ve also seen the sub-€1 bottles of wine in France. And I’ve seen grocery stores in Transnistria (a country that “doesn’t exist” with strong ties to Russia), where there are as many vodka bottles as water bottles (and the price is surprisingly similar).

Each country is different. It’s interesting to see a map of what everyone around the world drinks.

Here’s the map that shows what is the most popular alcohol everywhere:

If you want to dive even further into the map and its details, check out the interactive map on Ghost in the Data’s website. It’s pretty cool: just hover over any country to see its booze preferences! We’ll show you below what it looks like for a few main countries.

But first, the details: in 2014, a map of drinking preferences of the world was created by Ghost in the Data with data from the World Health Organization (WHO) about how much wine, beer, and liquor is consumed on average by one person (15 years and older) in one week in each country.

The one consumed the most is then noted as the nation’s preference. Now, keep in mind that this map and its data could never 100% characterize an entire country and its peoples’ drinking preferences, but it gives us a general idea.

Overall, though, it seems to be that each country’s preference is based on whatever they produce well and make the most of: France and Italy with their wines; Germany and the US with their beers; and Russia and Cuba with their spirits.

If we look at the graphic at the top for Canada, it appears that it’s quite evenly spread out. But beer barely takes the top spot!

Looking at the United States, they seem to be about the same, with beer as #1. Although they drink a tad bit more than their neighbors to the north (except for wine).

However, Germany rises to the top in drinking the most beer, with an average of 4 and a half glasses a week!

When it comes to drinking wine, it’s probably obvious who wins this one: France! Can you believe, on average, a French person will drink 10 glasses of wine a week!?

Then, Russia takes the cake in terms of drinking the most spirits, particularly vodka. They drink over 6 glasses a week on average!

In general, geographic proximity implies similar tastes, but it’s far from always being the case.

Spirits dominate, with a few exceptions where beer is more popular. One surprising exception is the Dominican Republic, given their local rum. Costa Rica and Panama close to South America are also beer drinkers, as is Trinidad-and-Tobago just off the coast of South America.

Wine dominates in the Southern part of Europe (Portugal, Italy, Greece), with the notable exception of Spain, where beer wins. Wine also is the most popular in France and Switzerland in the West, in Sweden and Denmark in the North, and in Slovenia and Croatia next to Italy. Beer dominates everywhere else, apart from the very East where Russia, Belarus, Ukraine, Bulgaria, Slovakia, Bosnia-Herzegovina and Albania prefer spirits.

The Muslim world is lighter on the map, as there is a lot less data available and consumption is a lot lower. Where there is data, it’s either beer or spirits that are the most popular, but it’s all relative.

Beer is the most popular on the continent, apart from rare exceptions for spirits (and one for wine in Equatorial Guinea).

Spirits win almost everywhere in Asia. The few exceptions for wine are in Georgia in the Caucasus (although that could be considered Eastern Europe) and Laos. Beer is the most popular in Vietnam and South Korea.

Beer is the most popular in Australia and New Zealand.

Well, for one, it can be said that the world loves its alcohol, and this won’t be changing anytime soon. But what changes from one country to another is what type of alcohol people prefer. Beer, wine, or spirits, there is a countless variety of alcohol to drink and be shared with new friends you’ve just made while traveling!

Do you think that this map accurately portrays the world and its preferences? Do you have any relevant stories to share? Tell us in the comments section below!

Featured image: Map of alcohol preferences around the world (Photo Credit: Ghost in the Data)

How to Use Multi-Ticket Itineraries to Save Money

Did You Know? You Can Fly To North Bay, Ontario… Or To Hawaii For The Same Price!