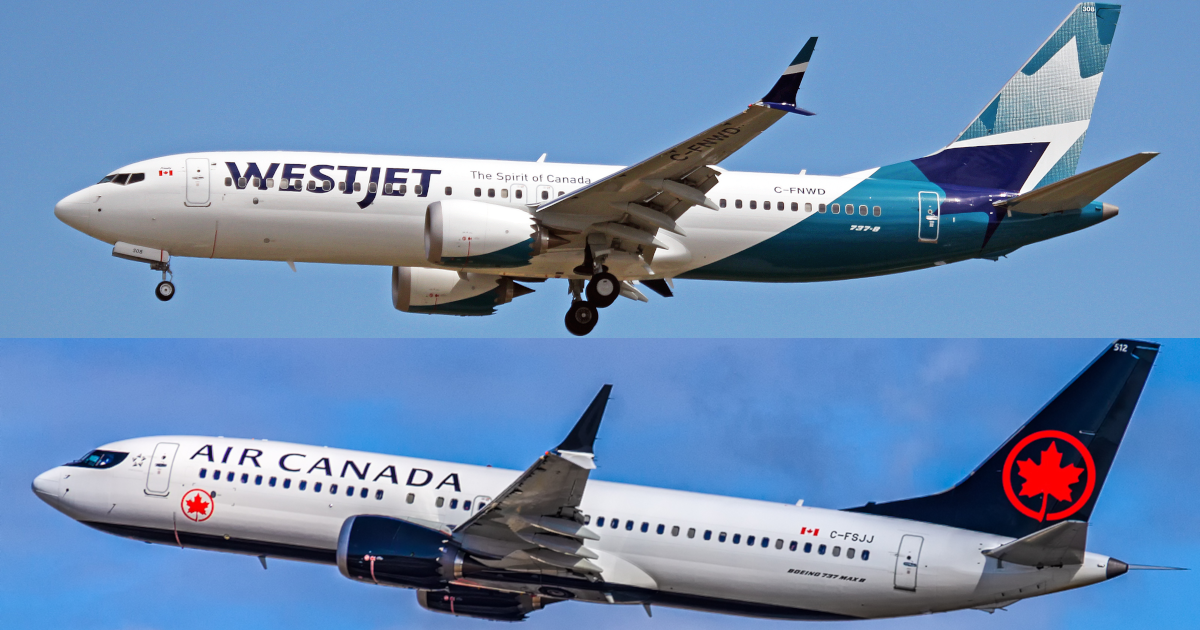 After being grounded for nearly two years, the Boeing 737 MAX aircraft has now started flying once again in the USA and Brazil—and will do so in Canada in January as well. And I am quite certain that many people still won’t want to fly this aircraft, despite the fact it doesn’t make a lot of sense rationally: this recertification process has likely been one of the most thorough ever, due to the plane’s past issues.

WestJet announced yesterday that they will start flying the 737 MAX very soon on one route, pending government approval.

And with Air Canada being one of the world’s largest 737 MAX operators (and Sunwing having a few in their fleets as well), this is a topic many Canadian travelers are probably interested in.

Background on the 737 MAX

I won’t go over the whole story again, as we’ve talked about it in the past: the 737 MAX was involved in 2 fatal crashes due to design errors, which is something that obviously is extremely rare. So in an equally rare move, the plane model was grounded worldwide so the issues could be corrected.

In technical terms, the aircraft’s certificate that allows it to fly was suspended and the plane had to be recertified entirely.

In November, the US FAA (Federal Aviation Administration) gave the green light to the resumption of passenger flights. Brazilian authorities did the same. European Union regulators have also indicated that the plane will be allowed to fly soon.

For your information, American Airlines is already flying the 737 MAX from its Miami (MIA) hub. United Airlines will fly them in the coming weeks from its Houston (IAH) and Denver (DEN) hubs. Southwest Airlines and Alaska Airlines plan on resuming service in March.

And the first 737 MAX flight actually took place in Brazil on December 9th, and GOL has been flying the aircraft from its São Paulo (GRU) hub since then.

Canada is performing its own independent validation process to recertify the aircraft and still has not cleared the 737 MAX for takeoff. But back in November, Canadian Transport Minister Marc Garneau said the process will be complete “very soon”. Things are often slower in Canada.

So for now, the Boeing 737 MAX cannot fly in Canada, but WestJet just announced that they plan to restart flying the 737 MAX on January 21st from Calgary (YYC) to Toronto (YYZ) pending government approval. That likely means that they expect the authorization to come before then.

Flytrippers reached out to Air Canada, who responded that their tentative date for service resumption is February 1st, pending approval of Canadian regulators. Sunwing has not responded at the time of publication.

We’ll let you know when the aircraft’s return to Canada becomes official, even though you shouldn’t really worry about it…

They messed up with the 737 MAX, something that basically never happens. So you can be sure that they have done their homework and ensured that this plane is safe to fly this time. With the FAA and Boeing both having been severely blamed, they certainly had to make sure they got this right.

This plane is probably the most scrutinized and inspected model out there. There has been a level of analysis that has never been seen before in commercial aviation.

You might be one of the travelers who think that since they messed up the first time, they can mess up again.

But they simply can’t afford another mistake, which is why this recertification took so long (it was the longest aircraft grounding in over half a century).

Some will inevitably say that everyone is motivated by money and would do anything to get the plane back in the sky… but it’s actually quite the opposite: the Boeing brand has been severely damaged by the 737 MAX debacle (it has even been described as the biggest corporate blunder in the business world’s history). They’ve lost billions and billions, and their CEO was even forced to leave.

Can you imagine for a second what would happen if another 737 MAX was to crash due to this design error? That would be the absolute costliest thing, and they certainly can’t afford that.

So if this plane wasn’t fixed, it wouldn’t be approved to fly. Especially with air traffic at an all-time low and absolutely no rush whatsoever to get the planes back in the air.

As we said, we always tell it like it is, based on the facts.

And it’s just fascinating that everyone always says to trust the experts (and rightly so), but when the experts say something that goes against what some people “feel” (that is not based on any facts or evidence), suddenly experts aren’t so trustworthy…

(Come to think of it, it’s not unlike how, despite all the proof and studies showing that air quality on planes is better than in buildings on the ground and that factually the coronavirus transmission risk is minimal on planes, many people will never even consider changing their mind about their emotive and impulsive belief that planes are dangerous for coronavirus transmission, because that’s how they feel despite not knowing anything about the evidence.)

It’s okay to be prudent, but being prudent doesn’t mean clinging to an emotive and impulsive response even after analyzing what all experts—who know infinitely more about aviation safety than all of us—say after working nonstop to fix the plane for 20 months.

Every single aviation expert has said that the plane is safe:

But some people at home, who can’t even tell the difference between a 737 and a 737 MAX (or doesn’t even know there’s a difference!!!) say it’s unsafe, despite having no knowledge about aviation safety.

Sure, crashes are traumatic and obviously a terrible thing. Fear is a strong emotion, for some more than others. But still, feelings don’t change the fact that experts from many countries made countless verifications and say that the 737 MAX is now safe.

According to the FAA administrator, who was in charge of the recertification and took the plane for a spin himself as a former pilot, “the design changes that we have overseen make it impossible for these accident scenarios to reoccur.”

If that’s your case, we’ll still help you avoid the 737 MAX if that’s what you want, because our mission is to help travelers (that’s why we keep informing travelers about the current reality of travel and even published a free checklist about the many risks that traveling during the pandemic involves… to help those who are traveling).

So we’ll have two upcoming posts about the 737 MAX:

The Boeing 737 MAX’s return to Canada will come very soon. Every aviation safety expert says it is safe to fly. They probably know more than we all do about whether or not the issue is fixed.

What do you think of the 737 MAX’s return? Tell us in the comments below.

Gift Cards: Tip To Get 100% Or 200% More Rewards With No Additional Effort

Map Of Selfie-Related Deaths Or Injuries By Country