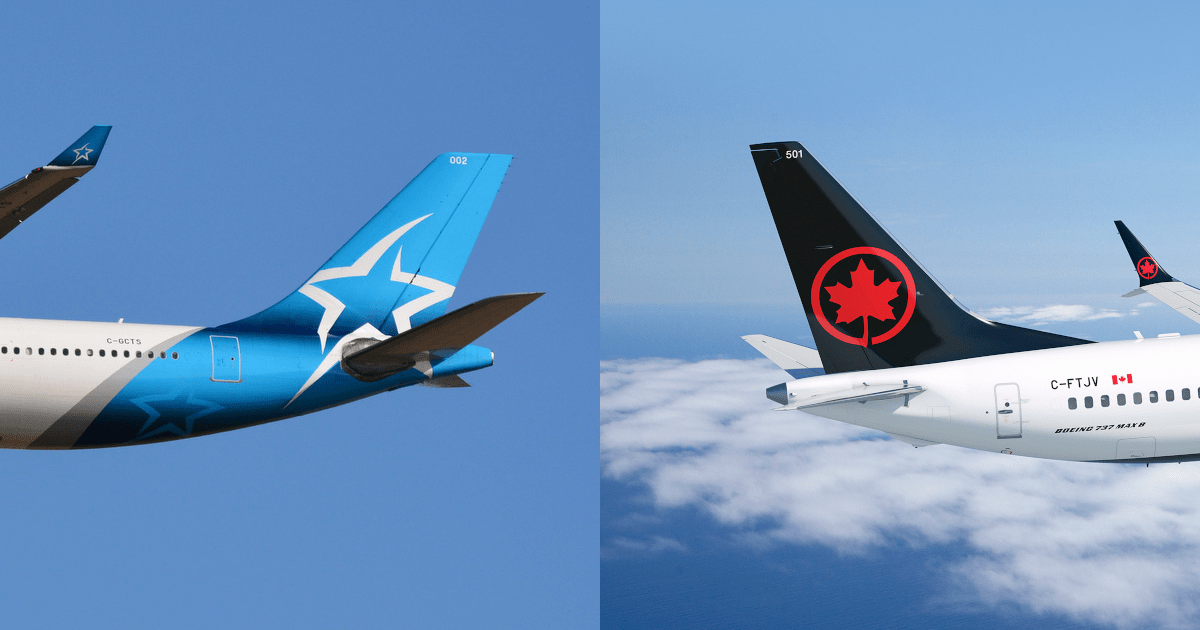 While it was buried within the recent seemingly-unending succession of bad news related to the aviation industry, just over a week ago, the Competition Bureau of Canada released its analysis report about the proposed takeover of Air Transat by Air Canada. The government agency has concluded that it would be detrimental to competition in Canadian air travel.

It was to be expected: we told you when the proposed acquisition was announced, it is definitely bad news for competition in Canada. There’s no debate that having two separate airlines is better for travelers than having just one airline. Less competition and less choice… that’s bad.

In that May 2019 article, we actually wrote specifically that the one way the acquisition could be good for consumers is if the alternative is Transat simply disappearing. (Having two airlines is always better than one, but if there’s going to be just one anyway…)

That did seem like a rather obscure probability mere months ago—Air Transat has been in operation for decades and seems to be well-regarded by their customers—but in this new unprecedented reality, who knows? The impact will be major, sadly. Airlines will likely get taxpayer money, but how much? What will the industry look like after this?

And that’s this report’s caveat: while it was released in late March, it was completed before the coronavirus crisis and its brutal impact on airlines around the world, including here in Canada, of course.

Contents hide
The Competition Bureau Report
Will The Transaction Be Approved?

First, here are key highlights of the report (emphasis is mine):

Air Canada’s proposed acquisition of Transat is likely to result in a substantial lessening or prevention of competition in the sale of air travel or vacation packages to Canadians.

Eliminating the rivalry between these airlines would result in increased prices, less choice, decreases in service and a significant reduction in travel by Canadians on a variety of routes where their existing networks overlap.

Again, this should be a surprise to absolutely no one. Whether or not you’ve studied business or been a management consultant, this is a very basic and straightforward principle.

We’re talking about the country’s biggest airline eliminating 1 of the only 3 other major airlines… in a country where the price of flights is already among the highest in the developed world.

However, to be clear about what this report is—and what it isn’t—it is not binding and is not a decision (just like the Canadian Transportation Agency’s “declaration” legitimizing the practice of giving a travel credit when passengers are entitled to a refund).

This Competition Bureau study only analyzes the situation and summarizes its “public interest assessment”. The Canadian Cabinet makes the final decision on whether or not to approve the transaction, regardless of what the report says or what the Competition Bureau thinks. I’ll talk about what will probably happen next in the following section.

But first: the coronavirus crisis hovers over everything these days, especially the travel industry. For what it’s worth, in 2019 Air Canada agreed to pay $18 per share for this acquisition, but Transat is trading for under $8 now…

The Competition Bureau explicitly acknowledges in the report that “the impact of these events on the Canadian airline industry appear to be significant in the near term”, which is also something that’s very obvious. They are also very correct when they say that “it is impossible to know the full extent and duration of any impact at this time”.

Whatever happens, it’s nice to see that a Canadian public agency is worried about consumers having less choice, though.

Will The Transaction Be Approved?

Who knows how Air Canada and Air Transat will fare after the coronavirus. How bad will it be for both?

This crisis is shaping up to be simply horrible for airlines, the worst in recent history.

Apparently, some think the Canadian government will let all airlines fail (or want them to), but given the scale of all this, that would seem unlikely.

(That’s why many find it highly questionable for airlines to disregard contractual laws and confiscate the money travelers are entitled to in addition to getting a lot of taxpayer money, which is likely—in the US, airlines got 50 BILLION dollars.)

Given the dire situation, it could be very costly and the Canadian government would likely save money by having to help only one bigger airline, rather than two separate ones. That might be the deciding factor, regardless of whether that’s best for consumers or not. We’ve just seen with the credits vs. refunds issue (and the Bill of Passenger Rights last year) that they likely aren’t going to side with consumers anyway.

So your opinion on a potential airline bailout and your optimism (or lack thereof) about the aviation industry’s short-term rebound is likely to influence your thoughts on whether the transaction should be allowed or not.

As a reminder, Air Canada is #1 in Canada, while Air Transat is #4.

Many travelers don’t care much about this transaction because they think that only those who like all-inclusive vacations will be affected since that is Transat’s core business (and they will: Air Canada and Air Transat will control nearly 50% of the market to “sun destinations”).

But the impact is actually worse for travel to Europe: the combined airline would have over 63% of the transatlantic market! And the closest competitor has only 11% (in addition to being a foreign carrier).

Air Canada and Air Transat overlap on 83 routes (22 of which are only operated by these two airlines):

You can read more details about Air Canada’s acquisition of Air Transat in the original post from the announcement.

So will the transaction be approved?

Even if the Competition Bureau is preoccupied and this report seems negative, to be honest, I would have been surprised if the government didn’t approve the transaction… even before the coronavirus crisis.

Now? I would be absolutely stunned.

What do you think about the transaction? Should it be authorized by the government? Tell us in the comments below.