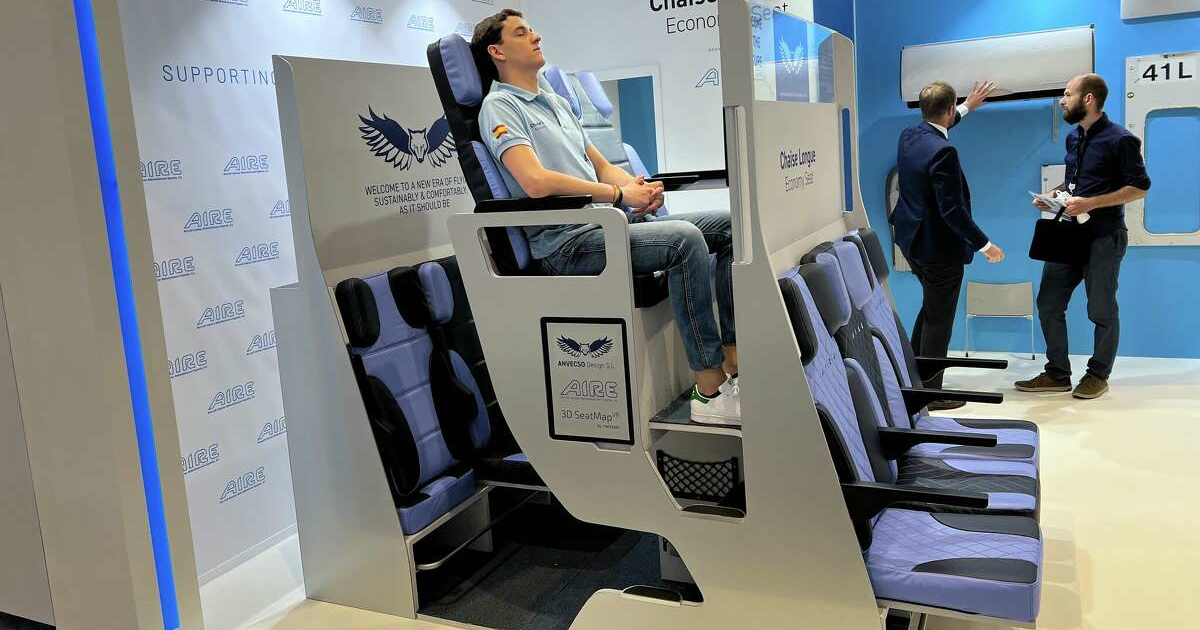 In case you weren’t excited about this new double-decker seat concept presented last year, we had reassured you by saying that new airplane seating concepts are released relatively often, especially for economy class seating… but the reality is that there has been very little innovation in this space. And none of these concepts ever seem to get anywhere close to being tested on actual commercial flights.

That remains true, even if the double-decker seat that was just a conceptual sketch last year is now an actual physical prototype.

Here are the details of this interesting seat concept.

The Chaise Longue seat would revolutionize economy class according to many. According to others, the revolution would be to now get farts straight into your face. Oh well.

In short, they’re still as far from being popular as they were last year.

Here are a couple of photos if you want to see what it looks like in real life!

It’s true that this would provide a lot of legroom, almost like a 180-degree lie-flat business class seat (that you can with a huge discount with the current record-high deals by the way— detailed post to come tomorrow)

The cabin would have a very different look, as this simulation shows.

Unsurprisingly, as with all other seat concepts, there’s still no news of any airline wanting to take this further.

I’ll let you read the initial details if you missed them. Along with images of 2 other very unique seat concepts unveiled in recent years at the end.

Unveiled at the annual Crystal Cabin Awards in 2021, the Chaise Longue concept (that means “lounger chair” in French) is quite revolutionary.

It aims to give economy class passengers both extra legroom and the ability to recline their seats without being a jerk to the person sitting behind.

(Sorry, I just personally really prefer seats that don’t recline at all and that’s why I love ultra low-cost carriers that have non-reclinable seats!)

Seat rows would be staggered: they would alternate between being at floor level like they are now and being slightly elevated.

Here is a cross-section view of the concept designed by a student at TU Delft University, in the Netherlands.

Overhead bins for carry-on baggage would be replaced by compartments under the second elevated row of seats.

(Although I am not really sure that those contain the same volume of storage space, which would be very problematic given how more and more passengers are — finally — discovering the upside of traveling light with carry-ons only!)

I highly doubt that any of us will be sitting in this type of seat anytime soon.

Yes, speaking of aviation innovation, United Airlines became the first airline to place an order for supersonic planes built by Boom Supersonic the same week as this seat concept was unveiled. United has ordered up to 50 Boom Overture aircraft to be delivered starting in 2029 (these can fly at a speed twice as fast as current airliners).

We already talked about a few very popular airplane seat concepts, so here are the links if you want to explore these once again.

The AvioInteriors stand-up seats were the most promising, as these could theoretically allow even more people on a plane to reduce ticket prices significantly!

Finally, the Janus seat concept was a very strange one that flipped the middle seat.

It seems like it was more of a coronavirus precaution than anything else. Thankfully, even the experience onboard planes is back to normal already — only in rational countries though, not in Canada of course!

Want to get all the important updates for Canadian travelers?

The Chaise Longue economy seat concept is probably not going to be installed on a commercial airline any time soon, but it’s nice to see that there is at least some form of innovation being considered to try and shake things up within economy class!

What do you think of this airplane seat concept? Tell us in the comments below.