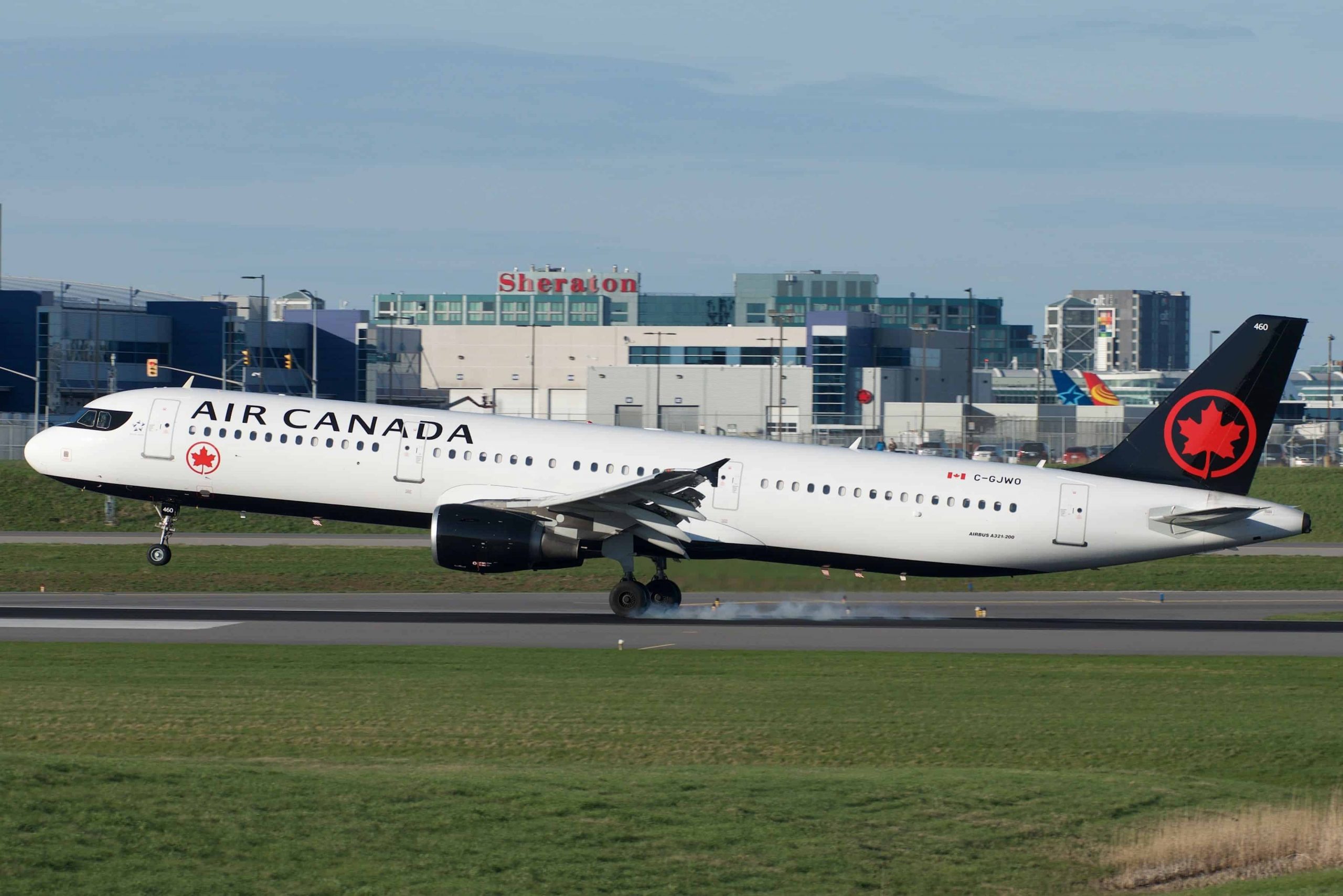 Did you know that people sitting on the exact same Air Canada flight who will have connected from the US have often paid half the price you paid if you boarded in Canada? For the exact same flight! Here’s a funny (or sad) example of how airfare pricing works — and why it actually makes sense.

Our priority at Flytrippers is spotting amazing flight deals from 9 Canadian cities, but we also want to help you travel more with great tips on this blog to share our air travel expertise. And a lot of the most frequent questions we receive from our readers happen to be about how flight prices work.

For example, why is it often cheaper to fly from Montreal to Asia than from Montreal to Vancouver, even though the latter is obviously way closer. And why I can fly for $18 in the US, in Europe and Asia but flights within Canada are terribly expensive.

It’s a very complex subject that can’t be wholly covered in a single blog post, but let’s give you a few answers by using this funny example.

One that is especially ironic given the current trade tensions between the US and Canada ahead of the G7 Summit. Maybe Air Canada sells its flights cheaper to Americans as a way to say sorry for us burning down the White House in 1812. Just kidding, here are the real explanations.

This particular case is an actual price pulled from Air Canada’s website just this moment. It is in fact very frequent and it goes to show how complicated the airlines’ algorithms and strategic decisions to set flight prices really are, and how important it is to use our flight deals to save money on your plane tickets, because it’s easy to overpay.

Currently, Air Canada is marketing (to American fliers, on their US website) flights from Detroit to Amsterdam, via Toronto, for only $398 USD ($515 CAD).

Obviously, that second (and main) flight segment can also be booked from Toronto alone. The price for the Toronto-Amsterdam segment that is sold to Canadians? It’s $1,322 CAD. Yikes.

Okay, to be fair Air Canada sells flights to Americans with no checked bags (Basic Economy is more popular there), so let’s add in that cost. Now the flight sold to Americans is $568. Still less than half what Air Canada charges Canadians for the same flight.

Yes, you have two less flights (Detroit-Toronto and Toronto-Detroit) but pay more than twice as much as Americans do, to fly on the exact same Air Canada flight. You pay a nice 133% premium to be precise.

One last time, just to be crystal clear: say you live in Toronto and book this flight. From Toronto to Amsterdam you will be sitting next to an American who has had an extra flight segment, who is going to the exact same place as you, on the exact same plane, and still paid less than half of what you paid.

You could actually book the flight from Detroit, buy a separate roundtrip from Toronto to Detroit, and still save money compared to buying direct from Toronto. Really. You’d come out ahead by a couple of hundred dollars compared to the Toronto flight alone. Again: for the exact same flight to Amsterdam on Air Canada.

Our national carrier. So much for a hometown discount, eh?

Like I said, this is actually quite frequent (there are many examples where Californians pay half the price to go to Asia via Vancouver as Vancouverites do). Many people are surprised about this quirk so I figured I’d take the time to explain how this can happen and why it’s actually kind of normal, as much as it pains me to say so, since I’m such a low-cost flight enthusiast.

What you must understand is that despite the fact that it would be quite logical, the distance flown actually has very little impact on flight prices. Sure, generally, the further you fly, the more expensive it gets. But it isn’t the main factor.

Same goes for the number of flights. Logically, some would think that the ticket with a connection, that involves more flights (more fuel, more employees, more costs, etc.) would be priced higher because passengers use up more resources and cost the airline more money. But that’s not how it works at all.

There Is Less Competition In Canada Than In The US, So Air Canada Can Get Away With Selling To Canadians At A Higher Price

As explained in our article Why Flights Are So Expensive in Canada, one of the main problems in Canada is the lack of competition in the aviation industry.

So airlines can sell their transatlantic flights for a thousand dollars here. No one bats an eye. Well, no one except Flytrippers readers. We went to Europe ourselves for $247 roundtrip in January thanks to a deal we spotted, and we often have flights to Europe from Toronto for $400… just not on Air Canada, obviously.

Over $1,000 for a transatlantic flight just wouldn’t fly in Detroit. They are used to much more competitive fares in the US, so in that market, Air Canada has to lower their prices.

Air Canada therefore prices their Detroit-Amsterdam route completely independently from the way they will price the Toronto-Amsterdam route, even though the exact same flight will be used by both routes.

And there’s absolutely no prestige to flying Air Canada if you’re not Canadian. Americans don’t take any pride in flying Air Canada. Honestly I don’t care at all either, all I care about is the lowest price so I usually avoid Air Canada, but I know many Canadians seem to prefer flying our flag-carrier even if it’s almost always more expensive.

Since Americans simply wouldn’t usually pay a premium to fly Air Canada, it has to be priced lower, that’s just good market-driven pricing.

A Flight Is Actually The Service Of Getting From One City To Another, Regardless Of Stops

Direct flights are more expensive, that’s also somewhat normal, I’ll get back to that right after the screenshots.

And since Detroit is a strong Delta Air Lines hub, other airlines again need to be priced cheaper than the the hometown airline, or else no one would fly with them.

Finally, fliers in cities that are hubs for a specific airline generally must pay a premium on that particular airline, for the added convenience of more routes and the emotional connection. The problem in Canada is that with only one current international airline (WestJet will become one, but isn’t quite there yet), basically all Canadian airports are Air Canada hubs.

So basically all Canadians must pay more that what Americans pay when Americans fly our airline via our Canadian airports. 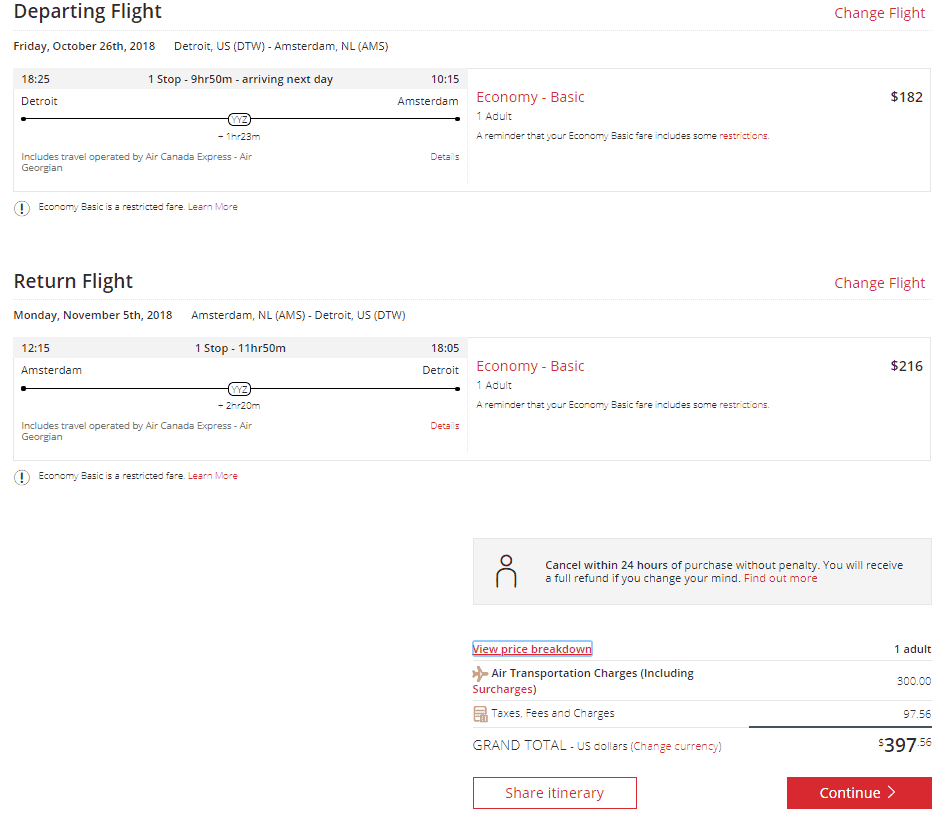 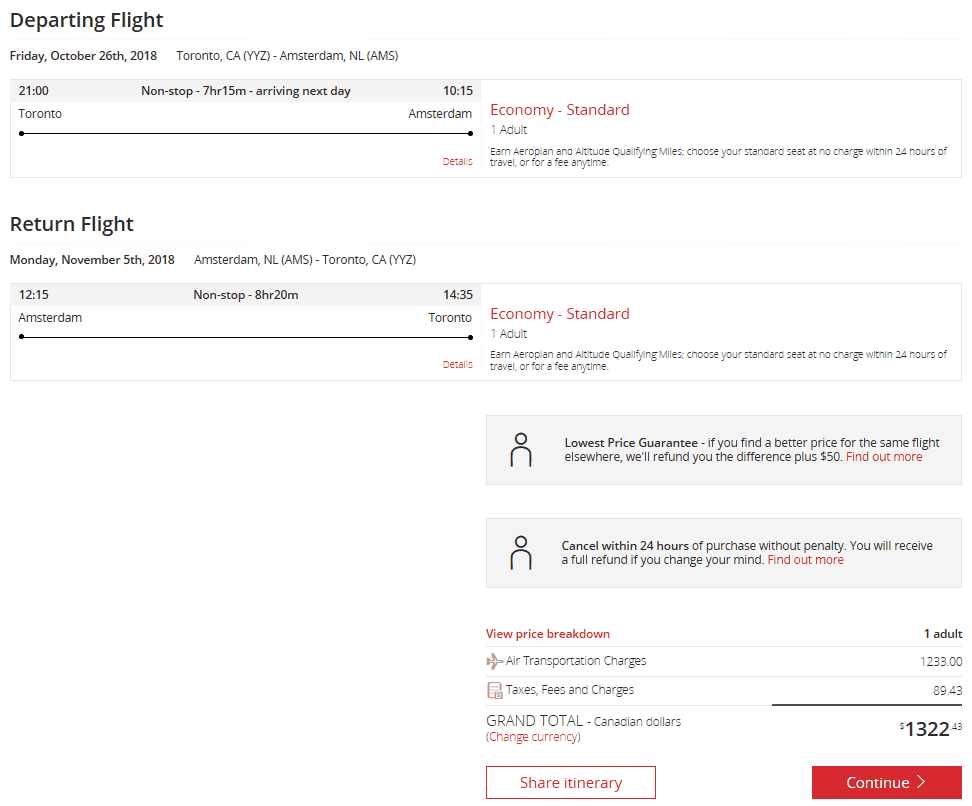 Just another thing to point out in the price breakdown: for all the talk about taxes being higher in Canada than the US (because they really are), you can see above that the taxes come out pretty much the same from Detroit or from Toronto (that’s because the Detroit itinerary has 4 flight segments so 4 airport taxes compared to 2 for the Toronto itinerary).

But my point is the $754 difference in price is almost all in the air transportation charge, the actual price Air Canada sets itself, so taxes are not even partly to blame for Canadians paying twice as much. Not this time at least.

And as you can see below, it is the exact same Toronto-Amsterdam flight in both cases (AC 824 on the outbound segment), but just 133% more expensive when leaving from Toronto…

In case you are interested, you could actually buy the flight from Detroit and save over $700. You’d have to make your way there to board though, but you could disembark in Toronto directly on the return at least (assuming you fly carry-on only).

You can’t board in Toronto though: that’s purposely circumventing the “a flight is the service to get from one city to another city regardless of stops” rule I just explained, and often airlines cancel your entire itinerary as soon as you skip one segment.

I know it seems irrational and I hate that we have to pay so much more than our Southern neighbors, but it makes sense: people in different markets are willing to pay different prices, so airlines have to set prices accordingly.

That’s why direct nonstop flights are also often much more expensive than connecting flights, even though operating costs are lower for one flight than two, as mentioned earlier.

However, what isn’t normal is how huge the difference is. More than twice the price, for the exact same flight to Amsterdam is really frustrating. But can you really blame Air Canada?

First of all, filling planes with American passengers allows Air Canada to have more volume and therefore more destinations, more frequencies and more options for Canadians than if they only marketed to Canadians. However, maybe they could pass on some of those low prices to us here in Canada a bit more often…

And as I said, Canada is ranked among the most expensive countries in the world for air travel (130th out of 138 countries for domestic flights in one recent study for example), but a part of that is also caused by structural factors that Air Canada has no control over.

The good news is Ultra Low-Cost Carriers (ULCCs) are now here, and they are the best thing to have happened to the air travel industry in, well, forever.

Expect airfares to get cheaper, as they have in the US, in Europe, in Asia and in fact everywhere ULCCs are present.

Flytrippers will be here to spot the cheap dates to fly to every single destination that is on sale and publish them daily on our flight deals page. You can also subscribe to our free newsletter to never miss a great flight deal, like the Toronto-Europe flights under $200 roundtrip, the Vancouver-Asia flights under $400 roundtrip and many many more we’ve shared since we launched last year.

Even after this very lengthy post, I haven’t even covered all that can be said about the complex issue of flight prices. Tell us in the comments what you would like to know next and most importantly what you think of this Air Canada situation!

Flights to Europe Starting at $65 Are Coming to the US