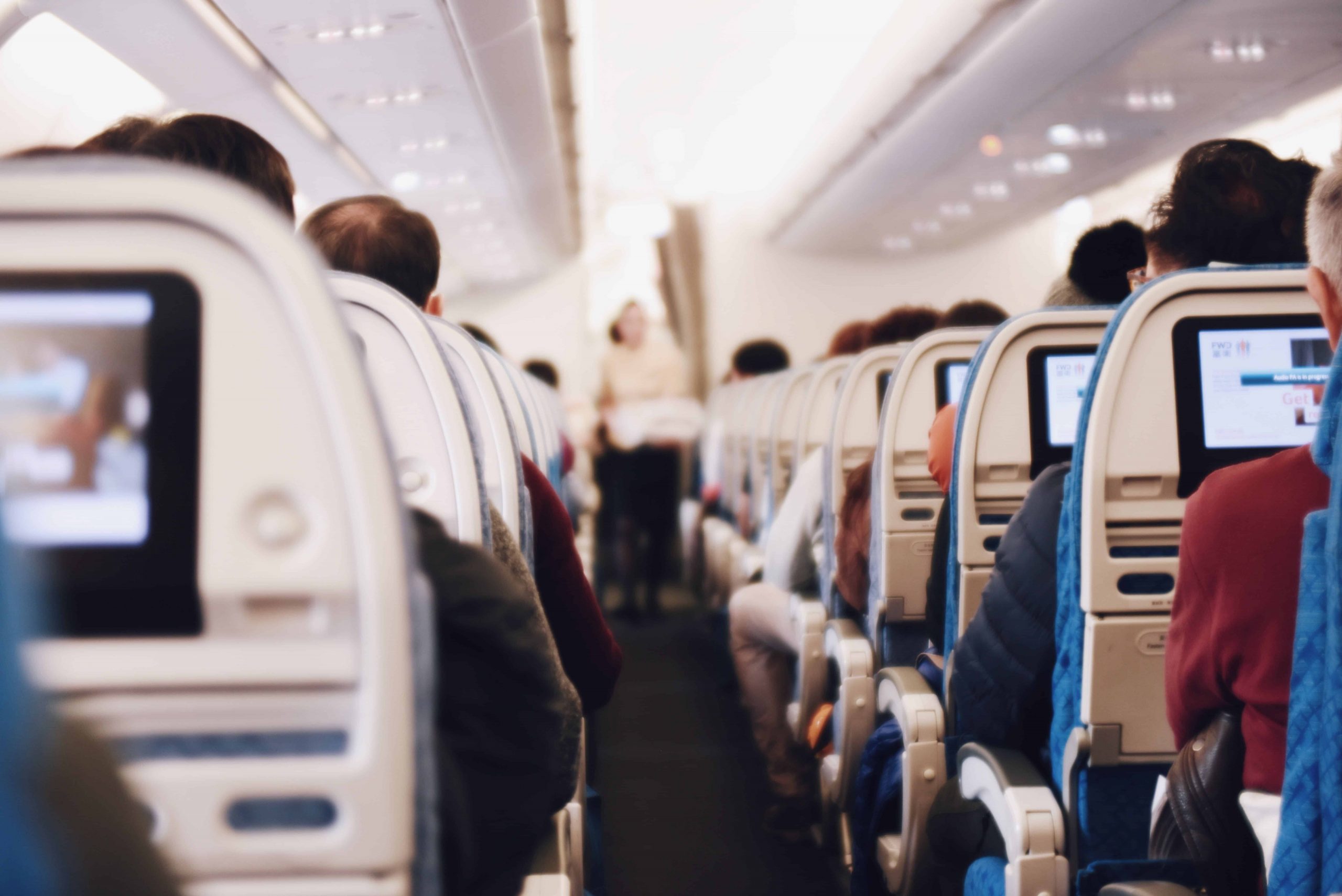 When you fly frequently, you see all kinds of things. Obviously, some people don’t have very good manners in day-to-day life, so, unfortunately, there is a good chance their behavior on a plane will be just as unpleasant.

However, many decent people are simply unaware of etiquette rules on a plane. It’s quite normal: if no one ever told them or if they don’t fly often, some aren’t necessarily obvious (especially #6).

But theses behaviors remain nonetheless very annoying and unpleasant for everyone else on the plane. To help you avoid being that passenger that the 200 other people find annoying when you book a flight on our cheap flight deals page, here are our tips and tricks on flying etiquette.

1. Sit in the right seat

Even if you don’t take the plane often, there are no excuses: you have a number and a letter to remember, so make an effort and sit in the right seat. Having to change seats is unpleasant but it also delays the take-off: this behaviour actually raises the price of plane tickets in general for everybody.

Yes, if the plane is not in the air as quickly, it generates additional costs to the airlines… that are obviously passed on to passengers.

2. Get out of the aisle fast during boarding

Let’s stay in the same boarding theme. Please, for the same reasons as above, hurry and leave the main aisle. Put away everything that goes up in the bins and when everybody is seated, or worst case scenario when the plane is in the air, you can get back up to stow your coat (or even better, take it off before getting on the plane, this way it’ll be ready to stow) or get what you need if you didn’t think of it before boarding!

Airlines have yet to come up with a more efficient way of boarding, so in the meantime, hurry and get out of the way to let others reach their seats!

3. Don’t party on the plane

A problem perhaps found more often on planes heading to sunny leisure destinations (particularly towards cheap all-inclusive destinations, apparently), but being loud and bothering everyone during the flight is always completely unacceptable. It’s okay to have fun and to make the flight more enjoyable between friends or family, but stay civilized and think about the other passengers on board!

If you want to make yourself at home, save up some money and pay a trip in a private jet, this way you can truly do whatever you want. In the meantime, all others aboard have a right to a calm and quiet flight! Addition following reader comments: excessive moving and sitting in the aisle to chat with your friends is also annoying.

This one shouldn’t even need an explanation. I will never understand how someone could think that it is a good idea to buy extremely smelly food in the airport terminal and then wait to be in a super-narrow enclosed metal tube with 200 other people with barely any ventilation to eat it. Other addition: same thing for perfumes!

Sometimes, you might not realize that your tablet, by being attached to the seat in front of you, can be bothersome for the person in front. Until you spend a four-hour flight with someone constantly kicking and moving your seat from behind.

Special note to parents: I empathize and I am sure it must be complicated to travel with a kid. But the bare minimum that should be respected at any time is to stop said kids from constantly kicking the seat in front for four hours. Some would even say if you can’t manage that, maybe traveling isn’t the best idea.

6. Middle armrests are both for the middle seat

Not many travellers know about this rule that frequent fliers swear by. Unfortunately, it’s true. Experienced travellers agree on this super important etiquette rule, and the only people who don’t respect it are apparently those who do not take the plane often. It is very straightforward: the person who has the middle seat gets both armrests, period.

The passenger next to the aisle gets the extra space on one side, the window passenger can rest his head, so leave the armrests to the passenger in the middle. I understand that if you didn’t know this, you might have been breaking this rule, that’s fine. Now that you know, stop! By the way, I would be the first to prefer if this rule wouldn’t exist, because I have a window or aisle seat on 98% of my flights and I would love to have an additional armrest. But it is the minimal amount of respect that you can give to the middle passenger, as middle seats suck.

7. Be mindful when lowering your seat

Ideally, in my opinion, no one should lower their seat on a plane, at least during short flights. It’s so annoying for the person behind that I don’t understand why more people don’t see it that way! But anyways, I am well aware that a lot of people care much more about themselves than the passenger behind them and want to lower their seat.

If you do it, at least try not to move it all the way down or to not keep it down for the whole flight. Above all, do not wiggle the seat (voluntarily or not) in a way that makes the whole thing move all the time because nothing is more unpleasant!

For many years now, a “zone number” has been printed on your ticket. When the boarding time comes, the employees will call the zones in order and you must get in line only when your zone is called. Many people yet again slow down the process by entering the queue at the wrong time, and at the counter, the employee must take the time to explain that it’s not their turn and they must go all the way back.

In short, it slows down everybody. Listen too. Prior to boarding, sometimes gate agents will tell you that you only need your ticket, no passport. Then but away your passport and stop slowing everything down! The opposite is true, if they don’t mention it, you probably need it. So be ready and have it out.

9. Do not move luggage that is not yours

Under no circumstances is it acceptable to move a piece of luggage to another compartment. Let’s be clear: you can move it to maximize space within that same bin. That is not a problem. I’ve seen many times people taking someone else’s bag and putting it three compartments away to take its place.

First-come, first-serve. It’s not other people’s problem if you have no room for your bag, so get your hands off someone else’s stuff. Furthermore, there’s a reason why boarding is done by zones: so that people who paid more have access to the best spots to put their carry-on luggage. They paid for it, so don’t move their things.

10. Wait for your turn when deplaning

In my opinion, this is by far the worst behaviour. Everybody wants to get off fast, obviously. Your time is not worth more than mine, nor is it worth more than the time of anyone else on the plane. If you think otherwise: pay for a first class ticket, you’ll be the first to get out and you’ll deserve it.

Until then, wait for your turn. It is a very simple process: one row at a time, one passenger after another. You should never pass in front of someone in the row before you, unless they really don’t want to get up and prefer to wait until the end to get out. Make sure that it is clearly the case (they stay seated, they make a sign, etc.).

BONUS: Do not clap your hands after landing

And since at Flytrippers, we like to give you more for your money, here is one last bonus behavior to avoid.

This one is more an opinion than a rule I believe. I always find it weird when people start applauding after landing. Unless a turbulent or problematic situation happened (which occurs on less than 0.01% of flights) or that the weather was particularly bad, there is absolutely no reason to congratulate the pilot for doing the job that he’s paid to do.

More than 100,000 flights land every day, so there is really nothing special to applaud. On the other hand, if it is to show some respect and appreciation to the pilots that do such a unique job, it is by far less annoying than all the other behaviors above. I would however be really curious to know what pilots think about this, so if you know one, tell them to leave a comment below!

Now that you know these airplane etiquette basics, you can be sure nobody will look at you with mean eyes when you fly, even if you are not an experienced traveler. Flying can already be such a bad experience sometimes, don’t make it worse by doing one of those things.

Have you ever seen worse behaviors? Tell us in the comment below!