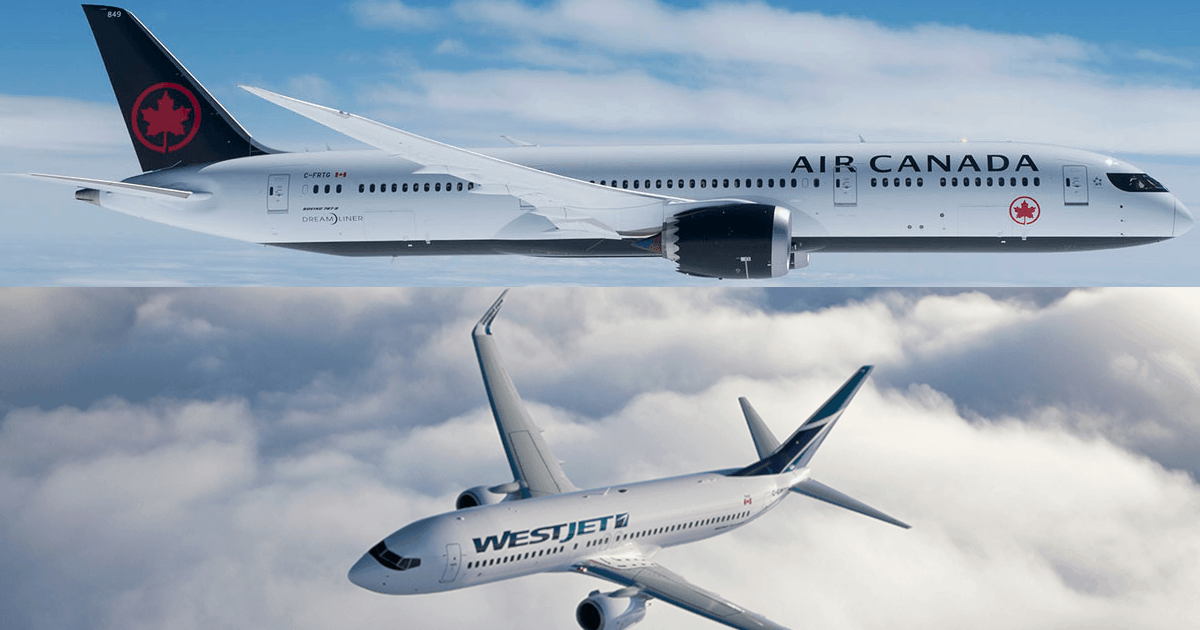 There are two main airlines in Canada, and each one has its (very) loyal customers. But which one is the best?

If you follow our flight deals page, you’ve probably noticed that we feature more deals from WestJet than Air Canada. Indeed, great significantly-lower-than-regular-price fares from Toronto, Montreal and other Canadian cities are more frequent on the teal airline. So, if Air Canada doesn’t offer as many discounts, does that mean the flight experience is worth more, or not necessarily?

It all depends on your point of view. And your priorities. And which aspects of flying you feel are more important. It’s a hotly contested debate: a lot of people prefer WestJet while many would only ever consider Air Canada. Who is right?
(By the way, we absolutely want your opinion on the matter in the comments below)

One thing is for sure, both airlines compete ferociously against one another. Just in the past weeks, both annnounced increased bag fees at the same time (and yes, it’s a good thing that they increase these bag fees that are optional, rather than the actual fares that aren’t optional). Before that, when Air Canada announced a Basic Econonomy fare class, WestJet followed suit pretty quickly too.

So first of all, here’s a quick overview of each company, in case you are not familiar with these two great rivals.

The flag-carrier of Canada (if you’re not familiar with the term, essentially it applies to the airline that ‘represents’ Canada abroad), Air Canada is the country’s largest airline. It is the one that flies the most passengers (45 million), that serves the most destinations, that owns the most planes, etc.

In other words, Air Canada is a legacy carrier, which means it is an airline with the most history, the most prestige. It is also our only national full-service carrier, a term that applies to airlines that, as opposed to low-cost or ultra low-cost carriers, differentiate with a more complete service offering. Air Canada’s positioning is quite clear: the high-end of the airline market.

WestJet is Canada’s only other truly national airline, with a growing network from coast to coast. Launched in 1996 under the low-cost model (but not ultra low-cost, there’s quite a difference), the company now has a presence in all major Canadian markets, and flies approximately half the number of passenger that Air Canada does (22 million).

It has been clear for some time to all those observing the Canadian aviatuon industry that WestJet aims to become an international airline and continue to grow and compete with Air Canada. Already offering many routes in North America and the Caribbean, and even a few in Europe, WestJet recently ordered brand-new Boeing 787 Dreamliners. These aircrafts will allow WestJet to reach many new destinations much further away.

There are obviously other Canadian airlines, of course. However, they are mostly regional players and none of them compete across the board with Air Canada and WestJet. That being said, don’t miss a blogpost coming soon with an overview of all Canadian airlines, including foreign airlines that serve the North American market.

So if Air Canada is higher-end, it’s the best airline right?

Well, it’s not that simple. It depends on many factors. What you must know is that a company’s chosen value proposition and price positioning… does not necessarily guarantee a better flight experience.

Just to give an example, in the US, there are three large full-service, national airlines who occupy the higher-end of the spectrum (American, Delta and United)… and they consistently trail their low-cost rivals (Southwest and JetBlue) in customer satisfaction. It has been this way for years.

I would bet that if you were to ask WestJet, they would say the same is true in Canada. And at least in terms of customer satisfaction, one recent major study would seem to support that: the 2018 TripAdvisor Traveller’s Choice Awards named WestJet one of the world’s best airlines, while Air Canada was noticeably absent from the ranking.

So it’s settled then! WestJet is the best airline?

Not so fast. As I said, it is more complicated than that. You see, despite the TripAdvisor ranking, the world’s foremost authority in airline rankings, SkyTrax, just released its own 2018 ranking, also based on customer feedback.

It all comes back to one my first points in this article: everything depends on your own perspective and what you focus on. Just to make things harder to comprehend, another 2017 study by JD Power ranked WestJet second-to-last amongst North American low-cost airlines… and Air Canada last in its own category in North America.

So like any subjective ranking, it’s definitely not cut-and-dry. Survey methodologies can differ greatly – surveyed audiences as well. The phrasing of questions and even the order in which they are laid out can influence results. And remember, these surveys are open to everyone. Best airline or favourite airline? It’s all pretty confusing.

So here are a few things that could explain this if you are interested: SkyTrax has a very well-established reputation regarding airlines, while TripAdvisor is a less-specialized general travel ressource website. SkyTrax respondents might have been skewed more towards the aviation enthusiast crowd, people very passionate about air travel, with more refined tastes and for whom prestige and standing is more important. They might have given more importance to more ‘corporate’ and organizational criteria, as opposed to TripAdvisor users, who could be more focused on the tangible everyday flight experience.

Those users who placed WestJet first are probably not aviation aficionados but more grounded, practical, maybe more casual fliers. Some of WestJet’s strengths (its staff’s likeability, friendly service and younger, fun brand identity) would likely be much more important to TripAdvisor users.

But this is all pure speculation: it is extremely difficult to explain these wide discrepancies and say with some level of certainty that one airline is better than the other…

Okay, I know you want me to give you my own personal opinion! But I do have one confession: I have actually only tried WestJet a couple of times, with most flights on short flights operated by WestJet Encore (on smaller regional airplanes).

So even with nearly 200 lifetime flights, I down have the biggest sample size with WestJet. Just to be clear, I’m definitely not boycotting them or anything, I just honestly never really had an occasion. I don’t fly within Canada that often and WestJet doesn’t have an expansive international network (yet).

But that being said, as the co-founder of Flytrippers, you won’t be surprised to hear that my number one criterion for flights is the price. So personally, I don’t fly Air Canada that often either. The fact is, based on my personal experience (and months of flight price data here at Flytrippers), Air Canada is almost always systematically more expensive.

I won’t say that they never have the lowest price, that’s not true. But generally, yes it is more expensive. The same is true not only to the US and internationally, but within Canada as well when compared to WestJet.

So the real question is: is the difference in price worth it? In my own personal experience, with dozens of flights on Air Canada, United, Delta, American, Southwest, JetBlue, defunct legacy airlines like Continental, Northwest, US Airways AND even ultra low-cost carriers… the in-flight experience in economy class is extremely similar on all airlines.

Maybe it shouldn’t be that way, and maybe that’s why Asian and Middle-Eastern airlines dominate world rankings. But as it is here, there is frankly very little difference.

So paying more to choose one airline over another? Personally, all other things being equal, I have never paid more money simply to be one a specific airline. And I don’t plan on doing so either. The in-flight experience simply isn’t different enough for me to do so, but this is a very personal thing.

Have I enjoyed and had good experiences on my 30+ flights with Air Canada (including at least a dozen in the past two years)? Yes, sure. Nothing negative to say honestly (except pricing wise). But it was nothing exceptional that would make me want to pay extra to fly with them, in my own opinion. And though like I said I’m looking forward to flying WestJet, I think I will say the same thing afterwards.

Flytrippers co-founder Kevin has also tried both himself, and he agrees: the in-flight experience is quite similar!

By the wat, if you are looking to buy a flight, remember than in addition to our daily deals, we also have a page with our favourite flight search tools that will find the cheapest price for all your flights, so you’ll easily see which airline is the cheapest.

Maybe in your case, it’s worth paying more in specific instances. Many factors can justify choosing Air Canada even if WestJet is cheaper (or WestJet when Air Canada is cheaper): direct flights, more destinations, more schedule options, earning frequent flier miles, etc. It’s up to you to evaluate any given situation and decide if certain advantages are worth paying for!

So what do you think? Tell us which airline is YOUR favourite – and why!