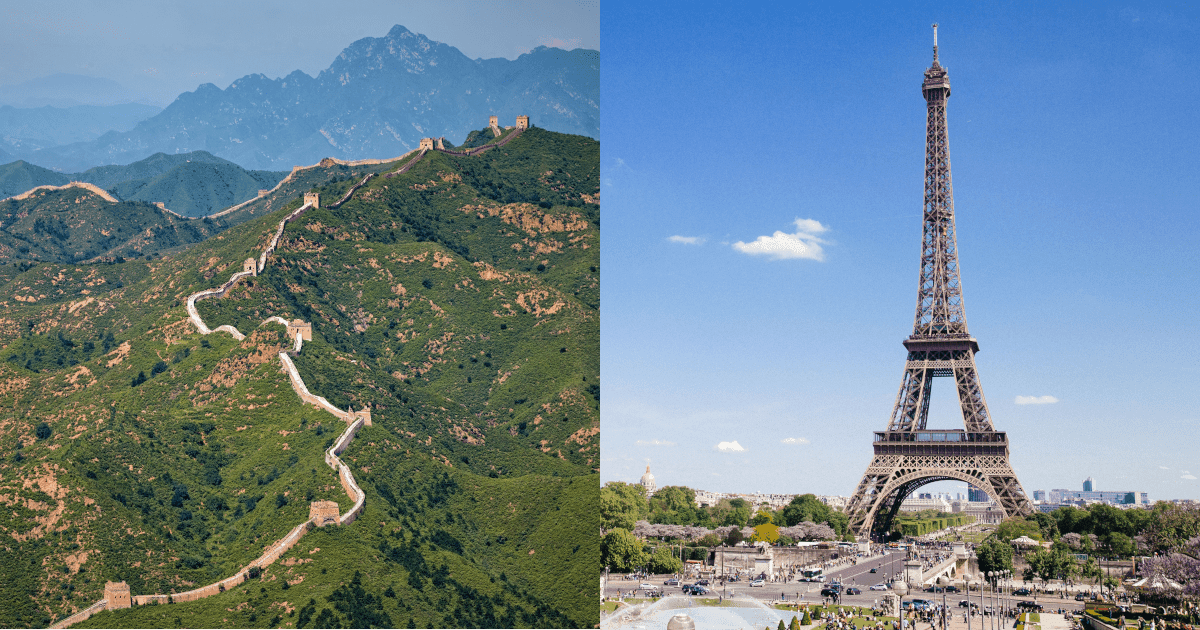 Without further ado, here is the answer: France. Even though there are many countries around the world spanning over large areas, only 23 of the world’s ≈ 200 countries have more than one time zone. Yes, only 23. And the nation with the most is a bit surprising.

By the way, since many now have a lot more free time, and since the best way to become better humans is spending time more time learning than being entertained… we’d love for you to tell us your suggestion for our next Flytrippers travel quiz question.

Leave a comment with your favorite travel/geography/world fun fact that we could use and share to other travelers. That way we can all learn about our planet without even leaving home!

Why France Is The Country With The Most Time Zones

Seems odd, doesn’t it? France doesn’t even cover the 15 longitudinal degrees that usually represent a single time zone. But France it is!

In theory, if each zone were just one hour apart and were set according to distances only, that would make a nice round 24: there should be just 24 zones of 15 degrees each (360 degrees divided by 24 hours).

But time zones were adapted to follow regional and national borders for convenience. That has created quite a few quirks on the time zones map.

Believe it or not, there are more than 24 time zones in the world. Thanks to slight complications like 30-minute (and even 45-minute) time differences, as well as the International Date Line, there are closer to 30 time zones.

This colored map shows them well:

But now, let’s look at how and why France covers the most time zones.

Well, it’s a bit of a technicality. France still has several territories scattered around the world, many of which we’ll be sharing in our current series about French-speaking countries to visit. It’s the same reason our other France-related quiz previously had surprised many of you, as you’ll see below.

Altogether, France covers 12 different time zones—ranging from UTC -10 to UTC -12. More than any other country. Some sources say they have 13 or 14 (probably a daylight saving time issue), but at least everyone agrees that France is #1.

It seems like the old saying about Great Britain being “the empire on which the sun never sets” hasn’t been revised in a long time, right?

How Many Time Zones Does China Have?

China has only one time zone. That’s right, one.

And it’s not because we are referring to the Republic of China (Taiwan) in our Facebook poll: we were really talking about China (the PRC), it wasn’t that type of trick question.


This is where things get strange. While China is indeed the world’s third-largest country by total area, covering a staggering 9.6 million square kilometers, it runs on only one official time zone.

This means that while Beijing wakes up and witnesses the sunrise at 6:30 am, the poor people of Xinjiang in the west have to wait roughly three more hours for the sun to rise past 10:00 am.

While China should have 5 time zones based on its size, the one-time-zone policy was introduced in 1949 as a step towards “national unity.” While some may see this decision as a minor inconvenience, others find the one time zone highly impractical and unnecessary.

This also creates the biggest official change of clocks of any land border in the world. If you were to enter China from Afghanistan, you would experience an immediate 3.5-hour difference by taking just one step—a time change that usually only happens after a long flight!

While it would be cool to experience, that border doesn’t have any roads and is in a rugged area, so I doubt any of us will ever go from 2:30 pm to 6:00 pm instantly. Only a handful of people have been there in history, which is a fact that I find fascinating (maybe because I love off-the-beaten-path destinations and hate overcrowded touristy spots).

Which Country Is Second?

It’s tied between Russia and the USA.

Russia is the largest country in the world, and has the most contiguous time zones (successive time zones that touch each other, without territories). Russia covers from Eastern Europe to Northeast Asia, and there are 11 different time zones spanning from UTC -2 to UTC -12.

The USA also shares second place with 11 time zones, but these include faraway overseas territories like Guam and American Samoa. The US time zones range from UTC -12 to UTC +12.

Since you are all travelers, that means you are quite curious intellectually, as that’s one of the best reasons to travel: to learn more about our world.

So tell us your fun fact or stat about travel/geography/different cultures/the world in general that we could turn into a question for our next quiz. We’d love to read your submissions!

Here are the ones we already published:

Do you want more travel content in your inbox?

Thanks to its overseas territories, France is the country with the most time zones. Russia and the USA come in second place, though the former has all of its time zones on the mainland, not relying on any territories. And finally, China, somehow has only one time zone, despite it being a massive country.

Did you guess right on our Facebook poll? Do you have a submission for our next quiz? Tell us in the comments below!


Advertiser Disclosure: Flytrippers receives a commission on links featured in this blog post. We appreciate if you use them, especially given it never costs you anything more to do so, and we thank you for supporting the site and making it possible for us to keep finding the best travel deals and content for you. In the interest of transparency, know that we will NEVER recommend a product or service we do not believe in or that we do not use ourselves, as our reputation and credibility is worth far more than any commission. This principle is an essential and non-negotiable part of all our partnerships: we will never give any third-party any control whatsoever on our content. For more information on our advertiser disclosure, click here.

Which Island Has More Inhabitants: Manhattan Or Montreal?

Spain or Brazil: Which Country Does France Share Its Longest Border With?