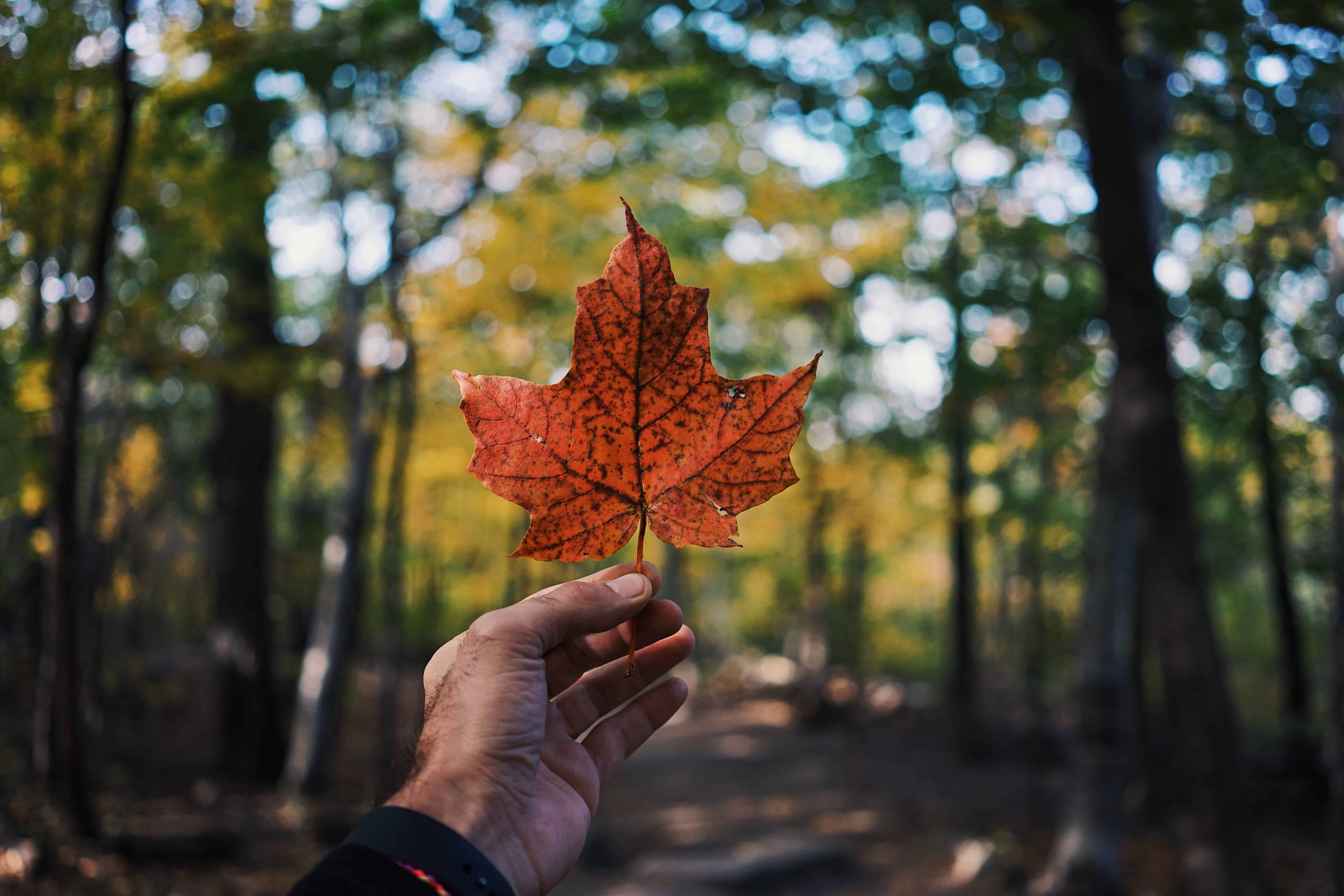 Has the situation changed a bit in terms of traveler numbers in Canada? Many of you seemed to think that the 97% drop in passenger numbers we shared last month wasn’t enough, but the fact is seeing a trillion-dollar industry (1,000 billion dollars) in a shambles like this all over the world almost overnight really makes these numbers astounding.

I won’t repeat everything I already wrote: about a month ago, we shared data about how many people were traveling in Canada compared to the same day the previous year (with an infographic as well). All the details are there.

We wanted to update these numbers and the infographic to see if things have changed here in Canada, because there has been a very slight uptick in air travel the US as you might have seen in yesterday’s post about how many people are traveling in the USA.

In Canada, we also have data for international arrivals, but let’s first look at departing passengers since that’s all we have in the US for the comparison.

Here are the numbers provided by CATSA for the past 7 days: 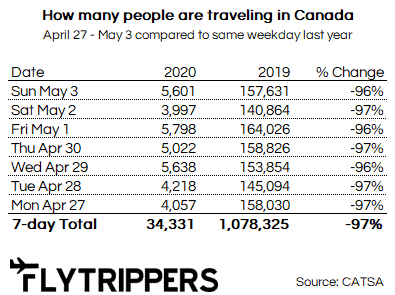 This is how many departing travelers where screened in Canada’s 8 largest airports (that represented 82% of total passenger volume) by the Canadian Air Transport Security Authority (CATSA), who is in charge of airport security checks.

For quick reference, these were the numbers in early April: 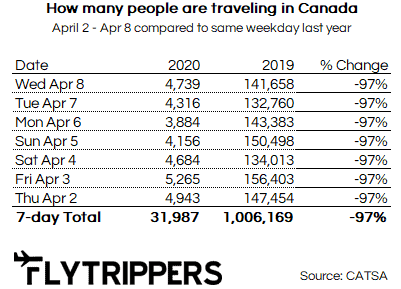 Essentially, nothing has changed in Canada. Still 97% less than last year, exactly like it was a month ago.

As you can see, the slight increase we’ve seen in the US in the past days has not happened in Canada at all. Anecdotally, it seems many are under the impression that Americans aren’t following stay-at-home orders as much as we are in Canada, so this is one data point that could illustrate the phenomenon.

Here is a comparison of the evolution of the situation in both countries:

While the number of flights isn’t really representative (since many planes in the US are flying nearly empty because of the government as explained yesterday), we can see that the Canadian airspace does not seem quite as busy…

But it never is anyway, given the huge gap in population and flights. So it’s hard to draw a credible conclusion from images like this (even world maps are very misleading after all).

Here are the numbers provided by CBSA for the most recent full 7-day period:

Down 99% for US arrivals and down 98% for non-US international arrivals.

With more routes continuing to be cut (for example, Air Canada has stopped flying to the US altogether—something that hasn’t happened since the 1940s), it’s not very surprising to see that numbers are still decreasing.

By the way, all those Canada-US flights canceled means you are now definitely eligible for a full cash refund, despite what airlines are telling you—we’ll very soon have a lot of help for refunds for our newsletter subscribers, sign up for free now.

Finally, here are the numbers for those arriving by land:

In April, non-truck drivers were down 95%, so it has decreased a bit more, to 96%. Of course, the border is closed to non-essential travel, but as we explained in one of our very first articles on the coronavirus pandemic, border closures never apply to citizens.

This is a concept that many have a hard time wrapping their head around: many wrongfully feared that the closed borders would keep them from returning, but that was never the case. The risk, as we said, was flights being canceled and then being stranded abroad, not the Canadian border itself.

But that risk doesn’t exist in the US since you always have the possibility of coming back overland. Anyway, with most snowbirds having returned relatively quickly, it’s not surprising that the decrease has continued as well.

The border closure between Canada and the US has been extended to May 21st, and some speculate that there is a non-zero chance that it won’t be extended.

Although with the US now well over 1.2 million confirmed cases (around 33% of worldwide cases), it is unlikely, but who knows what will happen. That is in 2 weeks, and we’ve all seen how a lot can change in such a short time span since the beginning of this pandemic.

We’ll let you know as soon as something is announced.

Want to get more coverage of the coronavirus’ impact on travelers?

Here are the latest numbers in a new infographic to share (you can also see a new one that compares Canada and the USA):

While the US has seen slight increases recently, the drop in Canada’s passenger numbers has not changed since last month.

What do you think of these numbers? Tell us in the comments below.

Ontario & Quebec: Mandatory Vaccines For Travel (And Other Activities)?