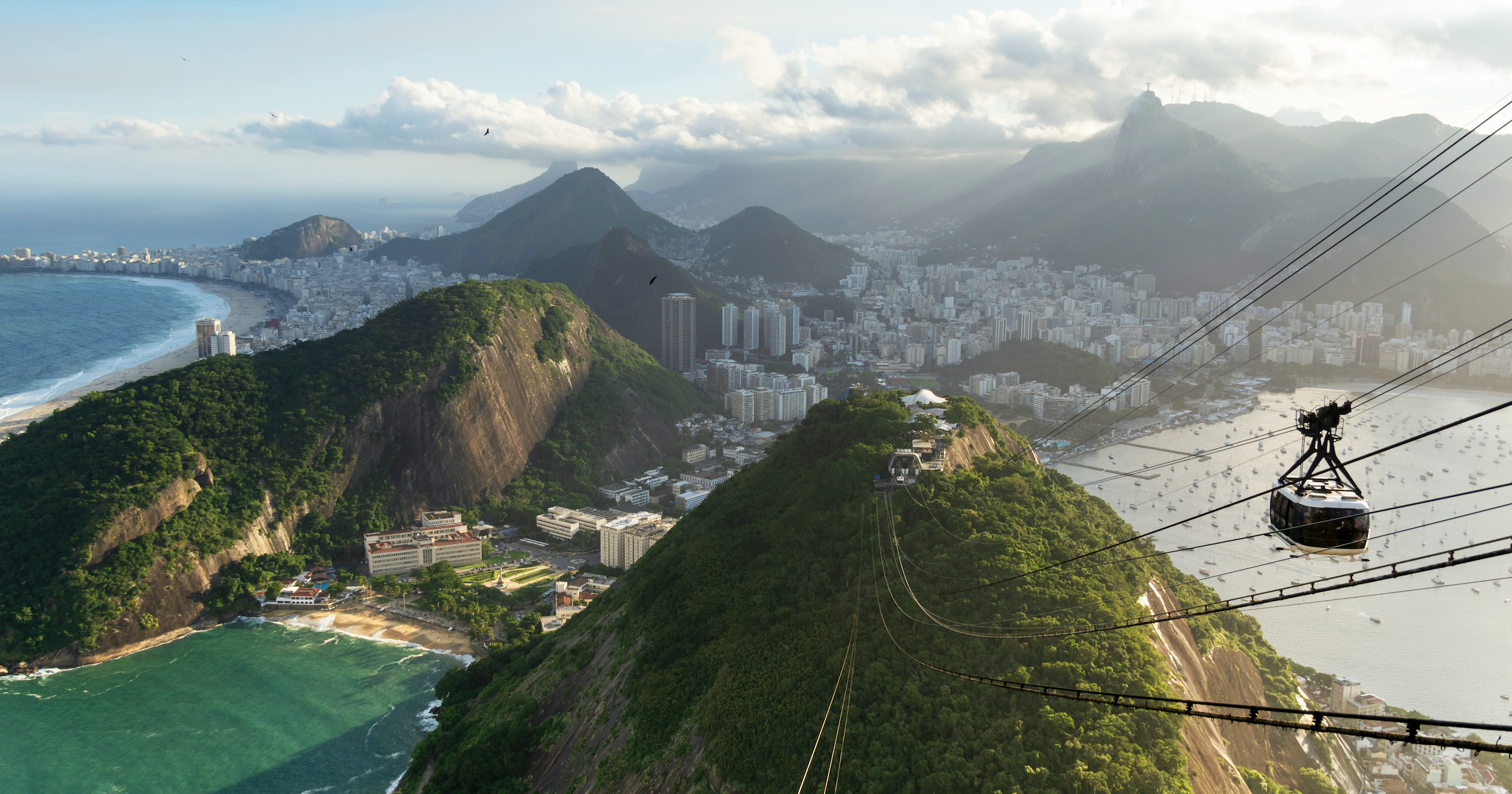 It’s impossible to hear about Brazil and not immediately think of one of its most popular cities, Rio de Janeiro. But as someone who’s lived there for the last 10 years (give or take a few traveling breaks 😉), I figured I could tell you a little about this amazing city.

No pandemic restrictions have been reinstated in Brazil since my last post on my favorite lesser-known Brazilian destinations (so there is no requirement for vaccinated Canadians).

So, here’s the good news: there’s still time to escape winter and plan a fun getaway to a city that simply knows how to do summer, Rio de Janeiro. Remember, summer’s just about to start here!

Flytrippers is here to help you spot good deals, and make sure to subscribe to our free newsletter to get those directly by email.

Rio is mostly known for its sunny beaches and welcoming people, but I can tell you right now that it’s not all there is to the Cidade Maravilhosa (“Wonderful City,” in English), as the locals call it. With that in mind, here are some of my favorite activities you can do when visiting and the spots you definitely can’t miss.

I’ll go ahead and start with this famous Brazilian postcard-worthy place.

After all, you can’t visit Rio and not go up to the Christ the Redeemer statue (Cristo Redentor, in Portuguese). Built in 1931, the Redeemer celebrated its 90th anniversary in 2021, and it was named 1 of the 7 modern wonders of the world in 2007.

You’ll surely be able to see it since the statue can be spotted from most places around the city center, but going up there is a whole different experience.

There are many ways to go up Corcovado Mountain (where the statue is located): option 1 would be the official train which costs about R$100 (≈ C$28) roundtrip; option 2 is taking one of the many tourist vans that leave 3 neighborhoods every day (Copacabana, Largo do Machado, or Paineiras) for about R$90 (≈ C$24) roundtrip.

You can also get a taxi or Uber as far as possible and walk the rest of the way there, but if you’re not used to physical activity, I wouldn’t recommend it. It’s only about 10 minutes of walking, but it’s really uphill (we are talking about a mountain here) and trust me, Rio’s weather is not forgiving.

Train tickets are more popular (and my personal recommendation) since that’s the traditional way up, and the view is amazing. If that’s your route of choice, be sure to plan ahead and get your tickets beforehand.

Once you’re up there, you’ll be shocked by the view of the entire city; it’s seriously breathtaking.

If that’s your thing, there’s even a little chapel under the statue where you can say your prayers. It’s also sure to be packed with tourists, and you might struggle to get a nice pic without someone else in the frame, but hey, it’s worth it.

Since we’re on the topic of popular destinations, this one takes the immediate 2nd spot. The Sugarloaf Mountain (Pão de Açúcar, in Portuguese) stands 395 meters above the water, and you can go up there on the cableway for another incredible view of the city.

Tickets start at R$150 (≈ C$40), and since the mountain is made out of 2 separate peaks, you can go up there in 2 stages by cable car. You’ll first arrive at Urca Hill — at an altitude of 220 meters — and then continue on to the top of Sugarloaf Mountain.

If you’re feeling adventurous, you can also hike up there; more details about this in the 2nd part of this post coming shortly, so stay tuned!

Located in its namesake neighborhood, the Rio de Janeiro Botanical Garden (Jardim Botânico, in Portuguese) was founded in 1808 with the goal of assimilating spices from the East to Brazil’s weather. Nowadays, the Garden is a destination of major scientific importance and very popular among tourists for the beauty of its landscapes.

You can walk around it on foot or rent an electric cart to see plants of all kinds and from all over the world. And if plants aren’t really your thing, it’s still a good spot to visit considering how peaceful a walk at the Botanical Garden feels. It’s definitely a nice break from the general whirlwind of the city.

There are many guided tours offered by locals, but you can also visit independently. Since the place is really huge, tickets are often available at variable costs — the most basic entrance fee is R$67 (≈ C$17). I’d recommend keeping an eye out for that if you’re planning on going on a weekend though, that’s when the Garden gets most of its visitors.

Located a few meters from the Botanical Garden, at the foot of Corcovado Mountain (yes, the one with the Redeemer, told you it was everywhere), Parque Lage is one of Rio’s most beautiful public parks.

Beyond its gardens, in Parque Lage, you can also wander around incredible architectural feats. This used to be the residence of a local industrialist but was remodeled by Italian architect Mario Vodret in the 1920s. Nowadays, it stands as a historical and cultural heritage site for the city of Rio de Janeiro, according to the National Historical and Artistic Heritage Institute (IPHAN).

Parque Lage is also home to the School of Visual Arts, an institution that offers many courses and even free activities to encourage the study of visual arts. Check out their website before you visit. Who knows, you might be able to take a free course or enjoy one of the school’s many public events!

Rio de Janeiro has a fair number of beaches, but none are as internationally famous as the coastline of Leme, Copacabana, and Ipanema.

The Boardwalk of Copacabana (Calçadão de Copacabana, in Portuguese) is a promenade made of black and white Portuguese stones that stretches along the beaches in the Leme and Copacabana neighborhoods. Its famous wave-like layout, known as mar largo (“wide sea,” in English), was created in 1906 as a way to pay homage to the city’s Portuguese cultural heritage.

Some 50 years later, the Boardwalk of Ipanema (Calçadão de Ipanema, in Portuguese) came along with a slightly different design but made with the same material.

You can now see all 3 neighborhoods/beaches simply by either biking or walking the approximate 7 kilometers of the joined promenades.

Aside from the fantastic scenery and lovely beach atmosphere, you’ll also be walking by a lot of famous Rio de Janeiro spots, including:

I believe it to be common knowledge that Brazilians can be slightly obsessed with soccer — of course, you’ll meet exceptions, but it is truly a national passion.

So why not watch a fun soccer match at Brazil’s largest stadium, the Journalist Mário Filho Stadium, known as the Maracanã?

I really wouldn’t recommend attending a final or any of the big teams’ matches if crowds are not your thing — honestly, it can get pretty rowdy. Luckily, there are often calmer, less popular matches held in the stadium, and even if you don’t feel like watching one, you can still visit the Maracanã during a very informative tour.

Like with the Calçadão, you’ll get to see a whole lot of interesting spots here.

Rio’s city center is sort of an Old Town. It’s not common to use the term around here, but that’s as close as I can describe the general atmosphere you’ll get by walking its streets.

Lapa is one of its first neighborhoods: known for its buzzing nightlife, it’s also home to the Metropolitan Cathedral of Saint Sebastian and the Selarón Steps (Escadaria Selarón, in Portuguese). You can also take the train that goes over the Carioca Aqueduct, known as the Lapa Arches (Arcos da Lapa, in Portuguese), to reach the historic neighborhood of Santa Teresa.

A bit further ahead, at the Floriano Peixoto Square (or Cinelândia, as the locals call it), you’ll get to see the Rio de Janeiro Municipal Theater, where you can either buy a ticket to watch one of the many performances or just appreciate it for the architectural achievement that it is.

You’ll also be near the National Museum of Fine Arts and the Amarelinho Bar — a traditional Rio restaurant dating back to 1921, known for its feijoada (a very popular Brazilian dish made with black beans and pork meat) and cold beer.

Take the VLT city train for R$4 (≈ C$1) or the subway to reach the Uruguaiana station. Along its stone pavements, you’ll see many general stores. Locals call this region the Polo Saara since it’s the abbreviation used by the local business board.

Again, you have the opportunity to taste breakfast or tea the Brazilian way at Rio’s most traditional confectionery, Colombo. Yes, the same one I mentioned earlier. This is actually their original location which opened in 1894 and has been very well maintained since then — you’ll be surprised by how gorgeous the place is.

Finally, just across the street from one of the Federal University of Rio de Janeiro’s many campuses — and a bit hidden from the general public — is one of my favorite spots in the entire world.

Yes, I stand by that! It’s the Royal Portuguese Cabinet of Reading (Real Gabinete Português de Leitura, in Portuguese).

Founded in 1837, the institution holds the largest collection of Portuguese literature outside of Portugal and was elected many times as one of the most beautiful libraries in the world. It’s breathtaking and actually still relatively unknown (even to locals!), but so worth the visit. Better yet, there is no entrance fee!

These were the first 6 items on my top 12 list of things to do in Rio de Janeiro as a local. Feeling inspired yet? Just wait until you read about the rest of my favorite spots and activities, and you’ll be dreaming of visiting Rio for the summer!

What would you like to know about Rio de Janeiro? Tell us in the comments below.

Indira is a remote executive assistant at Flytrippers. She is a Brazilian journalist with a passion for traveling - with a lot of experience especially when it comes to traveling on a really low budget. She's been to 30+ countries and is aiming to expand that list soon!