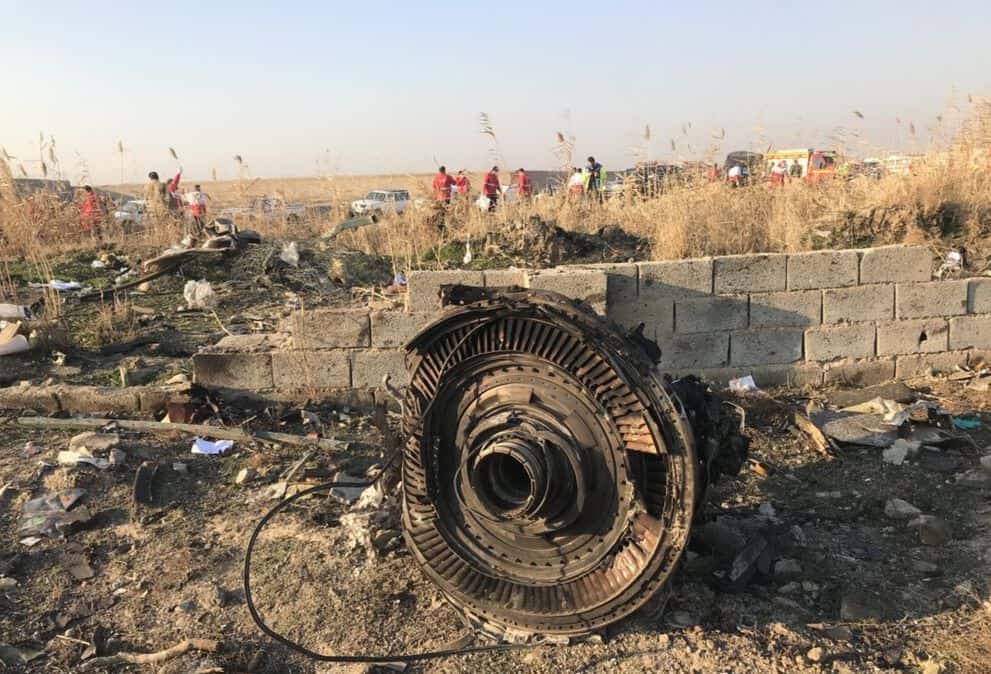 A Ukraine International Airlines plane crashed minutes after takeoff in Iran yesterday, and unfortunately, no one survived the accident. What is most puzzling about the crash is the circumstances, and more specifically, the mystery around what could have happened.

With Iran having launched missile strikes on US targets in Iraq just hours before, and conflicting initial reports about the cause of the crash, it is a very unusual tragedy.

12 PM update: many US media outlets are now reporting that US officials believe a missile has indeed mistakenly took down the plane.

January 10 update: Iran has admitted to shooting down the plane “unintentionally.”

In a few lines on 5 main points, here is what we know up to now and a few useful information so you can better understand the situation. I’ll go into each point in more detail below.

Flight PS752 was from Tehran to Kyiv, with 176 people on board, including 63 Canadians (and 138 of the 167 passengers were traveling to Canada). At 8,000 feet, less than 3 minutes after a takeoff that went normally, it completely and abruptly stopped transmitting and crashed.

The flight data suggests a “catastrophic” event mid-air. The plane was apparently on fire before hitting the ground, and Ukrainian authorities walked back their initial statements about a technical issue. They are now refusing to speculate about the cause.

Unless you’ve been hiding under a rock these past few days, you know that there has been quite an escalation in US-Iran tensions this week. Many are speculating that the plane could have been shot down, which as you can imagine, would be a pretty big deal.

Iran denies this, and they say it was an engine problem (without offering any proof.) To make matters worse, Iran seems to be refusing to collaborate with the US authorities or send them the black boxes. Usually, investigations involve the authority that certified a plane model, in this case the US, since it was a Boeing 737 (not a 737 MAX.)

Okay, I know it can be confusing for non-aviation fans—and it doesn’t help that some media outlets don’t seem to get this either, or want to be clickbaity by linking to the 737 MAX saga—but the 737 and the 737 MAX are two completely different aircraft.

Ukraine International Airlines (or UIA) is Ukraine’s flag carrier, and a legacy, full-service airline: this wasn’t a bush airplane. The aircraft was delivered in 2016, which is very recent for a plane, and most importantly UIA never had a crash since it began operations in 1992.

We took 2 UIA flights in 2017 (on Boeing 737-800s), and it was a top-notch experience, definitely not a sketchy unsafe airline. I’ll share pics below.

As a reminder, flying is exponentially safer than all other modes of transportation, especially driving. It’s worth repeating, because yes, crashes are horrific and terrible tragedies, but over 100,000 flights operate every single day, and crashes are thankfully extremely few and far between.

There is absolutely no need to worry: go and explore our world.

Contents hide
The Accident
The US-Iran Conflict
The Aircraft
The Airline
The Safety Stats
Summary
Share this post to help us help more people travel more for less:

Only minutes after takeoff from Tehran Imam Khomeini Airport (IKA)—one of 2 airports serving the Iranian capital—Ukraine International Airlines Flight 752 crashed to the ground, at around 6:20 in the morning local time. The aircraft’s destination was the Ukrainian capital Kyiv (KBP), with 176 people on board (167 passengers and 9 crew.)

No one survived the accident. Our thoughts are with the many people affected by the tragic loss of their loved ones.

There were 82 Iranians on board, 63 Canadians, 11 Ukrainians, 10 Swedes, 3 Germans, and 3 Britons. The 9-person crew consisted of Ukrainians. Since 138 passengers were continuing on to Canada, the number of Canadians could actually be higher: Iran doesn’t recognize dual citizenship, so Canadian-Iranian dual citizens could possibly be counted among the 82 Iranians.

Eyewitnesses described seeing the plane burning in the sky. It crashed in an area northwest of the airport and exploded when it hit the ground.

The cause of the accident remains unclear.

Some experts fear the plane might have been hit by a missile. Ironically, the last time a commercial airliner was shot down was in Ukraine in 2014, during the Crimean crisis (although it was a Malaysia Airlines plane that was just flying over the country.)

Ukrainian authorities first reported the plane had technical issues, but then retracted the statement.

An “uncontained” engine failure is another theory, one that could explain the sudden disappearance from radar screens.

US regulators banned US aircraft from flying in Iranian and Iraqi airspace, and Air Canada will also be modifying flight routes as a precaution.

We will follow the situation for you and hopefully learn more in the coming weeks and months.

Like those who say “PIN Number” (“personal identification number number”). In case you’re interested, this is called the “RAS syndrome.” Or “Redundant Acronym Syndrome syndrome.” See what they did there? Even its own name is witty.

And another side note while we’re at it, this time about Kyiv. As a principle, I prefer to write the name of a city (r country) the way the locals say it should be written. You know, since it’s their city. They say it’s Kyiv, not Kiev… so it’s Kyiv.

Now, back to the sad topic.

The timing of the crash is extremely suspicious to many, as it happened just hours after Iran fired missiles at US bases across the border in Iraq, a worrisome escalation following the US attack that killed an Iranian general.

Some even note that it is strange that the plane is a Ukrainian one, given the role that the country has played in the impeachment proceedings against President Trump. An impeachment that many commentators say Trump is attempting to distract from with the Iran situation. But if the plane was shot down, it is more likely to have been an error.

Whether or not you believe this crash is an odd coincidence and that the speculation is a conspiracy theory, there’s no denying the political situation is already making this crash unusual: Iran has made it clear that they do not intend to hand over the plane’s black boxes to the US, which is significant because that’s usually the process.

Since the plane involved was manufactured in the US, American authorities should be involved, even though Iran is responsible for the investigation. It seems unlikely to happen, so it’ll be interesting to see how this affects the outcome.

The Ukrainian President Volodymyr Zelensky announced that they would send a group of experts to Iran. The Prime Minister of Canada, Justin Trudeau, also responded to the accident. He announced that Canada would cooperate with international partners to ensure a thorough investigation.

Both pilots were experienced and had around 12,000 hours flying on the 737. The plane had taken off with a one-hour delay; it’s still unclear why.

The plane that crashed was a Boeing 737-800 that had been delivered in 2016 and had just gone through routine maintenance on January 6th, which is 2 days before the crash. This could be a possible factor in the crash, only time will tell. Also of note is that the plane was the first 737 Next Generation plane purchased by Ukraine International Airlines.

There is clearly no generalized issue with the 737 aircraft, as it has carried over 12 billion passengers since it has entered service. That said, a technical issue could very well be the cause of the crash as was initially reported and if so, improvements or fixes will be made as is always the case when a fatal accident happens.

Ukraine International Airlines isn’t well-known this side of the Atlantic because they are a smaller airline, they have just two North American destinations (Toronto and New York), and they aren’t part of an airline alliance.

But they are a full-service legacy airline, not a low-cost or ultra low-cost carrier (not that that has anything to do with security norms—it obviously doesn’t), and have a fleet of 35 aircraft, 19 of which are 737s (almost all of them the 737-800 variant like the one that crashed.)

Both of us Flytrippers co-founders had the chance to take 2 UIA flights to return from Turkey in 2017 (Ankara-Kyiv and Kyiv-Amsterdam), and both were on 737s.

UIA is your average airline really, the planes were in good condition.

We really don’t want you to refrain from traveling and exploring the world after reading the details of this crash, because frankly, that would be irrational.

So in case you need some facts to reassure you that flying is still excessively safer than whatever you’re likely doing today, here are a few stats.

Did you know you were 3 times more likely to die choking on food than flying? True story.

Nearly 5 billion passengers flew in 2019, and less than 300 died (0.00000006%.) As recently as 2017, a full year went by with zero deaths on commercial airplanes. That means that literally any reason that caused someone to die in a once-a-year freak accident was factually more likely to kill you than flying.

Be careful on the road today; you should worry about that way more than about flying.

This tragic crash killed 176 people and it’s still unclear what happened. Did the plane have a technical issue (if so, it’s not a 737 MAX issue so what was it?,) or was the plane shot down? Will we ever know if the investigation is hampered by Iran’s refusal to collaborate with the US? Ukraine International Airlines is not an unsafe carrier, so hopefully, we can soon learn more about what happened.