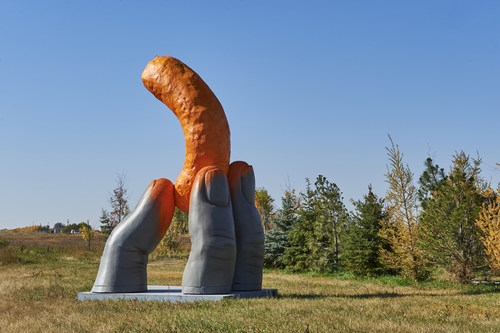 After a giant pinto bean character, a big pierogi on a fork, a giant sausage, and a huge Ukrainian-style Easter egg, Alberta is now home to a new food-themed statue erected a few days ago (for a limited time): a giant Cheetos.

Yes, you read that right! A giant Cheetos! Cheadle, a small rural community of less than 100 people east of Calgary, is now home to a giant Cheetos until November 4 as a way to celebrate of the famous orange dust (called Cheetle) that stains your fingers when you eat this cheesy treat.

No need to tell you that this unusual statue is all the rage on social media! Here’s what you need to know.

And don’t forget that Flytrippers spots flights to Calgary for as low as $100 roundtrip on its flight deals page now that ultra low-cost carriers are present in Canada!

A video of the giant Cheetos in Alberta

In recent days, videos and photos of a giant Cheetos held by 3 fingers covered in orange dust have taken over social media, including TikTok:

It’s easy to see why it’s making a sensation. Cheetos are a popular snack among Canadians, and who doesn’t love unusual roadside attractions like that?

The giant Cheetos is actually quite impressive. Standing at 5.2 meters tall, the statue was erected in the picturesque Alberta countryside, right by the side of the road, at 400 Railway Ave in Cheadle.

This isn’t the province’s first food tribute in the form of a giant statue either.

A giant pinto bean, a large pierogi, a huge sausage, and a gigantic Ukrainian-style Easter egg are a few of the many unusual food-themed statues that have sprouted in the Alberta landscape.

It wouldn’t be surprising that the giant Cheetos attracted many curious eyes, due to the popularity of Cheetos and the campaign orchestrated by multinational PepsiCo, owner of the Frito-Lay brand that produces the beloved snack.

By the way, a great way to travel for less (to visit all kinds of unusual sights, among other things 😉 ) is to buy your snacks — and all your food — with your American Express Cobalt Card, which earns 5X the points on your grocery and restaurant spending! When I joined the Flytrippers team, like most travelers, I didn’t know anything about travel rewards, but I’m already earning points so fast with this card, not only with this multiplier rate, but also with the monthly welcome bonus that’s really easy to reach.

Why was a giant Cheetos erected in Alberta?

As mentioned, the statue is meant to be a monumental tribute to the cheesy orange dust that inevitably colors your fingers when you eat Cheetos.

If you didn’t know, this fine dust has a name, Cheetle.

Surprisingly, the word actually made its way into the dictionary in early 2020. It’s defined as a “brand name for the powdery residue that gets on your fingertips while eating the savory cheese snack, Cheetos.”

So this campaign is also a way for PepsiCo to formalize that brand name (yes, Cheetle a registered trademark!) and promote Cheetle-covered products, including its Cheetos popcorn.

And what better way to do that than to erect a giant Cheetos statue in a city whose name is very similar-sounding to the name of the iconic orange dust?

Think about it: Cheadle, Cheetle… When you say it out loud, these two names sound very similar!

In recent years, it has been pretty common to see large unconventional monuments spring up around the world, such as the famous bridge supported by a giant hand in Vietnam (Vietnam and Thailand are open to all travelers now, and there’s a tip to save on flights).

The Cheetos brand wanted to put its own spin to this. While looking for the perfect place to erect their giant statue, they came across a small town in Alberta whose name was quite similar to that of their product: Cheadle.

The rest, as they say, is history!

The statue was unveiled in Cheadle in early October, and will stay there for a month, until November 4, after which it will be moved to the PepsiCo Foods Canada headquarters.

But until then, it’s a safe bet that more people will be exploring the small town of Cheadle!

Want more content to inspire you to travel the world?

A giant Cheetos statue appeared in the Alberta landscape recently, and if you like unusual attractions, you have until November 4 to see this statue in the small town of Cheadle, Alberta.

What would you like to know about unusual attractions here and away? Tell us in the comments below.

Introduction to the 7 Central American countries