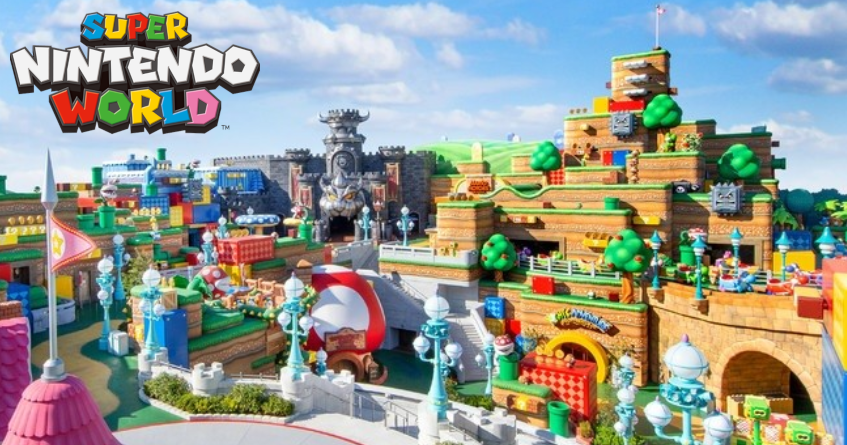 The long-awaited Super Nintendo World theme park is finally opening next week, after years of planning and months of delay due to the pandemic. Nostalgic fans of the classic gaming console will be able to have some fun in Yoshi- and Mario Kart-themed rides and attractions, with the Peach and Bowser castles towering over the whole area.

In other words, it’s the ideal spot for Nintendo lovers. I am not a video game or theme park fan at all myself, but I know many are so here’s a brief introduction with many photos.

Fittingly located in Nintendo’s home country, the first Super Nintendo World is actually an expansion of the Universal Studios Japan theme park, not a separate standalone park… and it surprisingly looks relatively small too, despite the C$690 million cost.

Other Super Nintendo World areas are also planned to open eventually in Hollywood (California), Singapore (Singapore), and Orlando (Florida)… but they are all many years away from being ready (no official timetables provided yet).

Just like the popular theme parks closer to home in Florida have all been open for months now (Walt Disney World opened in July), the new Super Nintendo World will be able to safely welcome guests with the customary hygiene measures and precautions starting next week (March 18th).

With Japan still planning to reopen to international travelers in time for the rescheduled Summer 2021 Olympic Games, maybe you’ll be tempted to make the beautiful Land of the Rising Sun your first destination once you’re ready to travel.

Before the pandemic, Flytrippers was often spotting amazing deals to Tokyo in the $400s roundtrip from many Canadian cities.

We’ve seen those prices continue all year long (in fact, I had booked an insanely-cheap $300 roundtrip flight to Tokyo myself, but unfortunately Japan isn’t one of the many countries that have reopened) so it’s likely that it will still be very affordable to fly to Japan once you’re ready to travel.

(But only if you’ve followed our important tips on how to prepare to jump on a deal.)

But as I explained in our ranking of the cheapest destination to travel to (the 40 countries where C$30 per day is all you need), sometimes you’re better off paying a bit more for your plane ticket to go somewhere where the cost of living is lower… to save money overall (like for example in all of Southeast Asia).

That said, Flytrippers’ other co-founder Kevin was surprised by the fact Japan was a bit cheaper than he expected for such a rich country, but that was in early March 2020 when the coronavirus had started to impact the number of travelers to the beautiful country even if the World Health Organization still did not recommend travel restrictions at that time.

Here is a promotional video for the park.

There are only 3 rides:

But in a way, just walking around the Mario world brought to life is an attraction itself.

The flagship attraction is the Mario Kart roller coaster.

Yoshi is a milder Omnimover-type ride (a scenic stroll).

And finally, the Power Up ride is a kind of treasure hunt around the whole area.

At Yoshi’s Snack Island, you can eat the famous Koopa Troopa shells… but you won’t be eating actual turtle, it’s actually a baked calzone.

It has mushroom-shaped pizza bowls, burgers with a decorative Mario cap, and “?” block-shaped tiramisu (among other options).

You can get a Mario cap-shaped dessert too.

Finally, the souvenir shop called 1UP Factory will be plumber-themed to fit with Mario’s profession.

Here is a map of the area, located at the northern end of the park.

You’ll certainly appreciate all the decorative elements if you’re a fan of the classic Nintendo games.

Universal Studios Japan is outside of the city of Osaka, Japan’s 2nd-largest.

The Fairfield by Marriott Osaka Namba hotel is not too far from the park: you can get 7 free nights there with a travel buddy with the Marriott Bonvoy™ American Express® Card‘s welcome bonus. It’s not as much as getting 17 free nights in Bali or 10 free nights in many more destinations, but it’s still not too bad of a deal for Japan, which is a more expensive country.

Getting to Super Nintendo World

Our Flytrippers multi-ticket itinerary trick often works for smaller/less popular cities around the world, so to save money, you are often better off buying a flight to Tokyo and then buying a separate Tokyo-Osaka flight than buying a ticket to Osaka directly.

While trains are a very convenient way to get around Japan and trying the shinkansen bullet-trains looks fun, flying is actually cheaper usually (about ≈ C$67 for Tokyo-Osaka one-way flights).

If you have Avios points from the HSBC World Elite® Mastercard® or other Amex/RBC cards, that flight is even cheaper: just 6,000 Avios points and $8.50 in taxes on JAL. But valuation-wise, that’s not necessarily the best sweet spot with Avios.

Subscribers to our free travel rewards newsletter will soon receive our guide to the Avios program… and you can get our free cheat sheet with the 5 essential programs for Canadians—which includes Avios—instantly today.

The train could be more convenient than flying though: there is a Universal City Station directly on the JR West Sakurajima line. In fact, trains on the line even have a cool new design to fit with Super Nintendo World’s opening.

The Super Nintendo World theme park is opening next week in Japan and is will become a pretty unique attraction for fans of the classic Nintendo games.

What do you think of this Super Nintendo World theme park? Tell us in the comments below.

An Unforgettable Adventure In Hawaii

Travelers Will Have To Pay $2,000 For 3 Days In A Quarantine Hotel (And 6 Other Measures)

Around The World Itineraries: August 2018